A set of blog posts on SQL

An Englishman’s Home is his Castle 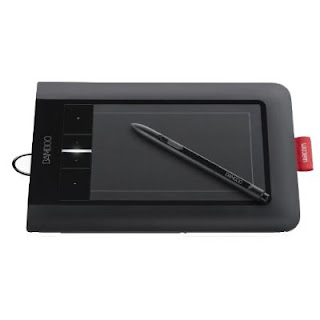 This is a tiny technology review. I recently bought a Wacom Bamboo Pen and Touch tablet, I say recently – I picked it up from the post office a little over 2 hours ago!

I used a Wacom tablet extensively as a mouse replacement at work some years back, and rather liked it. I only gave up because I moved into industry from academia and they are a bit more fussy about what I attach to the PC with which I am provided. At home the pen interface didn’t work quite so well because at the time I was quite keen on computer games, first-person shooters in particular, and controlling the little man in such a game using a pen is exceedingly challenging, to say the least.

The big benefit of a pen interface to my mind is that I can hold the pen whilst typing, then when I need to do some “mousing” I don’t have to scrabble around for the mouse. The whole process is just much smoother.

Unlike my original Wacom tablet this model will accept both pen and touch (with your fingers) input – I must admit I’m not really anticipating using the touch input. It appears to support the range of multi-touch gestures that a smartphone will accept. The active area of the tablet is roughly journalists notepad size which makes it small for an artist type tablet.

In terms of software, the installation attempts to guide you into some spoken tutorials which treat you like a moron – praising fulsomely your every successful pen-stroke. None of this is actually necessary since using a pen is largely intuitive and all you really need to learn is what the right-click simulation is (it’s the button on the body of the pen) and what the configurable buttons on the tablet do.

I have the tablet installed on a Windows 7 system, which is “ink” aware – it understands interacting via a pen: A little palette will pop out wherein the miracle of the “handwriting recognition” is performed – being able to read my scrawl is impressive but it’s a bit like a talking dog: it’s very clever but ultimately pointless on a computer with a keyboard. Office 2007 is also ink aware, you can open up a document and scribble on a separate layer – obviously the first thing I did was draw a big circle around something and wrote “bollocks” next to it. 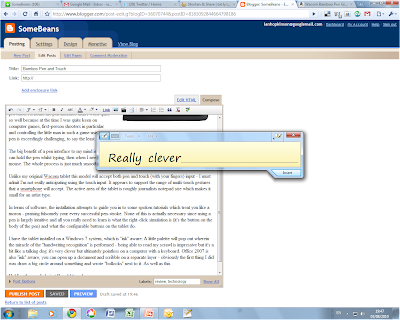 The tablet also comes with some little mini-apps in which you can doodle and play games, you can also download more mini-apps. They don’t look fantastically useful.

All in all I think we’re going to be happy together – holding the pen feels just like old times!