Book review: Numbers and the making of Us by Caleb Everett 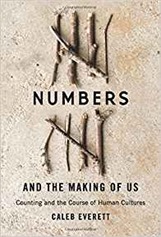 My next read is Numbers and the Making of Us by Caleb Everett. It is a book about our innate numerical senses, and how we developed skills beyond them that are enabled by the language of numbers.

The book starts with an overview of numbers in writing systems. Highlighting that ways of recording numbers, in the form of tallies, appeared before full blown language. Tallies seem to be evident in prehistoric artefacts before being found in the Fertile Crescent where they were used to record quantities of grain and the like in early written languages. Later in the book Everett proposes that “static” agriculture drives the development of numerical language, citing as evidence the fact that the few remaining hunter-gatherer societies have fewer number-words than their agricultural counterparts. He suggests that as specialisation due to agricultural occurs, it becomes necessary to record amounts of food so that they can be bought and sold (or exchanged for other goods).

I was interested to read that many human number systems are quinary, decimal or vigesimal, or put more simply based on 5, 10 and 20. This relates to the number of fingers and toes we have, our number words are linked to the numbers of our fingers and toes because they are used for counting. In some languages the link to fingers and toes is explicit, whilst in Western European languages it is not. Vigesimal vestiges remain – in English the number 20 has it’s own special word – score. And in French eighty is quatre vingt and ninety is quatre vingt dix. Later in the book, Everett suggests that our bipedalism helps with the development of counting – our fingers being relatively available (unlike toes) and also important because of our use of tools.

Numbers don’t just come into language in the form of numbers, they can be inferred in the plurals of nouns, or in the forms of verbs. In English we are used to the idea of adding an “s” at the end of a word to make a noun a plural. This is common across many languages. Plurals can also be formed with prefixes (at the start of the word), and even “Infixes”. For example in the Tuwali Ifugao language woman is babai but women is binabai. The plural is formed by adding –in- within the word. But not only this, number can be indicated in the conjugation of forms, and pronoun forms. English is a bit sparse in this regard, other languages have pronouns indicating two or three people as well as just the English divisions of one (I) and many (we).

It seems we have an innate, “exact” number sense for numbers up to three. Beyond three we have a innate, fuzzy number sense meaning we can tell when objects groups are more than or less than one another but where we cannot accurately subject the numbers of objects in a group. Beyond these two senses is a matter of learning.

The evidence for this comes from a number of places, the first of these are experiments with people from anumeric Amazonian tribes and Nicuraguan home signers, who are also anumeric. By anumeric, we mean that they do not have number words beyond three. These people are able to distinguish small numbers exactly but become increasingly inaccurate beyond 3.

A second strand of evidence comes from the investigation of numeric ability in children, some as young as 48 hours old! Although older children can be questioned directly in spoken language regarding numbers, for younger children it is necessary to use indirect methods. In particular, researchers can track gaze, and watch the absence of sucking on a dummy. Children (and adults), turn their gaze to things they find interesting or unusual and will stop chewing/swallowing/sucking as well. An example experiment in this area is to hide an object behind a screen, and then pretend (or not) to add a second object of the same type, or remove the object. If the child shows excessive gaze, or reduced sucking then it is inferred they are surprised by what they see when the screen is dropped again. That’s to say if they see 2 objects when they expected 1, or vice versa. This surprise implies the ability to count.

Evidence for the exact and fuzzy number sense is also found in experiments on animals. Although some animals, following much training appear to be able to count exactly beyond 3 they are rare. Otherwise they show the same types of innate abilities that we have.

Language is the enabler for exact counting beyond three, clearly sometime in the past one or more humans has learned how to count. Embodying this ability into language enabled it to be transmitted to other, less gifted humans.

I found this book really fascinating, interested, as I am in both words and numbers.