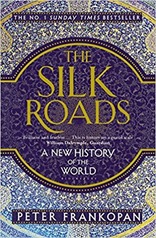 The Silk Roads: A New History of the World by Peter Frankopan. A panic buy for holiday which I have only just gotten around to reading, it was recommended by a colleague after we’d talked a little about the East India Companies and the development of trade.

Frankopan’s twist is to consider the history of the world focussing on the Silk Road routes which run from Europe though to China. The centre of this route is the Middle East rather than Western Europe where histories more traditionally focus. In the early years trade didn’t run continuously from Western Europe to China, it met somewhere near the centre with merchants trading between their home countries and the centre, somewhere close to Baghdad.

The book is arranged chronologically in chapters with the geographic focus allowed to drift as the events dictate. Each chapter describes a set of related events, and feels free-standing. The emphasis is very much on the flow of trade, people and invasion. It feels like we rarely sit in one place and allow events to unfold there.

Somewhat to my surprise the book covers pretty much all of human history from the time of Alexander the Great to the 21st century wars in Iraq and Afghanistan. The coverage is very big picture, it isn’t too interested in individuals, battles or places but the broad sweep.

The story starts with the rise of the Roman Empire, followed by the influx of Christian thinking in the later Roman period, then comes Islam, rising up from the south. Next come the Vikings, and the fur trade from northern Europe into Baghdad driven by the wealth in the region. The Vikings were to become the Russians (from Rus for red). The Vikings were keen slave owners which led to a trade in slaves (Slavs is derived from slave). The Italian greeting Ciao is a contraction of “I am your slave”. At its peak the Roman empire was taking 250,000-400,000 slaves per year and the Middle East took more than that.

Trade with the Middle East meant that Arabic coinage was found throughout Europe in the latter part of the first millenium. King Offa (fairly local to me in Chester with Offas’s Dyke just down the road) made coinage with (bad) Arabic on its reverse.

The Christian empire began a revival in the 10th century, leading to the Crusades. Italian city states (Venice, Genoa) were vying for supremacy in the region at the time. Their trade deals are reminiscent of those struck by the East India Company much later.

They were stopped by the rise of the Mongol Empire, which only narrowly failed to invade Western Europe. The Mongols, despite their reputation, were highly organised and implemented low taxation on goods passing through their Black Sea ports. The long distance sea routes were important because they enabled goods to travel untaxed but for their origin and destination, rather than at each country on the way. There then followed the black death, which killed upwards of 75% of the population in some cities. It led to rises in the wages of the surviving workforce.

At this point, in the late 15th century Western Europe finally came to the fore, with the Portuguese and Spanish conquest of the New World and Vasco de Gamas sea route to India bringing in huge wealth in the form of gold and silver (and decimating the American people with violence and disease in the process). By the 17th century the focus in Europe had shifted to the northern countries like the Netherlands and Britain and their trading activities in the Middle East and India.

Moving into the 19th century, Britain started to see Russia as a threat to its Indian Empire. The First World War comes as the Ottoman Empire falls and Britain finds itself siding with Russia against the Germans, somewhat surprisingly given the historic good relationship with Germany. Oil starts to become important, Britain gains oil concessions in Persia in the run up to the First World War. The increased usability and efficiency it brings to the navy is seen as critical to holding the Empire together. After the First World War the French and British divide up the Middle East in the (secret) Sykes-Picot Agreement.

Part of the expansion of the Roman Empire was access to the grain reserves of Egypt, echoed in the 20th century by the (failed) German invasion of Russia. The German aim was to take the grain belt of southern Russia to provide desperately needed food for the fatherland. Chillingly they realised this meant the death of millions, and they were determined it would be Russian millions. As it turned out they ended up killing the Jews in the Holocaust, prefigured by their long persecution of them.

The remainder of the book covers the post-World War Two period and revolves around oil, the decline of British power, the rise of Russia, the US, and the Arab states – finally benefiting from their oil wealth in the 1970s. This comes into my living memory so I tend not to consider it history. It is salutary to be reminded how the events we see unfolding today have very deep roots in history.

I found The Silk Roads fairly readable although a bit of a slog until I realised that the main text finished about two thirds of the way through the book to make room for the extensive notes. I would have welcomed a big pull-out map to locate the many cities mentioned, and a timeline.