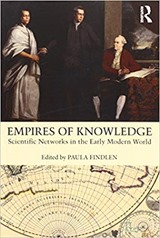 My next review is on Empires of Knowledge: Scientific Networks in the Early Modern World edited by Paula Findlen. Here I find myself venturing a little further into academic history of science than I am entirely comfortable with!

Empires of Knowledge is a collection of essays. Its focus is on networks, and it was stimulated by Stanford’s project on mapping the Republic of Letters. The introduction cites Francis Bacon’s New Atlantis, inspiration for the Royal Society but Findlen focuses on the network which brings the knowledge of the world to Bensalem (the location of this fictional Atlantis).

The first chapter is by Robert Morrison, entitled A scholarly intermediary between the Ottoman Empire and Renaissance Europe. It concerns Copernicus and how he potentially was exposed to Arab astronomers whilst at Padua University. More widely it talks about diffusion mechanisms from the Ottoman Empire through Jewish intermediaries to Europe. I felt it could have done with some lists of actors, and network diagrams. I suspect this is why I’m not a historian.

The second chapter is by Findlen and concerns the Jesuits and their network starting in about mid-16th century. The Jesuits saw scientific knowledge as a supplement to their missionary work. This worked two ways, sharing knowledge from Western Europe to the far flung places they visited was a benefit in their missionary work but they also saw collecting new scientific knowledge and bringing back to Rome as important too. The chapter also talks about some of the travails of trying to coordinate observations across large distances with sometimes inexpert collaborators. The simple passage of a letter from Japan to Europe could take 3 or 4 years. “Scientists” outside the Jesuits saw the potential of this organisation for gathering knowledge. It struck me that the Jesuits rose before New Atlantis was written and before the Royal Society and the Academie des Science in France were founded, these could be seen as secular equivalents.

The third chapter continues the Jesuit theme discussing the Ignatian Tree by Marcelo Aranda, an illustration in Athanasius Kircher’s book “The Great Art of Light and Shadow” which showed the 466 missions of the Jesuit church in 1646 as a tree. Also included were sundials which showed their location as determined by lunar eclipse measurements – a method for finding the longitude but only relevant for fixed locations. Determining the date of Easter was an astronomical problem which had been partly resolved by reform of the calendar but in the 17th century there was some risk of celebrating on the wrong day due to the effect of time zones.

Next up is a chapter by Carol Pal on Samuel Hartlib, called The Early Modern Information Factory: How Samuel Hartlib turned correspondence into knowledge. Hartlib was active in the years just before the Royal Society was founded and kept an expansive correspondence network. He republished within that network but also made work available in print (sometimes to the ire of his correspondents). He left approximately 5000 letters in his archive currently at the University of Sheffield and it is likely that amount is doubled if letters from him in other archives are considered. This seems to be typical of the size of the correspondence of such actors. In a time before scientific journals were published his imprimatur was seen as a sign of quality. The chapter also discusses how such men usually employed scribes to keep up with the level of correspondence, in the absence of photocopiers or word processors.

There’s a certain repetitiveness in my paragraphs, this next one is on the chapter by Iordan Avramov on “Letters and questionnaires: The correspondence of Henry Oldenburg and the early Royal Society of London’s Inquiries for Natural History”! Inquiries for Natural History were essentially surveys containing questions on all manner of topics sent out to correspondents. These were used to elicit information, their consistency allowed for information to be verified and monitored over time, and their very existence provided correspondents with a framework in which to reply – they were not faced with a blank page. The Inquiries also had the function of expanding Oldenburg’s network. He could send out a questionnaire to one of his existing correspondents and ask that they forward it on to someone else if they could not reply.

Ingenuous investigators by Ivano Dal Prete, a vignette on the activities of Antonio Vallisneri (1661-1730) who was a member of the Republic of Letters but corresponded mainly with local contacts in Northern Italy. The point Dal Prete is making here is that although distant lands get the headlines, the Republic of Letters was fractal, what was visible on a global scale was also visible locally. In the late 17th century even Europe was to some degree terra incognita. Del Prate reports that Vallisneri never visited a local (17 miles away) fossil location, the travel was hard in the mountainous area and the natives were hostile.

Corresponding in war and peace by Elise Lipkowitz covers the communications of Joseph Banks and Charles Blagdon during the Peace of Amiens in 1812/13, a brief period in which France and England were not fully at war. This includes some numerical work the volume of transactions. The Peace was fairly tense and the character of the correspondence is cagey compared to earlier periods. Much of the correspondence is between Banks and Blagdon, who was in Paris for the whole of the Peace.

Giant bones and the Taunton stone by Lydia Barnett is about the reception in London by the Royal Society of communications from Cotton Mather in 1712 regarding fossil bones, now believed to be of mastadons, found in New York state and the “Taunton Stone” an inscribed stone discovered in Massachusetts. Mather spent much space in his reports analysing the fossils to a cool reception by the Royal Society – they were much more interested in getting hold of the specimens for their own inspection and interpretation. The Taunton Stone, on which Mather had written much less, raised much more interest. Illustrations (although poor) allowed them to make their own interpretations, and gave access to a history of North America. This was to be used to rationalise the colonization of the area, and the persecution of the native Americans.

The tarot of Yu the great by Alexander Statman reports on investigations into China as the source of all ancient knowledge following an appreciation of the length of its recorded history.

Spaces of circulation and empires of knowledge by Kapil Raj talks about the importance of local knowledge, and local experts in India. Both in William Jones work on comparative linguistics and also James Rennell’s mapping of India. Raj prefers to talk about “spaces of circulation” rather than networks. This seems to be based on an assumption that links in a network must either exist or not exist, my more mathematical view of networks is that links can have weights which may indicate distance or frequency of contact, or any number of attributes.

Recentering centres of calculation by Matthew Sargent continues this theme with a discussion of Van Rheede’s Hortus Malabaricus, a volume on the plants of the Far East. It highlights the varied loci of activity, the book was written mainly in the Far East but published in Amsterdam. Plant samples, and drawings of plants could circulate, travelling the networks of knowledge, without carrying with them the context in which they were collected or the native uses of a plant.

The Atlantic World Medical Complex by Londa Schiebinger traces the path of “bois fer” in a treatment for yaws, a tropical infection. The story brings together medicine as practised in Europe, Africa and the Americas and the difficulties in tracing the contributions made by slaves and native Americans given their position. It also highlights how difficult it can be to be sure of the identity of plants such as “bois fer” at such great separation in time – particularly when the participants at the time were not clear.

The final chapter is Semedo’s Sixteen Secrets by Benjamin Breen, this refers to the medical works of João Curvo Semedo (1635-1719), a Portuguese physician. He collected the elements of medical preparations from around the world in particular those areas which had been under Portuguese writings. The interesting side to his writing is that although much of the material he recommended was fro outside Europe, the authorities he cited for their use were Western European.

The book finishes with epilogues by three different authors who do something similar to what I have done here. The format of the book, a set of 20 page chapters, helped me along. Each presents a single thesis, and if I didn’t get along with the author’s style the next chapter came up soon enough. I’m glad I read it but I’m going for something a bit easier next!