Book review: Much ado about mothing by James Lowen 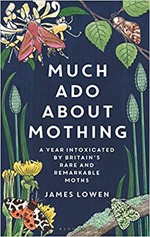 Excited by my recent purchase of a trail camera to observe the wildlife in our backgarden (mainly foxes), I was draw to moths (and mothing), like a moth to a flame or a pheromone lure (it’s the modern way). Much Ado about Mothing by James Lowen speaks of a similar attraction, structured into a book.

Much ado about mothing is based around the idea of finding 120 target months over the space of a year. It is divided into chapters that track through the seasons and through different ecosystems such as heaths, beaches, salt marshes, forests and so forth. I was pleased to see my home county of Dorset, particularly Portland and the heaths around Purbeck where I grew up, featuring heavily. Over the period of a year Lowen ran a light trap in his back garden in Norfolk on 151 nights, capturing 15,000 individuals from 466 species as well as travelling far and wide in Britain to find moths.

Moths are the super-group in which butterflies are a subset. They are more numerous in terms of species than butterflies by a large margin – perhaps 40 times as many moth species as butterflies. Many of the females are flightless (making them more difficult to find). 90% of moths are nocturnal.

Unlike butterflies, moths are quite docile when trapped and can be handled. The Victorians used sugar and wine mixtures on ropes ("roping") to trap their moths, as the 20th century progressed it became possible to use portable lights and most recently pheromone lures to trap moths. Pheromone lures are used in crop protection and are specific to a species, they mimic the pheromones that females emit to attract males.

As well as the moths with which we might be familiar there are innumerable micromoths typically with only a Latin name, there’s a discussion amongst moth-ers on how (and if) to give them "common" names.

It seems many moth-ers got there from birdwatching, and many RSPB centres double up as centres for mothing. Perhaps it is the easy abundance of moth species which attracts them and the rather better accessibility than birds – you can keep moths in your fridge to share with fellow moth-ers! Around the country there are a number of conservation projects focused on moths these seem to be coordinated by the charity, Butterfly Conservation.

The picture for moths as a group is mixed, many species are in decline as a result of habitat loss. In addition to draining of marshlands, agriculture and rising temperatures, many have very specific host plants, so the loss of the host plant leads the loss of the moth. I wonder why this specificity is favourable from an evolutionary point of view. There are new arrivals though, and territories expanding as temperatures rise.

I found myself Googling pictures of the moths mentioned, there are colour photos of some of the moths but they are all bundled together in the centre of the book. Lowen works hard to describe moths in many varied and interesting ways. You might want to follow the @BritishMoths twitter account for a regular fix of moth content. You can get an overview of British moth species on the Butterfly Conservation A-Z page, species mentioned in Much ado include Clifden Nonpareil, Elephant Hawk-moth, Kentish Glory, New Forest Burnet, Oak Eggar, Buff-tip and Merveille du Jour. I recommend this page as a perfect supplement to the book!

Much ado about mothing is more in the style of a travelogue than a nature book but I suspect this means it sneaks in many facts about moths which you wouldn’t find by reading a moth identification guide. I have learnt that Batesian mimics are those species that mimic other, toxic, species whilst Mullerian mimics are genuinely toxic. This I learnt in the discussion of Clearwing moths, a group of moths that mimic wasps.

The other prominent aspect of the travelogue style is the people he meets, mothing seems quite a sociable sport. Sometimes this is because the fellow moth-er is a warden at a nature reserve but other times it is a group of friends, or moth  enthusiasts who share sightings and information – as well as camping out in all manner of locations to look after moth lights.

I think Much ado has done its job since I’m now keen to start my own mothing. I bought a telescope as summer approached – it doesn’t get dark until really late and we had a small child – so observing the night sky was tricky. I’ll not make that mistake again! Moths are most common during the summer months, there is little point in buying a moth trap for Christmas so I will get mine in late Spring.