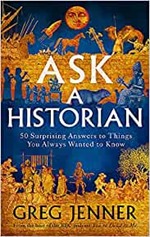 Ask a historian by Greg Jenner is a bit of a change of tack for me. It is a list of 50 questions to a historian, Greg Jenner. Each answer is conversational in style, a couple of thousand words at most, pitched at a level that my fairly bright 10 year old would understand although the content is such that I would be judicious in just sharing it with him. Jenner works on the TV series Horrible Histories which, amongst other things, puts historical incidents to modern pop tunes. It is highly educational and a firm favourite for all ages in our household!

Fifty questions is more than I can review individual, so I will simply outline the style of the questioning and highlight some of my favourites. They are divided into 12 thematic chapters with 4 or 5 questions in each chapter.

2 – Is it true they put a dead pope on trial? Yes, it is true, a subsequent pope dug him up in order to do this! The papacy was a fairly wild institution particularly in the 9th century AD with a total of 24 popes in the period 896-904. Contrasting with a total of 5 in my 50 year life. The 9th century popes did not die of natural causes, their successors helped them along the way.

3 – Atlantis proves aliens are real? – There questions that make Jenner angry (not at the questioner), this is one of them. Jenner’s concern is two-fold on this, the first is the implication that non-Europeans couldn’t possibly have done all of these magnificent things – it must have been aliens – which is rather insulting. Secondly, the alien conspiracy theories often have their roots in Nazism.

6 – When was the first Monday? No historian likes to be pinned down on a "first" but the origins of the days of the week go back a long way. There is some evidence that the Babylonians used a seven day cycle, it fits neatly into the Lunar month, but the seven day week was definitely in place by 2,500 years ago with the Jewish religion celebrating a Sabbath every seven days. There were other options, the ancient Egyptians celebrating a ten day week Etruscans and early Romans following an 8 days week (labelled with letters A to H).

8 – When did birthdays start being celebrated? It is comforting to realise that we’ve been celebrating our birthdays for at least 2500 years. A birthday party invitation was found at Vindolanda, a Roman fort on Hadrian’s Wall.

15 – How old is curry? I found it interesting that the heat we most associate with curry, produced by chillies, is the result of an import from South America. Also it is a bit chastening that "curry" is largely an invention of the British, a bastardisation of  a very diverse Indian cuisine.

19 – Who names historical periods? This turns out to be a surprisingly difficult question, historians don’t necessarily agree on the extents of a period (like the Long Eighteenth Century), periods do not neatly delineate time – they overlap, and vary across the world. Periods like "Victorian" are ridiculously large and encompass massive changes in social and economic conditions. Finally, the inhabitants of a period may be unhappy with where they have been placed – the Tudors would not have liked being called Tudors.

23 – When did we start keeping hamsters as pets? All I can say on this question is that hamsters are creatures full of rage.

45 – Where names for places in other languages come from? I liked this question, in large part because I remember travelling out of Pisa on a bus wondering why I’d never heard of the obviously large city of Firenze which I kept seeing on signs (it is the city I know as Florence). The names locals give places are endonyms and those that foreigners provide are exonyms. In the days of rapid and communication, essentially since the beginning of the 19th century there has been a tendency for exonyms and endonyms to be one and the same, give or take a bit of pronunciation. Bécs is the Hungarian name for Viennna, known as Wien by the Austrians. Vienna was at the border of the Magyar empire, and basically they called it "gateway".

49 – Why do we care so much about the Tudors? I liked this question because it hints at something I have seen elsewhere about Newton, and it occurs regarding Anne Boleyn’s purported 3rd nipple in an earlier question in this book. These stories were promoted by supporters or opponents in the years after a dynasty or person had died because they supported a preferred narrative and their influence persists for centuries.

The book finishes with a rather nicely crafted Recommended Reading section, and perhaps this is the point of the book – not as an end in itself but an introduction to a range of books for a more in depth view. Ask a historian would be an excellent holiday read, I must admit I prefer something more substantial on a single subject.