Off to Llanferres yesterday for an autumn walk through the woods, along the ridge and back again. You can see the route here:

It’s a variant on a route in “Walking in the Clwydian Range” by Carl Rogers. A tiny domestic detail: whilst walking the Inelegant Gardener carries the guide book, preferring to navigate via prose and I carry the OS map – preferring maps. The track is from a Garmin GPS60, I don’t use it for navigation but to tag my photos with location information for which I’ve written a little program.

We last did this walk in May, but I committed a terrible faux pas: the battery on my camera went flat and for some reason I’d not brought a spare and had deliberately left behind my second camera and my phone (which also has a camera, which is really crap).

Beech trees were definitely the best for autumnal colours, although birch produces an attractive pointillist effect, sycamore seemed best for kicking through. 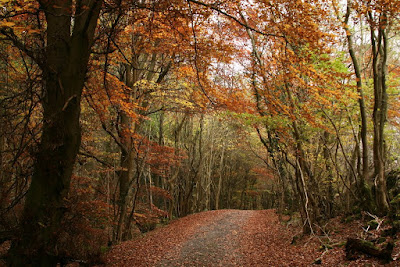 At the top of the initial climb there is a little bit of limestone pavement, this is most famously found above Malham Cove but it’s nice to find your own little patch. 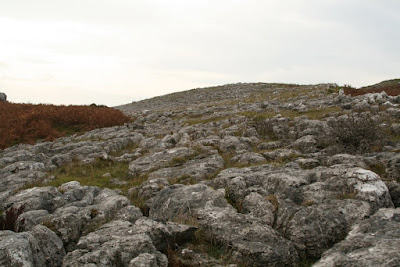 Limestone pavement is formed when slightly acidic rain water dissolves the limestone producing deep fissures (grykes) between remaining blocks (clints). It looks like a fantastic place to break your ankle.

For reasons I can’t explain I like the stray bits of ironwork left over from old fencing, parts of the Lake District are particularly good for this. 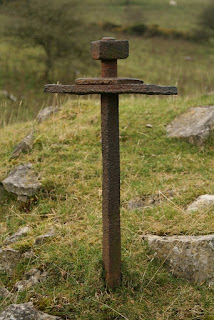 And to top it all off, a cow wearing a ginger wig: 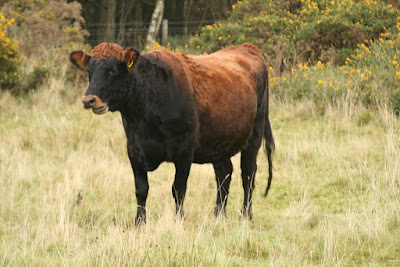 This was one of many cows in a field we passed through, they were fine looking beef cows in a wide range of colours. We also had a “That’s no cow, it’s a bull” moment but I was reassured by remembering vaguely someone saying that you’re okay in a field with a load of cows and a bull because the last thing on the bull’s mind is going to be you. If this isn’t actually true then I’d prefer to be left in ignorance, if you don’t mind.