An Englishman’s Home is his Castle

Journalists unable to cope with the conditional?

A piece of land

I am the under-gardener to The Inelegant Gardener, more specifically I am the under-allotmenteer. For those outside the UK, allotments are standard sized vegetable gardens enshrined in UK law. We took possession of our first half allotment plot on 1st October 2006.  I remember our visit to the colony to see the allotment; we’d taken our traditional Saturday morning wander around town when The Inelegant Gardener mentioned, apparently in passing, that she’d like to look at an allotment (or rather a half-plot). I was instantly wary of this idea, I remember watering and weeding on my dad’s allotment as a child, back breaking and boring work. But when I stood at the foot of the overgrown plot I was instantly converted. A strange feeling came over me, of land, food, honest toil and soil – it was like my own Soviet propaganda film. Here I could work the land and provide! 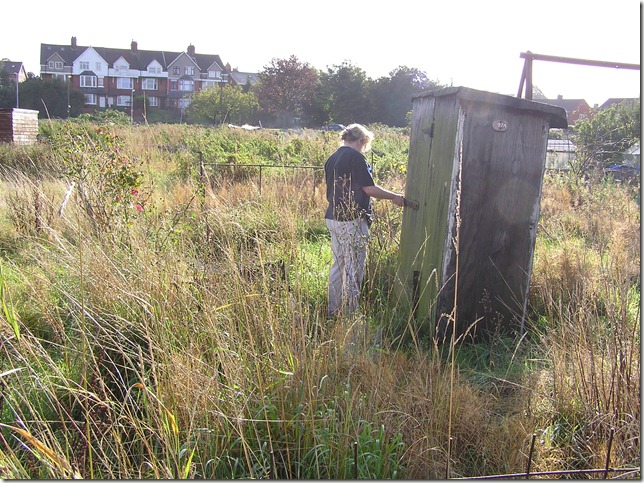 The half-plot on possession, October 2006

But more was to come: walking back to the car some months later, after working on the half allotment, I pointed and laughed at the risible start someone had made on digging a neighbouring whole plot. A sheepish Inelegant Gardener admitted to being the owner of the risible start and a new whole plot. It turns out she was an aggressive territorial expansionist, albeit a pathetic digger. The Inelegant Gardener did her best “feeble female” look, and I agreed to dig the new allotment. A task I was to complete some 18 months later, almost exactly two years ago. 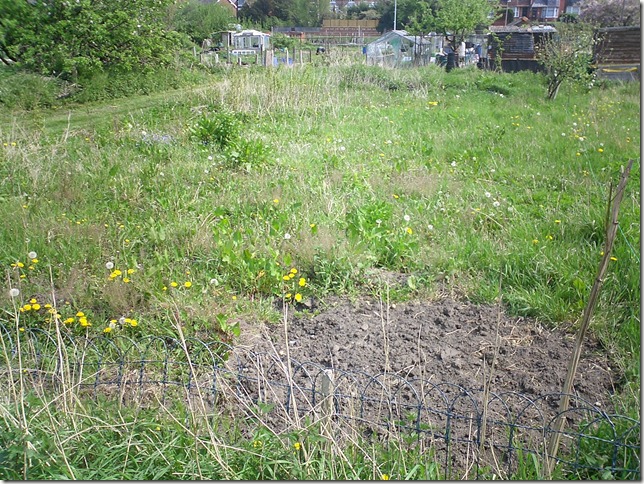 A risible start to the digging of the whole plot, April 2007

As under-gardener my principle tasks are digging and construction: sheds, paths, compost bins and the like. It’s rather satisfying work compared to my day job, which mostly concerns generating abstractions inside a computer. Allotment work produces tangible output: an hours digging produces a patch of turned soil and a bucket of roots. Construction produces sturdy, useful structures of which a man can be proud. As a result of this toil I am able to identify perennial weeds purely from their roots: dock, bindweed, nettles, couch grass, horsetails, ground elder. I sometimes worry that The Inelegant Gardener will pimp me out to other allotmenteers for digging work.

The Inelegant Gardener is still subject to unrealistic fancies, having directed me to spread about a ton of farmyard manure on the potato-patch-to-be she seemed to believe the worms would quickly incorporate it into the soil. Bollocks would they, not in two weeks, not without the aid of little squad of wormy JCBs! It was muggins wot’ dug in the manure. I still think potatoes are magic though, turning over the soil with a fork and white egg-shaped edible things appearing – it’s magic. More realistically the potatoes came out all manner of shapes and sizes, several years they suffered from blight.

For us allotmenteering is a bit of fun, if a crop fails it doesn’t matter. Seeing the blight-wilted potato-tops and unearthing the rotten, stinking tubers gives an insight into what it is to rely so closely on the vagaries of nature for your livelihood. Seasonality becomes much more obvious; despite being relatively clued up about agriculture in truth I had little sense of when what vegetables were in season. Now I know, and it’s cabbage for most of the winter. Currently in season are courgettes (bloody hundreds of them), carrots, sweetcorn, potatoes, mangetoute, French beans, raspberries, beetroot. It’s fair to say we haven’t entirely cracked planting appropriate quantities, to start with we had one or two exemplars of any particular vegetable per meal, now we have massive, short-lived gluts.

We achieved a crop on our second visit to the allotment or rather Henry, a fellow allotmenteer, gave us some produce to keep us interested. He has continued to provide advice ever since, but now we swap vegetables and fruit. When we started only a small fraction of the plots on our colony were in cultivation, and Henry seemed to be keeping the place alive. These days most of the site is cultivated, it’s a friendly sort of place – most people will stop to say a few words as they pass on their way to their own plots. I can do a passable impression of a someone who knows how to grown stuff, if interrogated.

Our other neighbour at the allotments keeps chickens, at one point they had free range across the whole site they would come and supervise digging, jumping into the trench at inopportune moments to pluck out a tasty grub. Nowadays they are behind chicken wire, but still come to the fence if you’re digging or weeding by them, making approving clucking noises. There is something very reassuring about this companionship.

These days the allotment is looking almost ship-shape, at least it does when we’ve caught up with all the weeds. I continue to be proud of my construction efforts. 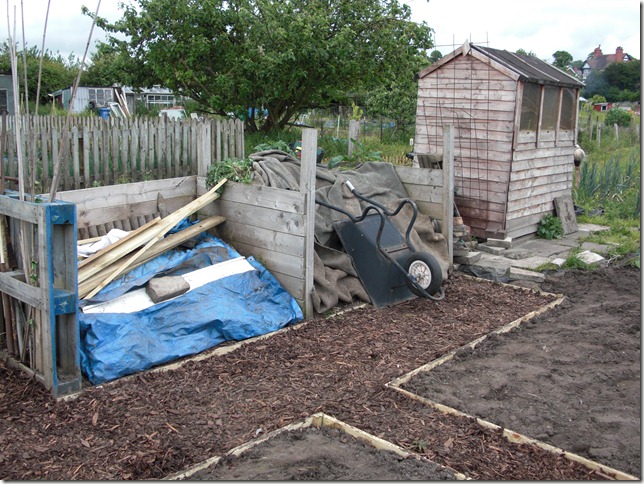