Book review: The Measure of All Things by Ken Alder

Book Review: The Chemist Who Lost His Head by Vivian Grey 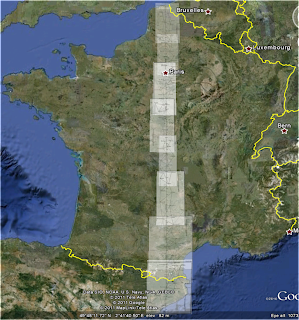 This is a short story about obsession: with a map, four books and some numbers.

My last blog post was on Ken Alder’s book “The Measure of All Things” on the surveying of the meridian across France, through Paris, in order to provide a definition for a new unit of measure, the metre, during the period of the French Revolution. Reading this book I noticed lots of place names being mentioned, and indeed the core of the whole process of surveying is turning up at places and measuring the angles to other places in a process of triangulation.

To me places imply maps, and whilst I was reading I popped a few of the places into Google Maps but this was unsatisfactory to me. Delambre and Mechain, the surveyors of the meridian, had been to many places. I wanted to see where they all were. Ken Alder has gone a little way towards this in providing a map: you can see it on his website but it’s an unsatisfying thing: very few of the places are named and you can’t zoom into it.

In my investigations for the last blog post, I discovered the full text of the report of the surveying mission, “Base du système métrique décimal”, was available online and flicking through it I found a table of all 115 triangles used in determining the meridian. So a plan is formed: enter the names of the stations forming the 115 triangles into a three column spreadsheet; determine the latitude and longitude of each of these stations using the Google Maps API; write these locations out into a KML file which can be viewed in Google Maps or Google Earth.

The problem is that place names are not unique and things have changed in the last 200 years. I have spent hours transcribing the tables and hunting down names of obscure places in rural France, hacking away with Python and loved every minute of it. Cassini’s earlier map of France is available online but the navigation is rather clumsy so I didn’t use it. Although now I come to writing this I see someone else has made a better job of it.

Beside three entries in the tables of triangles are the words: “Ce triangle est inutile” – “This triangle is useless”. Instantly I have a direct bond with Delambre, who wrote those words 200 years ago –  I know that feeling: in my loft is a sequence of about 20 lab books I used through my academic career and I know that besides an (unfortunately large) number of results the word “Bollocks!” is scrawled for very similar reasons.

The scheme with the the Google Maps API is that your program provides a place name “Chester, UK”, for example, and the API provides you with the latitude and longitude of the point requested. Sometimes this doesn’t work, either because there are several places with the same name or the placename is not in the database.

I did have a genuine Eureka moment: after several hours trying to find missing places on the map I had a bath and whilst there I had an idea: Google Earth supports overlay images on its maps. At the back of the “Base du système métrique décimal” there is a set of images showing where the stations are as a set of simple line diagrams. Surely I could overlay the images from Base onto Google Earth and find the missing stations? I didn’t leap straight from the bath, but I did stay up overlaying images onto maps deep into the night. It turns out the diagrams are not at all bad for finding missing stations. This manual fiddling to sort out errant stations is intellectually unsatisfying but some things it’s just quicker to do by hand!

You can see the results of my fiddling by loading this KML file into Google Earth, if you’re really keen this is a zip file containing the image overlays from “Base du système métrique décimal” – they match up pretty well given they are photocopies of diagrams subject to limitations in the original drawing and distortion by scanning.

What have I learned in this process?

You’ve hopefully learnt something of the immutable mind of a scientist!
View