Book Review: The Chemist Who Lost His Head by Vivian Grey 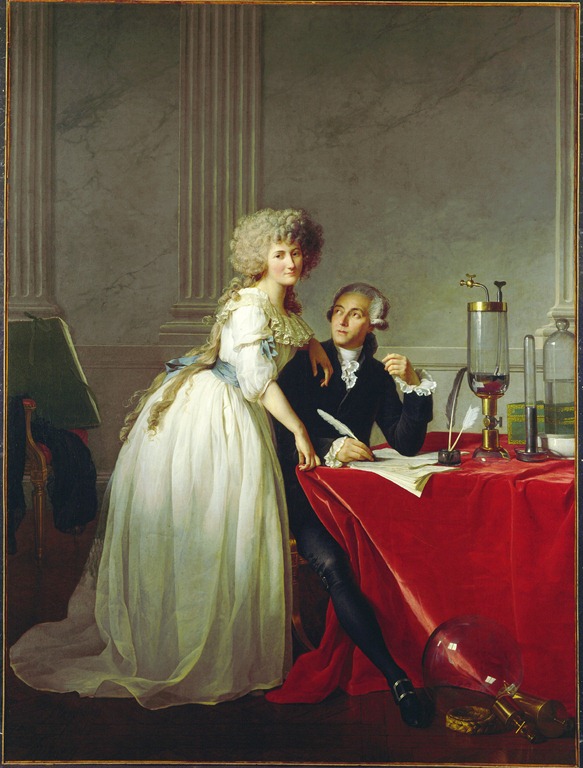 Following on from “The Measure of All Things” my interest in Antoine Lavoisier was roused, so I went off to get a biography: “The Chemist who lost his head: The Story of Antoine Laurent Lavoisier” by Vivian Grey. This turns out to be a slim volume for the younger reader, in fact my copy appears to arrive via the Jenks East Middle School in Tulsa. As a consequence I’ve read it’s 100 or so pages in under 24 hours – that said it seems to me a fine introduction.

Antoine Lavoisier lived 1743-1794. He came from a bourgeoisie family, the son of a lawyer, and originally training as a lawyer. Subsequently he took up an education in a range of sciences. As a young man, in 1768, he bought into the Ferme Générale which was to provide him with a good income but led to his demise during the French Revolution. The Ferme Générale was the system by which the French government collected tax, essentially outsourcing the process to a private company. Taxes were collected from the so-called “Third Estate”, those who were not landed gentry or clergy. Grey indicates that Lavoisier was a benign influence at the Ferme Generale, introducing a system of pensions for farmers and doing research into improved farming methods. Through the company he met his future wife, Marie Anne Pierrette Paulz, daughter to the director of the Ferme – Antoine and Marie married in 1771 when she was 14 and he 28.

Lavoisier started his scientific career with a geological survey of France, which he conducted as an assistant to Jean Etienne Guettard between 1763 and 1767. This work was to be terminated by the King, but was completed by Guettard with Antoine Grimoald Monnet although Lavoisier was not credited. There seems to be some parallel here with William Smith’s geological map of the UK produced in 1815.

Through his geological activities Lavoisier became familiar with the mineral gypsum, found in abundance around Paris. He undertook a detailed study of gypsum which sets the theme for his future chemical research: making careful measurements of the weight of material before and after heating or exposure to water. He discovered that gypsum is hydrated: when heated it gives off water, when the dehydrated powder (now called plaster of Paris) is re-hydrated it forms a hard plaster. He wrote this work up and presented it to the Académie des Sciences – the French equivalent of the Royal Society, on which I have written repeatedly.

He was to present several papers to the Académie before being elected a member of this very elite group at the age of twenty-five, half the age of the next youngest member. Once a member he contributed to many committees advising on things such as street lighting, fire hydrants and other areas of civic interest, the Académie was directly funded by the King and more explicitly tasked with advising the government than the Royal Society was. Lavoisier was also involved in the foundation of the new metric system of measurement, which was the subject of “The Measure of All Things”. Lavoisier became one of four commissioners of gunpowder – an important role at the time. During his life he would have had contact with Joseph Banks – a long term president of the Royal Society, and also Benjamin Franklin – scientist and also United States Ambassador to France.

From a purely scientific point of view Lavoisier is best known for his work in chemistry: his approach of stoichiometry – the precise measurement of the mass of reactants in chemical reactions led to his theory of combustion which ultimately replaced the phlogiston theory. It is this replacement of phlogiston theory with the idea of oxidization that forms the foundation of Kuhn’s “paradigm shift” idea, so Lavoisier has a lot to answer for!

The portrait of Antoine and Marie Laviosier at the top of the page is by Jacques-Louis David painted ca. 1788. It strikes me as quite an intimate portrait with Marie pressed against Antoine, looking directly at the viewer whilst her husband looks at her. Marie played a significant part in the work of Lavoisier, as well as recording experiments and drawing apparatus (something that takes good understanding to do well), and assisting with correspondence and translation  she was also responsible for publishing Mémoires de Chimie after his death. She was a skilled scientist in her own right. The equipment on the table and floor can be identified: on the floor is a portable hydrometer and a glass vessel for weighing gases. On the table are a mercury gasometer, and a glass vessel container mercury – likely illustrating the properties of oxygen and nitrogen in air.

Antoine Lavoisier was executed in 1794, for his part in the Ferme Générale. His execution is attributed, at least in part to the ire of Jean-Paul Marat, who Lavoisier had earlier blocked from membership of the Académie des Sciences. It seems Lavoisier had been warned by friends that his life was in danger but appeared to think his membership of the Académie des Sciences would protect him. Ironically Jacques-Louis David also painted “The Death of Marat”.

100 pages on Lavoisier was not enough for me, I’m going for “Lavoisier” by Jean-Pierre Poirier next – some fraction of which appears to be available online, but I’m going for a paper copy.