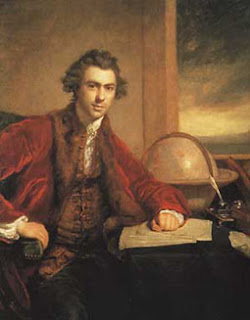 Once again I venture into my own idiosyncratic version of the book review: more reading notes than review. This time I’m reading the biography of Joseph Banks by Patrick O’Brian. Joseph Banks has popped up regularly in my recent reading about the Royal Society and the Age of Wonder. He was on Captain Cooks trip to Tahiti, and then went on to serve as President of the Royal Society for 42 years – the longest term of any President. The Inelegant Gardener has been reading about Kew and various plant hunters, and Sir Joseph crops up there too. Despite his many talents, there are relatively few biographies of Banks, and he is relatively unknown.

Sir Joseph was born of a wealthy family from Lincolnshire, he was educated at Harrow, Eton and then Oxford University. At some point in his school years he became passionately interested in botany, and whilst at Oxford he went to the lengths of recruiting a botany lecturer from Cambridge University to teach him. The lecturer was Daniel Solander, a very talented student of Carl Linnaeus, who would later accompany Banks on his trip around the world with Captain Cook, they would remain close friends until Solanders death in 1782.

Sir Joseph’s first trip abroad was to Newfoundland and Labrador in 1766. The area had been ceded to Britain by France, but there was an international fleet of fishing boats operating in it’s waters. Banks made his trip as a guest Constantine John Phipps on HMS Niger, which was sent to the area to keep an eye on things. It seems fairly common for gentleman to travel as guests on navy ships of the time: this was broadly the scheme by which Charles Darwin would later join HMS Beagle on his trip around the world.

1768-1771 finds Banks circumnavigating the world on Captain James Cook’s ship, HMS Endeavour, in Cook’s first such expedition. This voyage was funded by George III following an appeal from the Royal Society for a mission to Tahiti in order to observe the transit of Venus. Banks paid for the contingent of naturalists from his own funds. The stay in Tahiti is much written about largely, I suspect, because they remained there some time. Following their stay in Tahiti, they continued on to New Zealand, which they sailed around rather thoroughly but seemed to land on infrequently as a result of hostile responses from the inhabitants. They then sailed along the East coast of Australia, stopping off on the way at various locations but most particularly Botany Bay. At the time the the existence of Australia was somewhat uncertain in European minds. There’s a rather fine map of their course here and Banks’ journals are available here.

Through the chapters on both these voyages, O’Brian makes heavy use of the diaries of Banks, quoting from them extensively and often between block quotes further quoting Banks’ own words. This may work well for those of a more historical bent, but I felt the need for more interpretation and context. It often feels that O’Brian is more interested in the boats than the botany.

The next episode is somewhat odd: Banks was planning a second trip around the world with Captain Cook but he never went. At almost the last minute he withdrew on the grounds that the Admiralty would not provide adequate accommodation for him and his team scientists. The odd thing is that, despite what appears a fractious falling out, Banks appeared to remain very good friends with both Cook and Lord Sandwich, First Lord of the Admirality at the time. I wonder whether Banks, remembering the 50% mortality rate of his previous voyage with Cook, understandably got cold feet. As a consolation he went off to Iceland in 1772 for a little light botanising, where he scaled Hekla.

Despite recording an extensive journal, collecting a considerable number of anthropological, botanical and zoological specimens as well as a large number of drawings by his naturalist team Banks never published a full report of his Tahiti voyage. He showed the artefacts at his home in Soho Square and prepared a substantial manuscript, with many fine plates but seems to have lost interest in publishing close to the end of the exercise. Throughout his life he produced relatively few publications, this may be a reflection of his dilettante nature: he was skilled in many areas but not deeply expert and so published relatively little.

Banks was elected to the Royal Society whilst on his world tour, and later become President for a 42 year term, until his death in 1820. He made some effort to improve the election procedures of the Society, at the time of his election being in the right social class appeared to be more important than being a scientist. As part of his role as President he was heavily involved in providing advice to government including a proposal to use Australia as a colony for convicts. He was also heavily involved in arranging the return of scientists and others caught up in the wars following the French revolution. In addition to his work at the Royal Society, he also helped found the Africa Association and the Royal Academy.

Kew gardens was created a few years before Joseph Banks became it’s unofficial superintendent (in around 1773) and then director. He had a pivotal role in building the collection: commissioning plant collectors to travel the world, all backed by George III. I must admit that my recent reading has led me to see George III in a new light: as an enthusiastic supporter of scientific enterprises, rather than a mad-man. George III and Banks also collaborated on a programme to introduce merino sheep from Spain, which had potentially huge commercial implications. Banks was seen as a loyal courtier.

Through his life it’s estimated that Banks wrote an average of 50 letters per week almost entirely in his own hand, although they were fantastically well organised during his life, on his death they were rather poorly treated and dispersed. Warren R. Dawson produced a calendar of the remaining correspondence. I’ve not found this resource online but a treatment like this Republic of Letters would be fantastic.

I suspect a comprehensive biography of Joseph Banks is exceedingly difficult to write; this one seemed to cover voyaging well but I felt was lacking in botany and his scientific activities at the Royal Society. Perhaps the answer is that a comprehensive biography is impossible, since he had interests and substantial impacts in so many areas. There was simply no end to his talents!

Footnote
In the style of a school project I have made a Google Map with some key locations in Joseph Banks’ life.