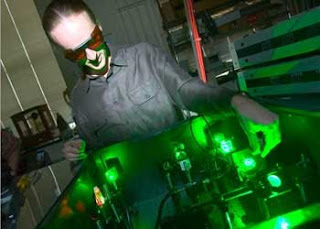 In a previous post I mentioned, in passing, surface quasi-elastic light scattering (SQELS). SQELS is a fancy way of measuring the surface tension of a liquid using light, it has some advantages over the alternative method: sticking something into the surface of the liquid and measuring the pull but it is technically challenging to do.

The basic idea of SQELS is this: if you take a liquid surface, even in the absence of breezes or shakes, it is perturbed by tiny waves the properties of which tell you about the surface properties of the liquid. These waves have frequencies of 10kHz, wavelengths of 0.1mm and amplitudes of only a few angstroms. They are driven by the thermal motion that means everything, on a small enough scale, is jiggling away incessantly. To measure these waves laser light is shone on the surface, most of the light is scattered elastically that’s to say it stays exactly the same colour. However, some of the light is scattered inelastically (or quasi-elastically since the effect is small) – it changes colour slightly, the power spectrum of the surface waves is imprinted onto the laser light in terms of shifts in its colour. So all we need to do is measure the power spectrum of the light reflected from the surface to find out about the surface properties of the liquid.

It turns out I don’t have any photos of the SQELS apparatus in all its glory, so I shall describe it in words. The whole thing is found on an 8 foot by 4 foot by 1 foot thick optical table. A fine, very solid table whose top surface is a sheet of brushed steel, pierced by a grid of threaded holes 25mm apart. The apparatus is in the form of a large U covering two long sides and one short side of the table. A laser is bolted at the start of the U; light heads from the laser along the table through a set of lenses, polarisers, a diffraction grating, then upwards through a periscope before being directed down onto the liquid in Langmuir trough. The Langmuir trough is protected by a cardboard box, decorated in the style of a Freisian cow with holes cut roughly in the sides to allow light in and out. Captured after reflection from the surface of the liquid, the laser light is directed back down to the table surface by a second periscope from where it passes back along the long side of the table into a photomultiplier tube – the detector.

The cardboard box is there to stop air currents disturbing the surface of the liquid, vibration is the enemy for this experiment because the liquid in the Langmuir trough picks up the slightest disturbance and wobbles around. Sitting on an optical table weighing a large fraction of a tonne isn’t enough – it needs to be on the ground floor too because buildings wobble and in this instance the Langmuir trough sat on an active anti-vibration table – a bit like noise cancellation headphones but the size of a small coffee table. You can manage without active anti-vibration if you’re willing to do your experiments in the dead of night.

The cardboard box is emblematic of a piece of research apparatus: much of it is constructed from pre-fabricated components, some of it is custom-made in the departmental workshop but then there are the finishing touches that depend on your ingenuity and black masking tape. I did have plans to get the cardboard box remade in perspex but the box was just the right size and if I wanted more holes in it I could easily cut them with a knife so it was never worth the effort. I seem to remember a bit of drainpipe being involved too. As an experimental scientist you get your eye tuned in to spot things just right to add to your apparatus.

The laser is a single mode solid-state laser producing light of 532nm wavelength – a brilliant green colour. Three things are important about lasers: firstly, they are fantastically bright; secondly, they produce light of a very pure colour – a single wavelength. Thirdly, lasers go “oooooooommmmmmmmm”, whilst conventional light-sources go “pip-pip—-pip-pip—pip”. Technically this is described as “coherence”, we’re using a laser in part because we want something to compare against and a conventional light-source isn’t going to work for this. If you’re measuring a small change, it’s very handy to have a “ruler” close at hand, and in this case the elastically scattered light is that ruler.

You’ll notice that I’ve not said anything about the results we obtained using the SQELS; truth be told, despite all the hours spent building the apparatus, doing the experiments and analysing the data the results we obtained told us little more than that which we could get by easier and simpler means that I described in my earlier post. I also had the sneaking suspicion that it would have helped if I knew more about optical engineering.

(I got distracted in the middle of this post, browsing through the Newport optical components catalogue site!) 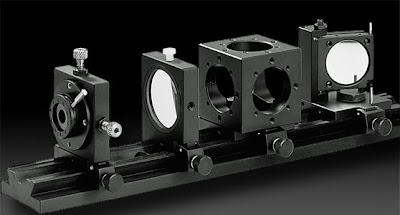