The naming of things 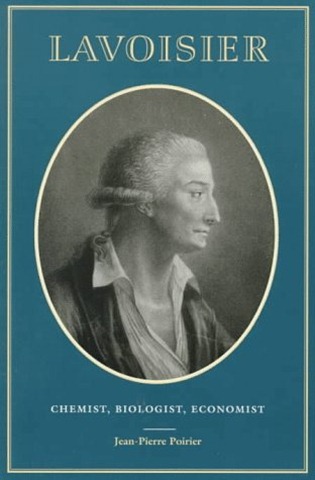 Recently I read Vivian Grey’s biography of Lavoisier. Although a fine book, it left me wanting more Lavoisier, so I turned to Jean-Pierre Poirier’s more substantial biography: “Lavoisier: Chemist, Biologist, Economist”. Related is my blog post on the French Académie des Sciences, of which Lavoisier was a long term member, and senior, member.

This is a much longer, denser book than that of Grey, with commonality of subject it’s unsurprising that the areas covered are similar. However, Poirier spends relatively more time discussing Lavoisier’s activities as a senior civil servant and as an economist.

The striking thing is the collection of roles that Lavoisier had: senior member of Ferme Générale (commissioned Paris wall), director of the Académie, director of the Gunpowder and Saltpeter Administration, owner and manager of his own (agricultural) farms. It’s difficult to imagine a modern equivalent, the governor of the Bank of England running a research lab? Or perhaps an MP with a minor ministerial post, running a business and a research lab? In practical terms he did experimental work for a few hours each morning and evening (6-9am, 7-10pm) and on Saturdays – having a number of assistants working with him.

Lavoisier was wealthy, inheriting $1.8million* from relatives as an 11 year old he joined the Ferme Générale with an initial downpayment of about $3million. However, this provided an income of something like $2.4-4.8 million a year. On a trip to Strasbourg as a 24 year old, he spent $20,000 on books – which you have to respect. As the collector of taxes levied on the majority but not the nobility or clergy, the Ferme Générale was one of the institutions in the firing line when the Revolution came. Wealthy financiers, such as Lavoisier, bought stakes in these private companies, provided exclusive rights by the King, and made enormous rates of return (15-20%), at the same time serving the Kings needs rather poorly.

As for his activities in chemistry, Poirier provides a a good background to the developments going on at the time. Beyond what I have read before, it’s clear that Lavoisier does not make any of the first discoveries of for example, oxygen, carbon dioxide or nitrogen, nor of the understanding that combustion results in weight gain. But what he does do is build a coherent theory that brings all of these things together and overthrows the phlogiston theory of combustion. With Guyton de Morveau he develops a new, systematic, way of naming chemicals which is still used today and, as a side effect, embeds his ideas about combustion. It’s from this work that the first list of elements is produced. Furthermore, Lavoisier sees the applications of the idea of oxidation in explaining “chemical combustion” as entirely appropriate for understanding “biological combustion” or respiration. In a sense he sets the scheme for biochemistry which does not come to life for nearly 100 years, for want of better experimental methodology.

It’s interesting that gases are arguably the most difficult materials to work with yet it is their study, in particular understanding the components of air, which leads to an understanding of elements, and the “new chemistry”. Perhaps this is because gases are their own abstraction, there is nothing to see only things to measure.

The book also gives a useful insight into the French Revolution for someone who would not read the history for its own sake. The heart of the Revolution was a taxation system that exempted the nobility and the clergy from paying anything, and a large state debt from supporting the American War of Independence. Spending appears to have been decided by the nobility, or even just the King, with little regard as to how the money was raised. At one point Paris considered an aqueduct to bring in fresh water to all its citizens, but then decided that rebuilding the opera house was more important! The Revolution was a rather more drawn out than I appreciated with Lavoisier at the heart of the ongoing transformation at the time of his execution during the Terror, only to be lauded once again a couple of years later as Robbespierre fell from power and was executed in his turn.

On economics: Lavoisier was one of the directors of the French Discount Bank, during the Revolution he was involved in plans for a constitutional monarchy and amongst the ideas he brought forward was for what would essentially be an “Office for National Statistics”. The aim being to collect data on production and so forth across the economy in support of economic policy. This fits in with the mineral survey work he carried at the very beginning of his career and also on his work in “experimental farming”. Economic policy at the time alternating between protectionism (no wheat exports) and free-markets (wheat exports allowed), with many arguing that agriculture was the only economically productive activity.

It’s tempting to see Lavoisier’s scientific and economic programmes being linked via the idea of accounting: in chemistry the counting of amounts of material into and out of a reaction and in economics counting the cash into and out of the economy.

Definitely a book I would recommend! It’s remarkable just how busy Lavoisier was in a range of areas, and the book also provides a handy insight into the French Revolution for those more interested in science. I wondering whether Benjamin Franklin should be my next target.

*These are equivalences to 1996 dollars, provided in the book, they should be treated with caution.