“Too much, too young”

Working my way through various bits of scientific history it becomes clear that what is going on outside the lab can have a profound impact on the protagonists. For the early years of the Royal Society the English Civil War and the Restoration had a big impact on the Fellows; the general feeling was “never again” and there was a search for stability and order. Later, in the 18th century, the American War of Independence and the subsequent wars arising from the French Revolution had an impact on The Lunar Men, impacting as it did on trade and their own radical politics. Lavoisier was to find the French Revolution terminal. In the 20th century, scientists were to play a large role in the Second World War; in codebreaking, radar and in building the atomic bomb. This followed a lesser role in the First World War, developing chemical weapons.

As someone whose formal education in history ended at the age of fourteen I thought I should get a feel for the wars going on around the people closer to my interests; this also seemed to be a good opportunity to play with whizzy Javascript timeline technology courtesy of Simile. It turns out the tricky bit is getting Javascript to run inside WordPress, I cheated a little by simply installing the Simile timeline plugin which fixed things in a way I don’t pretend to understand.

The timeline below is derived from a page in wikipedia entitled British Wars, I wanted to go back to the beginning of the 17th century so I supplemented that list with the linked “List of wars involving England”; Great Britain did not exist prior to the Acts of Union in 1707. You can slide the timeline backwards and forth by dragging it with the mouse.

Javascript timeline broken on upgrade to WordPress 3.5, you can see it here now.

I’ve colour coded the wars geographically as follows civil war: blue, Africa: brown, European:green, Americas:red, India:olive, SE Asia:black, New Zealand:purple and Middle East:orange, I have done this slightly erratically. During the 19th century we appear to have engaged in an awful lot of colonial conflicts around the world.

Developing this timeline I have experienced some of the shortcomings of the timeline presentation, I started off with the Cast of Characters in Lisa Jardine’s “Ingenious Pursuits”, entering their birth and death dates, but quickly found I had a rather ugly pile of people whose lives centred around 1680 with outliers before and after that time. Once I started on “British Wars” a second drawback becomes apparent: what is important and what isn’t? In a sense I gave up this decision to the compilers of the Wikipedia page, blindly adding all they had put in. This means the Cod Wars appears alongside the First World War implying some sort of equivalence. They also rate “The Troubles” in Northern Ireland as a war which I struggle to admit.

As a second exercise I tried working out how “important” a war was through numbers of military casualties, for this exercise the full list of British Wars is a bit long so again I left the deciding what was important to someone else, in this case a BBC History timeline, this finds a more manageable 10 major wars over the last 400 years or so. In fact it turns out that the Crimean and Boer Wars had relatively few military causalities, so I have omitted them. Below you can see the number of causalities for each war, expressed as a fraction of the population at that time. The casualty figures come from a combination of Wikipedia and Necrometrics, the population figures from the Historical Atlas. 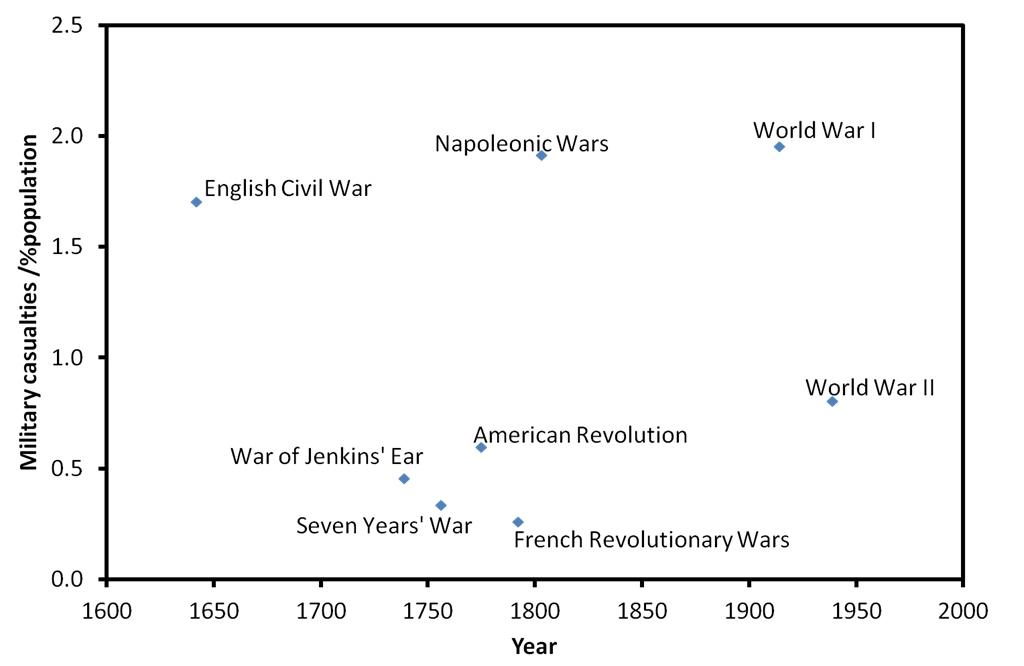 This plot lumps together a whole sequence of conflicts from the first plot into “Napoleonic Wars”. I’ve always known that World War I was known as the war to end all wars, that the casualty figures were horrific, but hadn’t appreciated that the Napoleonic Wars were similar in scale compared to the size of the population. Similarly the English Civil War scores highly for casualties but even so is under-represented in this plot since I decided to use the military casualty figures rather than total deaths relating to the war i.e. including civilians and those who died of disease or famine.

This is a rather parochial view but it has got the sequence of wars Britain has undertaken into some sort of chronology for me.