The 7th October is Ada Lovelace Day, Finding Ada has encouraged me to write a timely post about women in science, technology engineering or mathematics (STEM), specifically it says:

Create content about a woman in STEM that you admire

Ada Lovelace lived 1815-1852, and is sometimes credited as the world’s first programmer for the notes she wrote on Charles Babbages’ analytical engine – a mechanical computing device which was never constructed. She is commemorated in the Ada programming language, developed for the US Department of Defence with reliability in mind.

To be honest I’ve never found scientific inspiration in long dead “heroic” individual scientists. Lately I’ve been reading rather more of the history of science; institutionally the position of women in science until at least the middle of the 20th century was pretty dire: the Royal Society, proud of its internationalism, religious and political intolerance did not admit its first female members until 1945. The first women were admitted to study at Oxford and Cambridge universities in the later half of the 19th century and they did not gain equal formal status with men until the middle of the 20th century. It’s always somewhat bemusing to hear criticisms of other country’s poor record on female education when we weren’t doing so well within living memory. 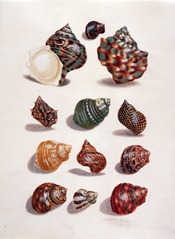 This is not to say there are no women in the history of science, just that they fitted into the social accepted roles of their times. For example, Marie-Anne Pierette Paulze, the wife of Antoine Lavoisier was clearly heavily and expertly involved in the conduct of his scientific experiments in the late 18th century. William’s sister, Caroline Herschel spent many evenings observing the heavens with him (and by herself), discovering several comets and being formally recognised for her work in her later years with medals from the Royal Astronomical Society (1828) and the king of Prussia (1846). In the late 17th century naturalist and artist Maria Sybilla Merian published several books based around her observations, particularly on the metamorphosis of butterflies, and drawings of flowers and insects both in Europe. Later in her life she spent two years in Surinam where she made a study of South American flora and fauna. I’m rather impressed with Merian, travelling and living in South America in the 17th century was pretty challenging stuff regardless of gender.

Sadly I had not got into the habit of posting on my book reading when I read a biography of Marie Curie: with Nobel Prizes in both physics and chemistry, she is outstanding even ignoring the challenges of doing science as a woman at the beginning of the 20th century.

Practically speaking I have been taught science along with many other subjects by women; Ms Pitman who taught me physics (and was sarcastic about the PE teachers), and Mrs Haas who taught me biology. This is not to ignore those whose names I can’t recall, my recall of anything dating back 25 years or so is vague these days! Looking back it seems women made their first impact in science in communication and teaching, see for example Mary Somerville and Émilie du Châtelet.

For me my education, my wonder, was as much to do with my family as my teachers.

Ultimately the woman in STEM who has most influenced me is my mum. She learnt to program on an Elliot 503 in the early sixties: 400 square feet of computer with substantially less processor power than the most lowly of today’s devices. She was later to work for the UK Atomic Energy Authority where she worked on PACE analogue computers, and mechanical calculators. All this is somewhat vague on my part because it is only now I have started to pay an interest in the day to day work she did before I was born.

Forty-one years ago my mum gave up her career when she became pregnant with me and even a few years later, when my brother and I had both started at school, a local employer refused to give her a job application form on the grounds that she was a mother.

As The Inelegant Gardener and I await our first child things are very different.