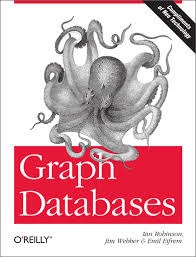 Regular readers will know I am on a bit of a graph binge at the moment. In computer science and mathematics graphs are collections of nodes joined by edges, they have all sorts of applications including the study of social networks and route finding. Having covered graph theory and visualisation, I now move on to graph databases. I started on this path with Seven Databases in Seven Weeks which introduces the Neo4j graph database.

And so to Graph Databases by Ian Robinson, Jim Webber and Emil Eifrem which, despite its general title, is really a book about Neo4j. This is no big deal since Neo4j is the leading open source graph database.

This is not just random reading, we’re working on an EU project, NewsReader, which makes significant use of RDF – a type of graph-shaped data. We’re also working on a project for a customer which involves traversing a hierarchy of several thousand nodes. This leads to some rather convoluted joining operations when done on a SQL database, a graph database might be better suited to the problem.

The book starts with some definitions, identifying the types of graph database (property graph, hypergraph, RDF). Neo4j uses property graphs where nodes and edges are distinct items and each can hold properties. In contrast RDF graphs are expressed as triples which encompass both edges and nodes. In hypergraphs multiple edges can be expressed as a single item. A second set of definitions are regarding the types of graph processing system: graph databases and graph analytical engines. Neo4j is designed to provide good performance for database-like queries, acting as a backing store for a web application rather than an analytical engine to carry out offline calculations. There’s also an Appendix comparing NoSQL databases which feels like it should be part of the introduction.

A key feature of native graph databases, such as Neo4j, is “index-free adjacency”. The authors don’t seem to define this well early in the book but later on whilst discussing the internals of Neo4j it is all made clear: nodes and edges are stored as fixed length records with references to a list of nodes to which they are connected. This means its very fast to visit a node, and then iterate over all of its attached neighbours. The alternative index-based lookups may involve scanning a whole table to find all links to a particular node. It is in the area of traversing networks that Neo4j shines in performance terms compared to SQL.

Schema are an important concept in SQL databases, they are used to enforce constraints on a database i.e. “this thing must be a string” or “this thing must be in this set”. Neo4j describes itself as “schema optional”, the schema functionality seems relatively recently introduced and is not discussed in this book although it is alluded to. As someone with a small background in SQL the absence of schema in NoSQL databases is always the cause of some anxiety and distress.

A chapter on data modelling and the Cypher query language feels like the heart of the book. People say that Neo4j is “whiteboard friendly” in that if you can draw a relationship structure on a whiteboard then you can implement it in Neo4j without going through the rigmarole of making some normalised schema that doesn’t look like what you’ve drawn. This seems fair up to a point, your whiteboard scribbles do tend to be guided to a degree by what your target system is, and you can go wrong with your data model going from whiteboard to data model, even in Neo4j.

I imagine it is no accident that more recent query languages like Cypher and SPARQL look a bit like SQL. Although that said, Cypher relies on ASCII art to MATCH nodes wrapped in round brackets and edges (relationships) wrapped in square brackets with arrows –>  indicating the direction of relationships:

Graph databases goes on to describe implementing an application using Neo4j. The example code in the book is in Java but there appears, in py2neo, to be a relatively mature Python client. The situation here seems to be in flux since searching the web brings up references to an older python-embedded library which is now deprecated. The book pre-dates Neo4j 2.0 which introduced some significant changes.

Overall I have mixed feelings about this book: the introduction and overview sections are good, as is the part on Neo4j internals. It’s a rather slim volume, feels a bit disjointed and is not up to date with Ne04j 2.0 which has significant new functionality.  Perhaps this is not the arena for a dead-tree publication – the Neo4j website has a comprehensive set of reference and tutorial material, and if you are happy with a purely electronic version than you can get Graph Databases for free (here).