A question for Theresa May

Book review: The Company by John Micklethwait and Adrian Wooldridge 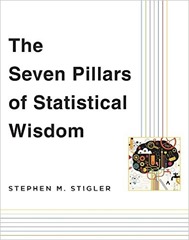 The Seven Pillars of Statistical Wisdom by Stephen M. Stigler is a brief history of what the author describes as the key pillars of statistics. This is his own selection rather than some consensus of statistical opinion. That said, to my relatively untrained eye the quoted pillars are reasonable. They are as follows:

1 – Aggregation. The use of the arithmetic average or mean is not self-evidently a good thing. It was during the 17th century, when people were taking magnetic measurements in order to navigate, that ideas around the mean started to take hold. Before this time it was not obvious which value one should take when discussing a set of measurement purportedly measuring the same thing. One might take the mid-point of the range of values, or apply some subjective process based on your personal knowledge of the measurer. During the 17th century researchers came to the conclusion that the arithmetic mean was best.

2 – Information. Once you’ve discovered the mean, how good is it as a measure of the underlying phenomena as you increase the size of the aggregation? It seems obvious that the measure improves as the number of trials increases but how quickly? The non-trivial answer to this question is that it scales as the square root of N, the number of measurements. Sadly this means if you double the number of measurements you make, you only improve you confidence in the mean by a factor of a little over 1.4 (that being the square root of 2) . Mixed in here are ideas about the standard deviation, a now routine formulation quoted with the mean. It was originally introduced by De Moivre in 1738, for the binomial distribution, but then generalised by Laplace in 1810 as the Central Limit Theorem.

3 – Likelihood. This relates to estimating confidence that an observed difference is real, and not due to chance. The earliest work, by John Arbuthnot, related to observed sex ratios in births recorded in England and whether they could be observed by chance rather than through a “real” difference in the number of boys and girls born.

4 – Intercomparison. Frequently we wish to compare sets of measurements to see if one thing is significantly different from another. The Student t-test is an example of such a thing. Named for William Gosset, who took a sabbatical from his job at Guiness to work in Karl Pearson’s lab at UCL. As an employee Guiness did not want Gosset’s name to appear on a scientific paper (thus revealing their interest), so he wrote under the rather unimaginative pseudonym “Student”.

5 – Regression. The chapter starts with Charles Darwin, and his disregard for higher mathematics. He professed a faith in measurement and “The Rule of Three”. This is the algebraic identity a/b = c/d which states that if you know any 3 of a, b, c and d you can calculate the 4th. This is true in a perfect world, but in practice we would acquire multiple sets of our three selected values and use regression to obtain a “best fit” for the fourth value. Also in this chapter is Galton’s work on regression to the mean in particularly how parents with extreme heights had children who were on average closer to the mean height. This is highly relevant to the study of evolution and the inheritance of characteristics.

6 – Design. The penultimate pillar is design. In the statistical sense this means the design of an experiment in terms of the numbers of trials, and the organisation of the trials. This starts with a discussion of calculating odds for the French lottery (founded in 1757) and providing up to 4% of the French budget in 1811. It then moves on to RA Fisher’s work at the Rothamsted Research Centre on randomisation in agricultural trials. My experience of experimental design, is that statisticians always want you to do more trials than you can afford, or have time for!

7 – Residual. Plotting the residual left when you have made your best model and taken it from your data is a time honoured technique. Systematic patterns in the residuals can indicate your modern is wrong, that there are new as yet undiscovered phenomena to be discovered. I was impressed to discover in this chapter that Frank Weldon cast 12 dice some  315,672 times to try to determine if they were biased. Data collection can be an obsessive activity. This story from the early 20th century is not in common.

Seven Pillars is oddly pitched, it is rather technical for a general science audience. It is an entertainment, rather than a technical text. The individual chapters would have fitted quite neatly into The Values of Precision, which I have reviewed previously.