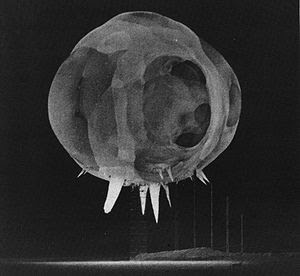 I thought in this post I would touch on science and morality by means of the Manhattan Project.

The picture at the head of the page is of the very early stages of an atomic bomb going off. The roughly spherical fireball is approximately 20 metres across at this point. It was taken using a “rapatronic” camera, invented by Harold Egerton for just this purpose.  The exposure time for this camera can be as short as 1/500,000th of a second (2 microseconds). Cameras were fired sequentially at periods less than 1/1000th of a second (1 millisecond) after detonation, to produce a sequence of images of which this is just one. The camera is triggered by a photocell, which picks up the x-ray flash as the bomb goes off, and a delay circuit. The shutter contains no moving parts, it is a “Kerr cell” placed between two polarizers arranged such that they let through no light. When a current flows through the Kerr cell the polarisation of light is rotated and so can make it through both polarizers – no current and no light gets through. This is all done electronically so can happen really fast.

The bomb was detonated on a gantry tower supported by guy wires, the bright spikes beneath the round explosion are known as “rope tricks“, they are where the metal guy wires have been vapourized by the light from the initial detonation. If you cover the guy wires in aluminium foil the rope tricks disappear because the light is reflected, paint them black and the spikes appear larger because more light is absorbed. The distorted shape of the fireball is a relic of irregularities in the bomb casing, and the small shed at the top of the gantry tower in which the bomb is placed.

To me the story of the making of the atomic bomb is fascinating and exciting. In the period of a few years from 1939-1945 methods were found to extract scarce isotopes of uranium in kilogram quantities; manufacture plutonium; the fundamental radioactive properties of the substance were discovered; calculations were done to work exactly how much uranium you needed for a bang, how quickly you had to get it together and the whole thing converted into a working device that could be carried in an aeroplane. And they did a lot of this work twice, since the bombs dropped on Hiroshima and Nagasaki are quite different in design.The story about the rapatronic camera shutter is just a relatively little-known footnote to the whole endeavour.

The Manhattan Project was served by a considerable number of scientists, including twenty Nobel Prize winners, amongst a staff of around 130,000. These scientists represent a large fraction of the most renowned scientists of the period. I think I can imagine how I would have felt to working on the bomb, I would have been keen to be part of the war effort, I’d have been thrilled by the intellectual firepower of my colleagues, I’d have been excited by the technical challenge of actually making a real thing.

And then there was the Trinity test firing, I think at this point I would have become really aware of the enormity of what I had been involved in. J. Robert Oppenheimer, who directed the Los Alamos site where the bomb was constructed, later said he thought of this line from the Bhagavad Gita:

Now I am become Death, the destroyer of worlds

Which always struck me as being a bit pretentious, but maybe that’s a result of my ignorance. Whilst Kenneth Bainbridge, the director for the Trinity test, is reported to have said:

Now we are all sons of bitches

Which strikes me as a rather more plausible response. I have to say, with a little embarrassment, that I would have been thrilled by the size of the bang I had made. 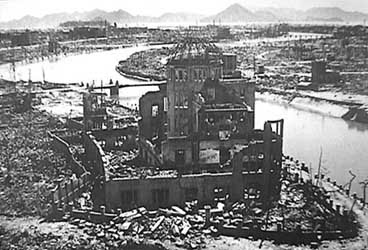 After the war many scientists returned to normal life. Some didn’t, Edward Teller enthusiastically promoted the thermonuclear bombs for just about any application imaginable. Joseph Rotblat left the Manhattan Project before the bomb was dropped, and whilst continuing scientific work, he helped found, and run, the Pugwash Organisation and spent the rest of his life campaigning for peaceful conflict resolution.

Do scientists have a special moral responsibility? They certainly took the initiative in terms of highlighting the potential of an atomic bomb before the war, but actually making the bomb and deploying it took far more than just a few scientists. As to the morality of killing people in war, then I don’t think scientists can claim any special moral insight here.

Finishing in this way seems a bit trite, and it feels in some ways an abdication of responsibility. I think the point I’m trying to make is that scientists are just people, and we bear the same moral responsibilities as anyone else. The only difference is that scientists have the potential to open up new moral questions: “Is it more wrong to kill 100,000 people with one bomb, as opposed to many bombs?”. Maybe we have the ability to close old moral questions through evidence.