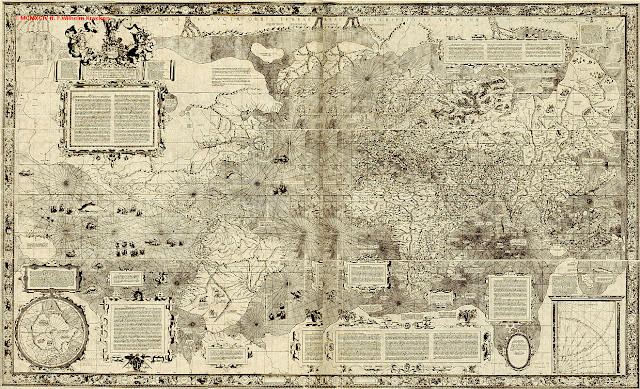 Once again I have been reading, this time “The World of Gerard Mercator” by Andrew Taylor. As before this blog post could be viewed as a review or, alternatively, as some notes to remind of what I have read. Overall I enjoyed the book, it provides the right amount of background information and doesn’t bang on interminably about minutiae. I would have liked to have seen some better illustrations, but I suspect good illustrations of maps of this period are hard to come by and a full description of Mercator’s projection was probably not appropriate.

The book starts off with some scene setting: at the beginning of the 16th century the Catholic church were still keen on Ptolemy’s interpretation of world geography in fact to defy this interpretation was a heresy and could be severely punished. Ptolemy had put down his thoughts in Geographia produced around 150AD, which combined a discussion of the methods of cartography with a map of the known world. As a precedent Ptolemy’s work was excellent, however by the time of the 16th century it was beginning to show it’s antiquity. Geographical data, in Ptolemy’s time, from beyond the Roman Empire was a little fanciful, and since the known world was a relatively small fraction of the surface of the globe the problems associated with showing the surface of a 3D object on a 2D map were not pressing. Ptolemy was well aware of the spherical nature of the world, Eratothenes had calculated the size of the earth in around 240BC, he stated that a globe would be the best way of displaying a map of the world. However, a globe large enough to display the whole world at sufficient detail would have to be very large, and thus difficult to construct and transport.

Truly global expeditions were starting to occur in the years before Mercator’s birth: Columbus had “discovered”  the West Indies in 1492, John Cabot made landfall on the North American landmass in 1497. Bartolomeu Dias had sailed around the Southern tip of Africa in 1488, Vasco da Gama had continued on to India in 1497, around the Cape of Good Hope. The state of the art in geography could be found in Waldseemüller’s map of 1507, showing a recognisable view of most of our world. Magellan‘s expedition would make the first circumnavigation of the globe in the early years of Mercator’s life (1519-1522).

Mercator was born in Rupelmonde in Flanders on 5 March 1512, he died 2 December 1594 in Duisburg in what is now Germany at the age of 82. This was a pretty turbulent time in the Netherlands, the country was ruled by Charles V (of Spain) and there appears to have been significant repression of the somewhat rebellious and potentially Protestant population. Mercator was imprisoned for heresy in Rupelmonde in February 1543, remaining in custody until September, many in similar circumstances were executed, however Mercator seems to have avoided this by a combination of moderately powerful friends and a lack of any evidence of heresy.

Mercator’s skill was in the collation and interpretation of geographical data from a wide range of sources including his own surveys. In addition he was clearly a very skilled craftsman in the preparation of copperplate engravings. He was commercially successful, manufacturing his globe throughout his life, as well as many maps and scientific instruments for cartographers. He also had a clear insight into the power of patronage.

His early work was in the preparation of maps of the Holy Land (in 1537) and Europe (in 1554), along with a globe produced in 1541. The globe seems to be popular amongst reproducers of antiquities, you can see details of it on the Harvard Map Collection Website.

Mercator is best known for his “projection”, in this context a projection is a way of converting the world – which is found on the surface of a 3D sphere into a flat, 2D map. Mercator introduced his eponymous projection for his 1569 map of the world, illustrated at the top of this post. The particular feature of this projection is that if you follow a fixed compass bearing you find yourself following a straight line on the Mercator projected map. This is good news for navigators! The price you pay for this property is that, although all regions are in the correct places relative to each other, their areas are distorted so those regions near the poles appear much larger than those near the equator. Mercator seems to have made little of this discovery, nor described the method by which the projection is constructed – this was done some time later, in 1599, by Edward Wright. Prior to maps following Mercator’s projection navigation was a bit hit and miss, basically you headed up to a convenient latitude and then followed it back to your destination – an inefficient way to plan your course. If you’re interested in the maths behind the projection see here.

In terms of it’s content the 1569 map shows Europe, Africa and a large fraction of Asia much as we would see it today, certainly in terms of outline. The Eastern coast of North and South America is fairly recognisable. The map fails in it’s representation of the West coast of America – although to give credit where it is due, it at least has a west coast. The landmasses indicated at the northern and southern poles are close to pure fantasy. The Southern continent had been proposed by Ptolemy as a counterbalance to the known Northern continents – with no supporting evidence. Exploration of the far North was starting to occur during Mercator’s life, with expedition such as that of Frobisher.

Mercator is also responsible for the word “atlas” to describe a book containing a set of maps, in this instance he coined the term to describe the volumes of maps he was preparing towards the end of his life, the last of which was published published posthumously by his son, Rumold, in 1595.

Following my efforts on Joseph Banks, I thought I’d make a map of significant locations in Mercator’s life. You can find them here in Google Maps, zoom out and you will see the world in Mercator projection – a legacy from a man that lived nearly 500 years ago.