Go back to your constituencies and prepare for government! 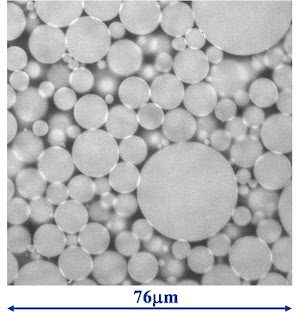 Some time ago I wrote a post on confocal microscopy – a way of probing 3D structure at high spatial resolution. This post is about using confocal microscope to understand mayonnaise (and a bunch of other things)

As young scientists we are introduced to the ideas of solids, liquids and gases very early on. We make these distinctions, amongst other things, to understand their mechanical properties, to answer questions such as: How thick do I have to make the legs of my chair to support my weight? How fast will liquid run out of a bucket? How high will my balloon fly?

But what is mayonnaise? It’s very soft, and can be made to flow but it’s not a proper liquid – you can make a pile of mayonnaise. How do we describe grain in a silo, or an avalanche? In some senses they have properties similar to a liquid: they flow – yet they form heaps which is something a solid does. What about foams –  a pile of shaving foam looks pretty similar to mayonnaise? Starch paste is an even weirder example, it acts like a liquid if you treat it gently but a solid if you try anything quick. (This is known as shear thickening). These mixed systems are known as colloids.

The programme for understanding solids, liquids, gases and these odd systems is to understand the interactions between the “fundamental” particles in the system. For our early courses in solids, liquids, and gases this means understanding what the atoms (or molecules) are doing – how many of them are there in a unit volume, how are they ordered, how do they move and how they interact. Typically there are many “fundamental” particles in whatever you’re looking at so rather than trying to work out in detail what all of them are up to you resort to “statistical mechanics”: finding the right statistical properties of your collection of particles to inform you of their large scale behaviour.

The distinguishing feature of all of our new systems (mayonnaise, grain piles, avalanches, foams, starch paste) is that they are made from lumps of one phase (gas, liquid, solid) in another. Avalanches and grain piles are solid particles in a gas; mayonnaise is an emulsion: liquid droplets (oil) inside another liquid (water); foams are air inside a liquid and starch paste is a solid inside a liquid. These systems are more difficult to analyse than our traditional gases, solids and liquids: firstly their component parts aren’t all simple and aren’t all the same. Particles most likely have different sizes and shapes. Atoms and molecules are all the same size and all the same shape. Secondly, they’re athermal – ambient temperatures don’t jiggle all their bits around to make nice averages.

Confocal microscopy looked like an interesting way to answer some of these important questions about the structures to be found in these complex systems. Mayonnaise turns out not to be a good model system to work with – you can’t see through it. However, you can make an emulsion of different combinations of oil and water, and if you’re cunning you can make an emulsion with over 50% of droplets by volume which is still transparent. Using even more cunning you can make the distribution of droplet sizes relatively small.

Having spent a fair bit of time getting the emulsions transparent with reasonable droplet size distributions, my student, Jasna, came in with some pictures of an emulsion from the confocal microscope: where the oil droplets touched each other the image was brighter, you can see this in the image at the top of this post. This was rather unexpected, and useful. The thing about squishy balls, is that the amount by which they are squished tells you something about how hard they are being squeezed. The size of the little patches tells you how much force each droplet is feeling. So all we have to do to find the force network in an emulsions is measure the size of the bright patches between them.

In the end our work measured the forces between droplets in a compressed emulsion and we found that these measurements agreed with a theory and some computer simulations. Criticisms of the work were that the relationship between luminous patch size and force was more complicated than we had assumed, and that the force distribution was all very well but the interesting thing was the arrangement of those forces. These criticisms are fair enough. Must have been pretty good though, because someone wrote a paper for Science claiming to have done it first, whilst citing our paper (they had to publish a correction)!

Footnotes
This work can be found in this paper:

Jasna Brujic was the PhD student who did the experimental work, Sir Sam Edwards is a theoretician who works on granular materials, Dmitri Grinev worked with Sir Sam on the theory, I supervised Jasna, Djordje Brujic is Jasna’s dad and wrote the image analysis code and Hernan Makse is a computer simulator of granular materials.