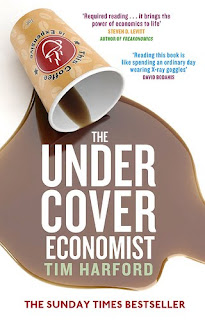 Today I’m off visiting the economists, this is a bit of a different sort of visit since I haven’t found that many to follow on twitter, instead I must rely on their writings.

I’ve been reading Tim Harford’s “The Undercover Economist” which is the main topic of this post, in the past I’ve also read “Freakonomics” by Levitt and Dubner. Harford’s book is more about classical economics whilst “Freakonomics” is more about the application of quantitative methods to the analysis of social data. This is happy territory for a physicist such as myself: there are numbers, there are graphs and there are mathematical models.

David Ricardo pops up a few times, it would seem fair to compare him to the Newton of economics, he lived 1772-1823.

I learnt a whole bunch of things from Tim Harford’s book, including what shops are up to: working out how to persuade everyone to pay as much as they are willing to pay, by means such as “Value” and “Finest” ranges whose price differences don’t reflect their cost differences, similar pricing regimes are found in fancy coffee. In a way income tax bypasses this, it replaces willingness to pay with ability to pay – I’m sure shops would love to be able to do this! Scarcity power allows a company to change more for its goods or services, and a company’s profits are indication that this might be happening.

Another important concept is market “efficiency”: perfect efficiency is achieved when no-one can be made better off without someone else losing out, this is not the same as fairness. In theory a properly operating market should be efficient but not necessarily fair. Externalities are the things outside the market to which a monetary value needs to be attached in order for them to be included in the efficiency calculation, this includes things like pollution and congestion in the case of traffic. This sounds rather open-ended since I imagine externality costing can be extremely disputed.

There’s an interesting section on inside / asymmetric information, and how this prevents markets from operating properly. The two examples cited are second-hand car sales and health insurance, in the first case the seller knows the quality of the car he his selling whilst the buyer struggles to get this information. Under these circumstances the market struggles to operate efficiently because the buyer doesn’t know whether he is buying a ‘peach’ (a good car) or a ‘lemon’ (a bad car), this reduces the amount he is willing to pay – the seller struggles to find a mechanism to transmit trusted quality information to the buyer. Work on information asymmetry won a Nobel Prize for Economics for George Akerlof, Michael Spence, and Joseph Stiglitz in 2001.

In the second case, health insurance, the buyer purportedly knows the risk they present whilst the seller doesn’t, this doesn’t quite ring true to me, it seems the observed behaviour in the US private healthcare system matches this model though. In a private insurance system the people who are well (and are likely to remain well) will not buy insurance, whilst those that believe themselves to be ill, or at serious risk of being ill will be offered expensive insurance because there is not a large population of healthy buyers to support them. Harford recommends the Singapore model for health care, which has compulsory saving for health care costs, price controls and universal insurance for very high payouts. This gives the consumer some interest in making most efficient use of the money they have available for health care.

You might recall the recent auctions of radio spectrum for mobile phone and other applications, this turns out to be a fraught process for the organiser – in the US and New Zealand this process went poorly with the government receiving few bids and less cash then they expected. In the UK the process went very well for the government, essentially through a well designed auction system. The theoretical basis for such auctions is in game theory, with John von Neumann and John Nash important players in the field (both recognised as outstanding mathematicians).

Tim Harford did wind me up a bit in this book, repeatedly referring to the market as “the world of truth”, and taxes as “lies”. This is a straightforward bit of framing: that’s to say the language used means anyone arguing against him is automatically in the “arguing against the truth” camp irrespective of the validity of the arguments. The formulation that taxes represent information loss is rather more interesting and he seems to stick with this more often than not. In this instance I feel the “world of truth” is ever so slightly tongue in cheek, but in the real world free-markets are treated very much as a holy “world of truth” by some political factions with little regard to the downsides: such as a complete ignorance of fairness, the problems of inside information and the correct costing of externalities.

A not inconsiderable number of physicists end up doing something in finance or economics: As Tom Lehrer says in the preamble to “In old Mexico”: “He soon became a specialist, specializing in diseases of the rich”. It turns out you get paid more if the numbers you’re fiddling with represent money, rather than the momentum of an atom. Looking at these descriptions of economic models, I can’t help thinking of toy physics models which assume no friction, and are at equilibrium. These things are very useful when building understanding, but for practical applications they are inadequate. Presumably more sophisticated economic models take this things into account. From a more physical point of view, it doesn’t seem unreasonable to model economics through concepts such as conservation (of cash) and equilibrium, but physics doesn’t have to concern itself with self-awareness – i.e. physical systems can’t act wilfully once given knowledge of a model of their behaviour. I guess this is where game theory comes in.

The interesting question is whether I should see economics as a science, like physics, which is used by politicians for their own ends or whether I should see them as being rather more on the inside. Economics as a whole seems to be tied up with political philosophy. Observing economists in the media there seem to be much wider range of what is considered possibly correct than you observe in scientific discussion.