I was up for Evan Harris 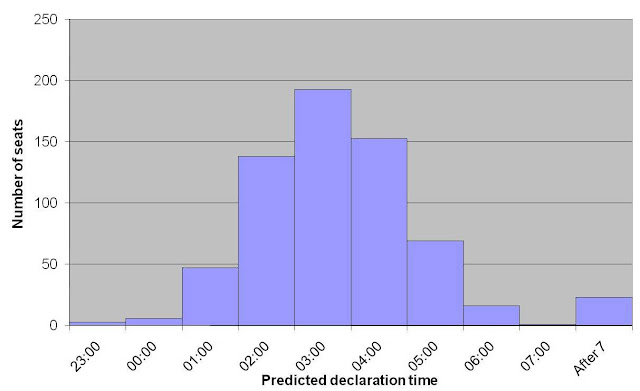 I’m planning on staying up late tonight, watching the results of the general election come in, this is an occasion for a graph. The chaps at tweetminster have uploaded a list of predicted declaration times here. I’ve rearranged the data a bit to plot it, the height of each bar tells you the number of constituencies declaring during the hour starting at the time indicated at the bottom of the bar. As you can see, things don’t really get going until about 2am. Key times for me are the declaration in my own constituency, City of Chester, at 3am and Dr Evan Harris’ Oxford West and Abingdon at 2:30am. Batley & Spen declares at around 5am hence the title of this blog post.

This has been the most exciting election campaign, and election night, in quite sometime. I spent the 1997 election at a friends house in Darlington, I remember stumbling out into the early morning with “Things can only get better” ringing in my ears. For a few years that seemed to be the case. 1992 was interesting in that we all thought John Major was going to lose, and then he won to the surprise of everyone (including John Major). 2001 and 2005 were rather dull.

As a seasoned Liberal Democrat I’m used to my party getting pretty good percentage poll scores overall and winning pitiably few seats, so to the newcomers out there – welcome to my world! I can only hope that this time things will be different.