May you live in interesting times…

I was up for Evan Harris 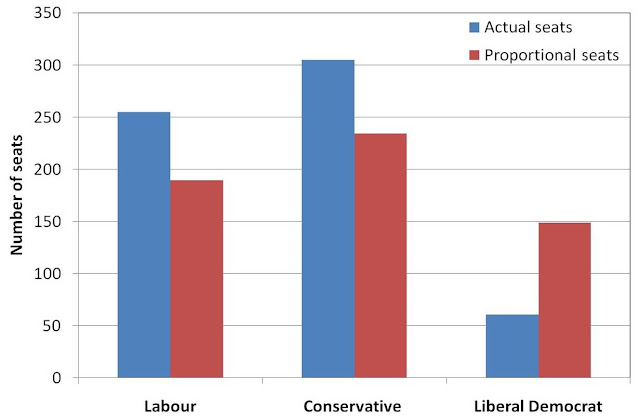 When Liberal Democrats went into the polling stations yesterday they were given a single polling card, their Labour and Conservative comrades had three. Look them in the eye, ask them:

What is special about you but not about me?

Explain to me how this is fair.

Explain to me how this is democracy.

To put it another way, every Labour or Conservative seat requires about 33,000 votes to win, a Liberal Democrat one requires 100,000 votes. We are the Great Ignored.

We have come to accept this inequity, it’s happened in every election since the early 80’s. As a country we just accept it as part of the way things are. It’s the defining feeling of being a Liberal Democrat, seeing the overall share of our vote creep up election by election and receiving the same feeble, disproportionate harvest in seats. The sinking feeling in the middle of the night that, no, of course there has been no breakthrough. It’s not because we perform poorly, it is because we have one polling card each, the others have three.

In 1997 the defining moment was Michael Portillo losing his seat to Stephen Twigg. My defining moment for this election was seeing Evan Harris lose his Oxford West and Abingdon seat. “I was up for Evan Harris”, I had a tear in my eye.

Footnote
*This is based on the exit poll (see entry at 23:11), which looks consistent with the results of the actual election as of 10:30am May 7th which are Conservative 291, Labour 247, Liberal Democrat 51 616 of 650 seats declared. Under pure proportionality UKIP would receive 20 seats, the BNP 12.