Book review: Lives of the Engineers by Samuel Smiles

This blog post seeks to answer the question: what economic growth rate does the UK need to sustain in order to reduce the deficit to zero?

This seems like a relevant question at the moment, and I’ve not seen a straightforward calculation of the answer – so I thought I’d give it a go myself. The idea being that even if the end result is not particularly informative the thinking behind getting the end result is useful.

The key parameter of interest here is the gross domestic product (GDP): the amount of goods and services produced in a year in the UK; it’s a measure of how wealthy we are as a nation, how it increases with time is a measure of economic growth. Also important are the deficit (how much the government’s annual spending exceeds its income) and debt (how much the government is borrowing).

Inflation means that the GDP can appear to grow each year with no increase in real economic activity, therefore I decided to use “inflation adjusted” GDP figures. I also preferred to use annual GDP figures rather than quarterly ones.

To model this I took a starting point of a known GDP, debt, deficit and government spend which I then propagated forwards in time: I made the GDP grow by a fixed percentage each year, and assumed that government spending would be flat (I’m using GDP adjusted for inflation so I think this is reasonable). Assuming that the total tax take is a fixed proportion of GDP I can calculate the deficit and hence increasing debt in each year, I add the debt servicing cost to the government spending in each. Since I’m doing everything else in the absence of inflation I’ve used a debt servicing rate of 2% rather than the 5% implied by a £43bn debt interest cost in 2010 – this makes my numbers a bit inconsistent.

I’ve put the calculation in a spreadsheet here.

Given this model my estimate is that the UK would need to sustain GDP growth of 4.8% per year until 2020 in order to reduce the deficit to 0%. This 4.8% GDP growth brings in approximately an additional £30bn in taxes for each year for which the growth is 4.8%. During this time the debt would rise to nearly 80% of GDP and so the cost of servicing the debt will double. These numbers seem plausible and fit with other numbers I’ve heard knocking around.

To get a feel for how GDP has varied in the past, this is the data for inflation adjusted annual GDP growth in the UK since 1950: 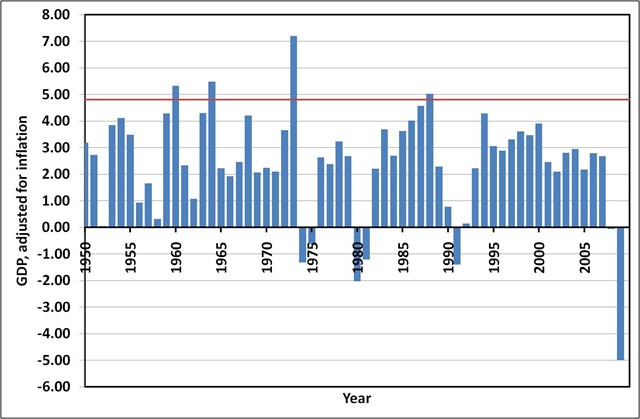 The red line shows the “target” 4.8% GDP growth, and the blue bars the actual growth in the economic, adjusted for inflation. The data comes from here. What’s notable is that GDP growth has rarely hit our target and what’s worse, over the last 40 years there have been four recessions (where GDP growth is negative), so the likelihood must be that another recession before or around 2020 is to be expected.

In real-life we are actually using a combination of GDP, government spending cuts and tax increases to bring down the deficit. These calculations indicate 0.5% GDP growth is approximately £7bn per year which is equivalent to a couple of pence on basic rate (see here) or about 1% of government spending (see here).

Doing this calculation is revealing because it highlights why there is an emphasis on cuts in government spending as a means of reducing the deficit. This had been a bit of a mystery to me with the figure of 80:20 cuts to taxes ratio being widely quoted as some sort of optimum, although there is some indication of other countries working with a ratio closer to 50:50. The thing is that when you cut your spending, you are in control. You can set a target for reduction and have a fair degree of confidence you can hit that target and show you have hit that target relatively quickly and easily. On the contrary relying on growth in GDP, or taxes, is a rather more unpredictable exercise: taxes because the amount of tax raised depends on the GDP.

The Office for Budget Responsibility (OBR) published uncertainty bounds for it’s future predictions of GDP in their pre-budget report last year (see p10 and Annex A in this report), their central forecast is for growth of 2.5% but by 2014 (i.e. in only 4 years) they estimated only a 30% chance that it lay between 1.5% and 3.5% actually they only claim a 40% chance of being in that range for this year (2011).

At the risk of being nearly topical, GDP is reported to have shrunk by 0.5% in the last quarter of last year, 2010. This is largely irrelevant to this post, although forecasts for GDP were growth of ~0.5% which supports the idea that GDP is not readily predictable. It’s worth noting that the ONS will revise this figure at monthly intervals until they get all the data in – the current estimate is based on 40% of the data being available.

Given this abysmal ability to predict GDP I suspect that there is little governments can do to influence the growth in GDP. It would be interesting to estimate the influence government policy has relative to prevailing global economic conditions, and what timelags there might be between policy changes and growth.

I think these calculations are illustrative rather than definitive, and what I’d really like is for someone to point to some better calculations!