This blog post attempts to answer the economic question: What country is the United Kingdom like economically?

The question arises from discussions of deficit (how much the government’s annual spending exceeds its income) and debt (how much the government is borrowing). To use a digging analogy: debt is a hole, deficit is how fast you are deepening the hole. We can get a feel for how countries compare in this sense by plotting them as a function of their deficits and debts on a graph. I’ve done this for the countries of the OECD (data here). The horizontal axis tells you  the deficit, whilst the vertical axis is the debt. These values are plotted as a percentage of the gross domestic product (GDP) so we can compare big countries and small countries, rich countries and poor countries on an equal footing. 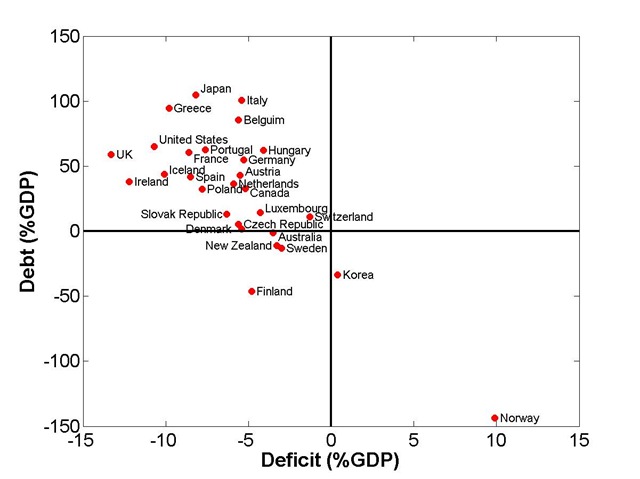 As we go to the top left area of this graph we find countries which are in the deepest hole, digging fastest. Out of the extreme left we find the UK – it is digging its hole fastest at the moment, but it is not in the biggest hole – that honour currently goes to Japan. On this graph our nearest neighbours are Ireland, the United States and Iceland, with Greece and Japan having higher debt but lower deficit. France and Spain have similar debts but rather lower deficits.

Norway is actually bringing in more money than it spends and building a surplus, they have large oil revenues and are saving against the day when it runs out. Korea is doing this too but to a far smaller extent.

Economically it is often said that the PIGS or PIIGS countries are in most trouble in Europe, these are Portugal, Ireland, (Italy), Greece and Spain.

But is it true to say we are like Ireland, the US and Iceland? Ireland and Greece have much higher levels of unemployment than us, whilst the US has slightly higher levels and Iceland’s levels are comparable. Iceland has very high inflation (12%) whilst most other countries have moderate inflation including the UK, with a few countries having moderate deflation including the US and Ireland. We have moderate levels of unemployment, with Ireland, Greece, the US having much higher levels. It’s also worth pointing out that the UK has a population of 60,000,000 whilst Ireland only has 4,000,000 and Iceland a mere 300,000.

So whilst in deficit/debt terms we may resemble other countries in other, economically relevant ways, we are quite different.

From a mathematical point of view there are methods for measuring the closeness of things based on large numbers of variables, called clustering algorithms. These algorithms amount to our eyeballing of the debt/deficit data – they are a measure of distance. However, in economic problems things aren’t so simple. The economy is described by many variables and I don’t know their relative importance in determining economic similarity. The problem that the numbers involved may vary tremendously in size is trivially solved. My suspicion is that economists have probably spent a great deal of time arguing about economic similarity and haven’t come to a definitive answer.

So in answer to the question: What country is the United Kingdom like economically? Although the UK may be most like Ireland, the US and Iceland in debt/deficit terms. In terms of many other economic factors such as inflation, unemployment and so forth it is quite different. I suspect the real answer to this question is that the UK is most like France, Germany and Italy economically: these countries are of similar size, have similar unemployment rates, have inflation of the same sign, usually run public sector/ private sector ratios of similar size furthermore given their common membership of the EU their economic behaviour is probably similar. Of this group of countries Italy has the largest debt and we have a largest deficit.