Some notes on SQL: 1 – creation

A sceptical look at the economy 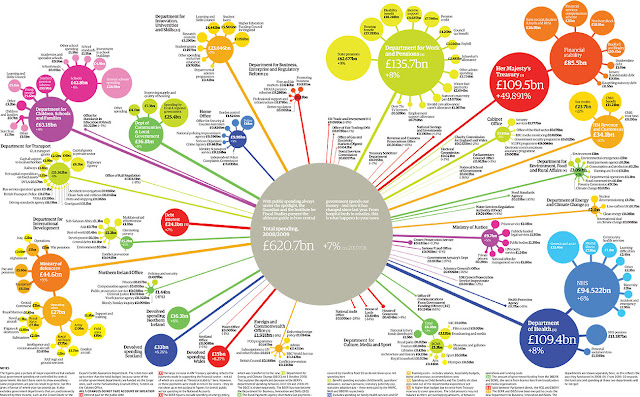 This blog post was written partly because I’d got fed up with hearing about how all cuts were evil, without hearing an alternative plan. It has ended up more a collection of interesting data sources, and some mild ranting.

First to define some terms: The gross domestic product (GDP) is a measure of the total economic output of the country. It’s handy because we can use it to compare any other number we come up with to see how big they are. £1billion may sound like a lot, but the GDP is £1.5trillion, so £1billion is a less than 0.1% of GDP.

The debt is the total amount of money that the state owes; the deficit is the annual gap between what the state takes in taxes and what it spends. A debt is sustainable in the long term but running an annual deficit above a certain size, for a period, is not sustainable. The deficit can be divided into two components: a cyclical component which goes up and down with current economic conditions and a structural component which is on top of this. The structural component is the bad bit. There is some dispute over the validity of this division since economic cycles are not easy to define.

I’m a big fan of the Guardian’s government spending chart (see the image at the top of page), it’s a rather pretty way of seeing where government spending goes. For the year 2008/9 the total spending is £621bn, in this year the Treasury gets an enormous, anomalous amount in financial stabilisation (18%) – this will not recur in future years. Beyond this there’s the Department of Health, spending about 18%, Department of Work and Pensions (22%) with the largest fraction of this going on the state pension, Department for Children, Schools and Families (10%). The key point here is that a very large chunk of the money spent is spent on things that people very vocally want (schools, health care, state pensions).

The figures for where tax comes from are perhaps a little surprising, extracting the data from table 1 in this report by the Institute for Fiscal Studies. The major chunks are shown in the piechart below: 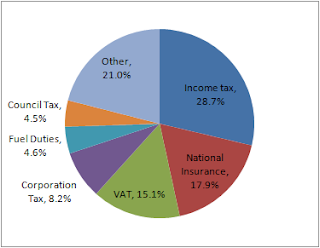 The “other” category is made up of various minor indirect taxes (tobacco, alcohol etc) and capital taxes (3%). The surprising thing to me was the relatively low level of corporation tax. There seems to be evidence of tax avoidance by corporations amounting to something in the region of £10bn, but this would only be roughly 1.6% of the tax take.

By the way, as a physicist, I look down on piecharts!
The total tax take of around 36% of GDP puts the UK roughly in the middle of the OECD table of taxes, with countries like New Zealand and Germany taking very similar levels of tax, France, Italy and Finland taking rather more (at around 44%) and countries like Ireland, Switzerland and the United States taking rather less at ~30%. The full OECD data is here, and wikipedia has a sortable list for all the countries of the world. An interesting exercise is to consider this list, and think in which countries you might want to live.
Of income tax the top 1% of earners pay nearly 25% of all income tax, you can see the full breakdown in this article on the BBC website. Put another way, the 40% tax band covering perhaps 15% of tax payers provides nearly 40% of income (here). This does exclude National Insurance contributions though. I was surprised by these figures, I’d assumed that the relatively small number of higher tax rate payers would result in a much lower total take.
The net result of these incomings and outgoings is that we had a national debt of 68.1% of GDP at the end of 2009, and a total deficit of 11.4% of GDP. (According to the Office of National Statistics). According to the newly formed Office of Budget Responsibility  (table 4.5) the national debt (which they call net debt) is 53.5% this year and the deficit (net borrowing) is 11.1% of which 8.8% is structural.
Numbers without context are meaningless: a priori I have no idea how these numbers for debt and deficit compare to the past. However, help is at hand: this report shows how they have varied over the past 100 or so years. I’ve copied the key figure for national debt below: 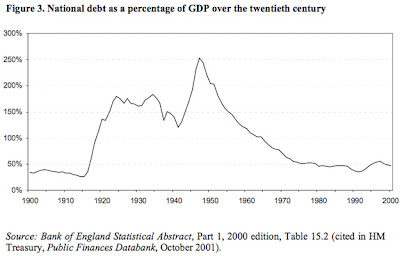 At the end of the second world war the UK had a national debt of around 250% of GDP, much larger than our current debt (and even our predicted debt over the next few years). Interestingly we see in the same report (figure 1) that the deficit is rarely negative (i.e income greater than expenditure), hovering around 2% (i.e. still a deficit) debt is still paid off via growth in the economy and inflation.

I suppose the purpose of all of this preamble is a discussion of cuts, or if you prefer tax increases. Prior to the election everyone seemed to agree on the size of the gap to be filled but none of the parties managed to fill more than 25% of the gap, as evidenced in this report by the Institute of Fiscal Studies, the Guardian’s data blog had a nice breakdown of the measures proposed by the three main parties. The major political point of departure was when cuts should start (not if cuts would start), and my view prior to the election was that whoever won broadly similar levels of cuts would be made although there was some evidence that the balance between taxation and cutting would be different depending on party but since none of them revealed (or had) much of their plan it’s rather difficult to say.  It is a very minority view that no cuts are required, although I see the unions are trying that one out today along with threats if there are any cuts.

YouGov,  for the Sunday Times, helpfully asked the public:

“The government has asked for public advice on where it should cut public spending. Which, if any, of the following areas do you think should be targeted for cuts? Please tick up to three”.

And the public demonstrated that if you ask a stupid question, you get a stupid answer (or, being generous to the public, if you ask a question without providing contextual information you get a stupid answer). I considered trying to find a fancy way of presenting this information, but in a nutshell: by far the most popular area for cuts (61%) is in international aid whose total budget is 0.8% of total spending (i.e. pretty much the smallest bit of the budget you can find).

To be fair to the public, many of them will be working in the private sector and will have variously experienced pay cuts (or at least freezes), reduced working, redundancies, budget reductions and frozen recruitment and they may well be feeling it’s someone else’s turn.

You can experiment with cuts yourself with this handy tool from the FT, have a play and think about how you’d stand up and justify the cuts you’ve made. To paraphrase Polly Toynbee: “Don’t be young, old, vulnerable, one of our brave boys, sick etc”.

The alternative to cuts are tax increases, but nobody seems keen to talk about them. Prior to the election there was a report stating that the deficit was equivalent to about 6p on the basic rate of income tax. Proposals to raise tax were normally described as a “Tax on jobs” or “Death tax”, which is unhelpful to say the least. Another popular idea is to tax the bankers, one option here is the Tobin or Robin Hood Tax which puts a small tax (typically fractions of a percent) on every financial transaction, because there are very many of these transactions potentially the amount raised could be large this would seem to require international coordination and it isn’t clear where the money raised would be spent (climate change, international aid, fund for future bank collapses have all been suggested). The banking sector contributes approximately £70bn to GDP, or 6.8%. The structural deficit isn’t about any money spent rescuing banks though, it’s about an ongoing gap between spending and taxation.

My personal view is that we should be talking about taxation, and where the balance between cuts and increased taxation should lie (currently it looks like 80/20 cuts to taxes). There should be some discussion of where tax rises are best levied : “on someone else” isn’t really a proper answer. Income tax seems like the best place to me, probably at basic rate with uplift of the lower threshold to protect some of the least well off, but possibly lowering the threshold to the upper tax bracket. In the longer term making the public sector more flexible to economic hardship would be nice, this time there seems to have been much more flexibility in how companies have approached recession – not necessarily painless, but better than losing your job. One element of this could be variable pay in the public sector (or bonuses as we colloquially call it) this provides two things to an employer: the ability to vary pay when income to the company is poor and some decoupling of current salaries from pension entitlements (since bonuses are typically not counted towards pension payments).

So to end on a happy note: I propose bonuses for the public sector!

* Update: hat-tip to AlexConner who pointed out that it is Mr Micawber not Uriah Heep who is responsible for the quote from David Copperfield.