A way of working: data science 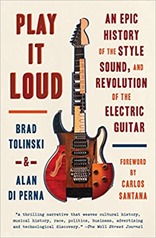 I took up the guitar a few years ago, and play in the manner described by Kurt Vonnegut, that’s to say with little skill but expanded horizons. I read The Birth of Loud by Ian S. Port a while back and Play it loud by Brad Tolinska and Alan Di Perna is in a similar vein, a book about the electric guitar and the music that came from it. Whilst The Birth of Loud focused on Leo Fender and Les Paul and a period from the early fifties to the mid-sixties Play it Loud starts earlier and extends later and is broader in scope.

Play it Loud is divided into chapters which typically cover one or two people and one or two guitars, each illustrating a technical innovation or change in musical style. Broadly each chapter follows on from the previous one in time, taking us from the 1920s and thirties in the first chapter through to around 2015 by the end. It finishes with a timeline, which I liked.

The book starts with George Beauchamp in the 1920s and the first guitar pickups designed to pickup the vibration of the strings rather than the vibration of the guitar body, this followed the invention earlier in the century of the electronic valve amplifier and the paper cone speaker – both prerequisites for useful electric guitars. Guitars had been around for some time, and in the twenties guitar-based Hawaiian music was popular in the US. Hawaiian stringed music had its roots in Portuguese sailors in the 18th century. Beauchamp with Rickenbacker produced the first electric guitar based on this technology, the A-32 ‘Frying Pan’ in 1932. This was a cast-aluminium lap-steel style guitar.

The next development was the Gibson ES-150 in 1936 with a bar pickup that sat under the strings, rather than over them as for the Beauchamp pickup, ES stands for electric Spanish – it was the first of its kind. The guitar was made popular by the endorsement of Charles Christian, a Jazz guitarist, who was considered better than Django Reinhardt and Les Paul at the time. He was to die at the age of 25 of tuberculosis. This type of endorsement is a recurring theme, celebrated musician endorsements are massively valuable to guitar companies.

By the early fifties a number of people had realised that the guitar body was largely a place to hang strings and pickups and no longer needed to be hollow – the hollow chamber of the guitar is the amplifier in an acoustic guitar. Thus was born the Fender Telecaster and then the Stratocaster and, at Gibson, the "Les Paul". This is the period covered in The Birth of Loud. It is worth noting that Les Paul was one of a breed of musician/technician who were to recur with Eddie Van Halen and Steve Vai in the late seventies and early eighties, who pushed forward the development of the guitar. I hadn’t realised but the very futuristic looking Gibson Flying V and Explorer models were born in this period of the late fifties – they were unpopular then but saw a resurgence in the early eighties.

The new solid-body electric guitar, Fender’s Precision Bass and new amplifiers meant that by the early sixties an electric four-piece band could fill a hall with sound (previously this required a big band or an orchestra and by the late sixties Jimi Hendrix could make rather more noise than that. At this point Tolinska and Perna highlight how the electric guitar fitted in with protest and counter-cultural – also citing Bob Dylan and his infamous switch to the electric guitar. His electric set at the Newport Country Festival was so short because it had only been brought together a few days earlier.

By the late sixties the quality of Fender and Gibson’s offerings was dropping, and players like Eric Clapton started looking for the discontinued Les Paul models. The drought in good quality guitars was to extend for a while, in the mid-sixties, when Fender and Gibson were dropping in quality Japan was producing a large number of cheap, low quality guitars. In this environment, an after-market parts market grew with names we recognise today like Seymour Duncan, Jackson Charvel and Larry Dimarzio. Japan was to later produce high quality guitars – Steve Vai chose Ibanez to make his signature model.

The book finishes with a chapter centred on Jack White of The White Stripes, and his enthusiasm for very retro, and not highly regarded guitars and amplifiers. This represents a thread running through the book, guitars are more than their technical components – the choice of guitar says something about what a players intentions are. So Eric Claption took up the discontinued Les Paul to ape the earlier blues players. The punk and garage bands were trying to get away from those blues roots, and cheap, plastic guitars fitted that vibe. They were also trying to get away from the comfortable middle class hobby guitarists (like me) who would happy spend a couple of thousand dollars on a signature or classic guitar because they could.

In common with my reading of The Birth of Loud I found myself googling for the guitars mentioned and thinking I should get one!