Book review: The Birth of Loud by Ian S. Port 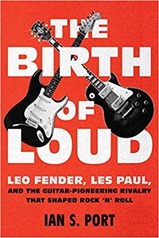 More guitars next with The Birth of Loud by Ian S. Port, this is the story of Leo Fender, Les Paul and assorted musicians and other guitar and amplifier makers.

As a recently started electric guitar player, and long time listener of guitar based rock, this is right up my street. It is most likely that any electric guitarists reading this will have a guitar with either the Les Paul or Fender name on it, or like me, have a cheaper variant of something like the Fender Stratocaster.

People started to attach amplifiers to guitars in the 1930s, the problem with a guitar is that it is not very loud when compared to other instruments. The problem with naive amplification of an acoustic guitar is feedback. The body of the guitar is a natural amplifier, it resonates at particular frequencies. Couple it with an electric amplifier and once you get above a certain volume the electric amplifier makes the body of the guitar vibrate, which it then re-amplifies making a horrible squealing noise (when done accidently). I know all this because feedback is an important part of undergraduate physics courses! Solid-bodied guitars avoid this problem by having no natural amplification.

Les Paul was a musician who experimented with instruments, guitars in particular and recording technology. He had a string of hits in the 1950s with his second wife, Mary Ford. He gave his name to the first solid body guitar from the Gibson company. More importantly he demonstrated what the new electric guitar could do. In terms of guitar hardware Les Paul feels somewhat incidental, as a musician he experimented with his guitars and recording equipment but he had very little involvement with Gibson and the guitar that bore his name.

Leo Fender on the other hand was a technician, an expert with design and electronics. He collaborated closely with musicians to bring them the instruments and amplifiers they wanted but he did not play music himself.

Both men had produced solid-body guitars in the 1940s which were pretty close to fence posts with strings and pickups attached. Such devices worked as guitars but ergonomically and aesthetically they were poor. They weren’t alone though, Paul Bigsby made what is arguably the first practical solid-body guitar and lap steel guitars with solid bodies had also been around for a number of years

Fender’s first solid-body commercial guitar was the Telecaster launched in 1950, renamed pretty much at birth from Broadcaster because Gretsch had a drum kit called the Broadkaster and threatened to sue. This was followed by the Precision Bass (1951) whose design is also apparent in the Stratocaster which came later (1954). These instruments had somewhat prolonged and difficult births. Fender was keen to perfect them, and whilst his sales team led by Don Randall went out and sold them there were frequently long waiting times in the early days and designs were finalised and production ramped up. The early Fender factory sounded rather chaotic, and there were problems with product quality. The Gibson Les Paul was first released in 1952.

It strikes me that the Les Paul / Leo Fender rivalry is actually relatively unimportant. Les Paul was one a a range of musicians whose demands drove the development of electric guitars and amplifiers. If Fender had rivals it was with Gibson, Rickenbacker and other guitar companies. They vied for the imprimatur of the popular artists of the time, Les Paul initially but then musicians like the Beatles, Eric Clapton, and Jimi Hendrix.

Carol Kaye is also introduced, I first came across her in a BBC4 TV programme Guitar, drum and bass. She appeared as a bass player on an enormous number of hits from the sixties, playing as a highly sought after session musician at a time when you get the impression that songwriters didn’t bother writing a bass part but left it to the session player to come up with something on the spot. The link with Fender is the Precision Bass she used.

I had fun hunting down some of the tracks mentioned in the book, Dickie Dale and the Del-Tones – Misirlou is a particular favourite which I’m trying to learn to play. Fender’s contribution to Dickie Dale were robust high watt amplifiers with spring reverb which made the surfer rock sound. And if you want to hear Les Paul then Lover published in 1948 is an important milestone. It is like nothing else that went before.

The bulk of the story ends at the close of the sixties with an epilogue describing what happened to everybody in the aftermath. Both Fender and Gibson became parts of larger organisations, CBS and Norlin respectively. They both seemed to have suffered from corporate neglect, leading to poor quality products, until they experienced a revival in the late eighties following sales to private investors. Gibson recently filed for bankruptcy whilst Fender seems to have thrived.

The book is comprised of many short chapters with long titles. It’s a very easy read, and a nice story. There’s a lot of the descriptive prose of imagined meetings and scenes that I associate with this style of journalistic story telling. It is well referenced, and the final sections of the book provide ample pointers to those who wish to learn more about the history of the electric guitar.