Book review: The Art of More by Michael Brooks 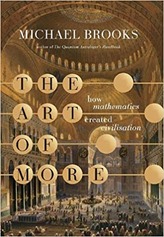 The Art of More by Michael Brooks is a history of mathematics written by someone whose mathematical ability is quite close to mine – that’s to say we did pretty well with maths at school but when we went to university we reached a level where we stopped understanding what we were doing and started just manipulating symbols according to a recipe.

The book proceeds chronologically starting with origins of counting some 20,000 years ago and finishing with information theory in the mid-20th century with chapters covering arithmetic, geometry, algebra, calculus, logarithms, imaginary numbers, statistics and information theory.

It is probably chastening to modern mathematicians and scientists that much of the early work in maths on developing the number system, including zero and negative numbers, was driven by accounting and banking. Furthermore, much of the early innovation came from China, India and the Middle East with Western Europe only picking up the ideas of zero and negative numbers in around the 13th century.

Alongside the development of the number system, the ancient Greeks and others were developing geometry, the ancient Greeks seemed to go off numbers when they discovered irrational numbers – those which cannot be expressed exactly as a ratio of integers! Geometry is essential for construction, surveying, navigation and mapmaking – sailors have often been competent mathematicians – through necessity. Geometry also plays a part in the introduction of accurate perspective in drawings and paintings.

Complementing geometry is algebra, developed in the Arabic world. Our modern algebraic notation did not come into being until the 16th century with the introduction of the equals sign and what we would understand as equations. Prior to this problems were expressed either geometrically or rather verbosely.

Leading on from algebra was calculus – the maths of change. It started sometime around the beginning of the 17th century with Kepler calculating the volumes of wine barrels whilst he was preparing for his wedding. There was further work on the infinitesimals through the century before the work by Newton and Leibniz who are seen as the inventors of calculus. I was struck here by how all the key characters in the development of calculus Newton, Leibniz, Fermat, Descartes and the Bernoullis all sounded like deeply unpleasant men. Is this the result of the distance of history and the activities of various proponents for and against in the intervening centuries? Or were they really just deeply unpleasant men?

Doing a lot of calculation started to become a regular occurrence for sailors, as well as people such as Kepler and Newton working on the orbits of various celestial bodies. John Napier’s invention of logarithms and his tables of logarithms, published in 1614 greatly simplified calculations. It converted multiplication and division into addition and subtraction of values looked up in his tables of logarithms. The effort to create the tables was massive, it took 20 years for Napier to prepare his first set of tables, containing millions of values. Following Napier’s publication in 1614 logarithms reached their modern form (including natural logarithms) by 1630. In addition mechanical calculating devices like the slide rule were quickly invented. I grew up in a house with slides rules, although by the time I was old enough to appreciate them electronic calculators had taken over. Napier was also an early promoter of the modern decimal system. Logarithms also link to exponential growth, highly relevant as we still wait for the COVID pandemic to subside.

Historically the next area of maths is the invention of imaginary numbers, if you don’t know what these are then I’m not going to be explain in the space of a paragraph! There is a link here with natural logarithms through Euler’s identity which somewhat ridiculously manages to link e, pi and i in one really short equation. I was not previously familiar with Charles Steinmetz who introduced complex numbers into the analysis of electrical circuits responding to alternating currents – although it is a very elegant way of handling the problem and a method I used a lot at university. Largely when we talk about complex numbers we are discussing the addition of i, the square root of -1, to our calculations. But there are additionally quaternions, invented by William Hamilton, which add three complex numbers: i,j and k to the real numbers but the limit is octonions – a system of seven complex numbers and the real numbers. I am curious as to why we cannot have more than 7 flavours of complex numbers.

Statistics is my area of mathematics, I’m a member of the Royal Statistical Society. I think the thing I learned from this chapter was that the word "statistics" has its origins in German and "facts about the state". I quite liked Brooks’ description of p-values which seemed particularly clear to me. Brooks highlights some of the sordid eugenicist history of statistics, as well as the more enlightening work of Florence Nightingale and others.

The book finishes with a chapter on information theory, largely based on the work of Claude Shannon but with roots in the work of Leibniz and George Boole. George Boole invented his Boolean logic in an attempt to understand the mind in the mid-19th century but his work on "binary" logic was neglected for 70 or so years until it was revived by Shannon and other pioneers of early computing.

This is a fairly informal history of mathematics, I found it very readable but it includes a number of equations which might put off the completely non-mathematical.