Book review: The Age of Wonder by Richard Holmes

This is a blog post about other people, and their cow-like impassiveness whilst obstructing the path of the righteous. It’s also a chance to be a bit pretentious since I discover that Jean-Paul Sartre wrote in his play, “No Exit”:  that “L’enfer, c’est les autres” or “Hell is other people”, and the title of this blog post itself is that of a play by Moliere.

Mrs SomeBeans and I have just returned from holiday, so the focus of today’s rant is largely the people we have come across in the process (v. nice holiday, some pictures here). A similar species can be found around most supermarkets, on the streets of Llangollen.
It starts off in the airport, where mysterious large groups of sociable people travel together, weird extended families. Typically you’ll first meet an outrider in the queue to check-in (for us this usually happens at about 5am when we are not at the peak of our reasonableness), but then a gathering horde appear who can’t join the back of the queue: they have to join in front of you with the outrider. And nothing is simple for them, once at the check-in desk there is a great shuffling of passports and luggage as they casually mention that one member of the group will be along shortly.
Then there’s the security control, here my ire is split between authorities and punters. I mean, how the hell am I going to injure anyone with Lipsalve? To credit the cow-people they slowly seem to be coming around to the idea that they have to do a load of weird stuff for the benefit of security theatre.

Then there are the duty-free shops, I’ll ask the rhetorical question “Why, oh why is so much space committed to the sale of duty-free which could so much more usefully be dedicated to something useful like seating?”. I know the answer, it’s because shops pay rent, punters are just self-loading cargo. It doesn’t make me less angry. I spent an hour in Salzburg’s post-security hell-hole wondering how best to foment revolution. I considered standing on a bin and urging the crowded mass to invade the duty-free shop and cast the merchandise to the floor, and lie down upon the vacated shelves.

Then you get on the plane, and it seems no one has planned for this eventuality and spends 10 minutes taking things out of their carry-on bag, putting the bag in the overhead locker, sitting down, standing up, taking more things out of the bag and putting some away again, repeat. All the while the cabin crew keep saying “Please get on and sit down so we can take off”.
Then you get off the plane and a group of teenagers have made it down the stairs off the plane and just stopped dead at the bottom. This is a recurring theme: there are places to stand, an infinity of them, where you disrupt no one elses business. However, the cow-people seek out those places where they maximally obstruct others, gazing at each other with cow-like eyes, lowing gently.
Next is baggage reclaim. At the risk of sounding like an old fogey here, there’s no way that my parents would have let me frolic about the luggage carousels in the airport, as modern children seem to be encouraged (partly because we never flew to go on holiday). There’d definitely be sharp words and clips round ear, but not these days. If it was down to me I’d be equipping luggage carousels with special finger-slicing blades.
Skiing offers special opportunities for standing in the way like a cow-person; ski lifts are natural constrictions: a world of skiers is funnelled into a narrow gap, through electronic barriers to some lifting device. So naturally you’ll find half-wits that zoom into the constriction and only then decide that they cannot proceed without friends or family. And you try acting nimbly whilst wearing skis. The people featured here: 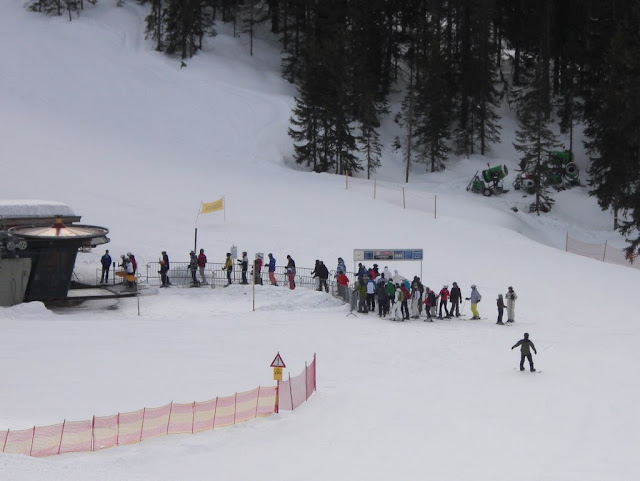 … look like they acting purposefully, but they’re not – they’re dithering.


Naturally, through all of this we never say a word. Except now.