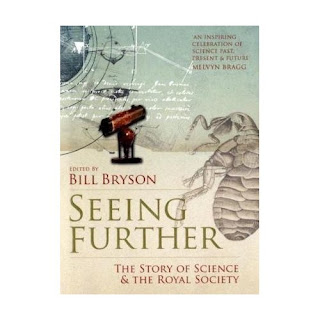 My writings on Seeing Further: The Story of Science and the Royal Society became unmanageably long, so I have split it into two parts, this is the second part, the first part can be found here.

In the earlier chapters there was much philosophy and history. Henry Petroski writes on bridges, which I must admit surprised me a little as an area of interest for the Royal Society but the link is there. When Robert Stephenson proposed the design for the original Britannia Bridge it was William Fairbairn, soon to become a fellow of the Royal Society, who carried out experiment studies to establish the shape of the iron box-sections. This was done by testing the strength of scale models, and progressively increasing the size of the models – extrapolating the results to the full-size bridge. Later he went on to investigate metal fatigue, which had led to several serious rail disasters in the 19th century.

We’re heading into living memory now, with Georgina Ferry’s chapter on structural biology through the medium of x-ray crystallography. A field in which Britain led the world in the middle of the 20th century. This period sees the election of the first female fellow of the Royal Society, Kathleen Lonsdale, in 1945, who made some of the first determinations, by crystallography, of the structure of small molecules. Following this Dorothy Hodgkin determined the structure of penicillin in secret work during World War II. This type of investigation reached a climax with the determination of the structures of first proteins, massive efforts taking Hodgkin 35 years for insulin and Max Perutz taking 22 years for haemoglobin. Georgina Ferry’s biography of Dorothy Hodgkin is well worth a read and covers in more depth much of the material in this chapter.

Steve Jones, geneticist, provides a chapter on biodiversity. We believe that evolution provides a good explanation of how species arise and change over time. The subject of biodiversity addresses the question: how many species can we expect to find in a particular environment? And the answer is we don’t really know,  there don’t seem to be any rules that allow us to predict biodiversity. There are some observations, such as biodiversity is greater in the tropics than elsewhere but no real understanding of why this might be.

C.P. Snow wrote about the two cultures, what is less well reported are his comments on the gulf between “pure” sciences and applied sciences. Philip Ball expands on this theme, and makes a plea for a better appreciation of the engineers and technologists, under whose aegis much essentially scientific work is done. One of his examples are plastics (or polymers), the field in which I am trained.

Paul Davies asks how special are we? In cosmology we hew to the Copernican Principle, the idea that there’s nothing special about earth, nor the sun nor even the galaxy we find ourselves in: if we look around the universe we expect to find planets, suns, galaxies just like our own. It is only when we enter the highly speculative area of the multiverse that this part of the Copernican Principle starts to break down. Related to this questions is the more open one of “Are we, intelligent life forms, special?”. We simply don’t know whether life, or intelligent life is common in the universe.

I hope you’re not getting bored of this machine gun delivery of chapter synopses!

Ian Stewart writes on the importance of mathematics, often hidden from view even to those in the know. He uses the example of the recent Mars missions, which fairly evidently use the mathematics of Isaac Newton (a fellow of the Royal Society), but less obviously the work of George Boole (another fellow living 1815-1864). Boole is responsible for providing the foundations of modern computing through his Boolean logic – the ones and zeros on which computers thrive. Compression and error-correction algorithms also make heavy but invisible use of mathematics. JPEG compression, in particular, uses the work of, foreign member of the Royal Society, Joseph Fourier (1768-1830).

John D. Barrow is up next, he is a cosmologist. He starts off explaining the underlying simplicity of physical laws, and the attempts to unify the theories of different forces into a single “Theory of Everything”. The current best candidate for this theory of everything is string theory. He then discusses chaos and complexity: simple laws do not lead to simple outcomes. The behaviour of a pile of sand is not easy to predict.

The next three chapters have a a slight theme running through them. Oliver Morton starts off with the “blue marble” image captured from Apollo 17. This demonstrates, self-evidently, the spherical nature of the earth but beyond this it implies an isolation and stasis. There is little evidence of movement, or process taking place. Morton’s point is that the Earth is not a static system: light from the sun enters and great cycles turn over carbon, nitrogen and water in the system, taking these chemicals through the earth and the sky. This leads into thinking about climate change.

Maggie Gee starts off by introducing about apocalyptic writing, fiction about the end of the world (or at least after a great disaster). Gee is an author of such fiction, including The Flood and The Burning Book. I must admit I’ve always seen this as a genre that doesn’t really ask me to contemplate my own end, but rather selfishly imagine my survival in the aftermath. After this introduction she then moves on to discuss global warming and the part that writers might play in it’s communication. I found this a very interesting perspective. Most of the authors in this volume I’ve read before, Maggie Gee is one I haven’t read but aim to address this lack.

Continuing the global warming theme, Stephen H. Schneider is a climate scientist who has long been involved in the the Intergovernmental Panel on Climate Change (IPCC), as an normal author in the first two reports and a lead author in the second two reports. In this chapter he talks about introducing standardised language to describe uncertainty into the fourth assessment report, known as AR4. There is a clear need to do this because if the scientists writing the report don’t communicate their assessments of uncertainty then others, less-qualified, will do it for them. It’s not that uncertainty was unrecognised in previous reports, but it’s communication was not clear. Schneider was involved in preparing clear advice in this area. Persuading scientists to use well-defined language to communicate uncertainty seems to have been a battle.

Gregory Benford talks about time, firstly he talks about the Deep Time discovered in the 19th century by geologists such as Charles Lyell FRS. This was the realisation that the earth had been around rather longer that the few thousand years that a literal reading of the bible suggested. This change in thinking was based on an assumption that the changes in landscape seen in the present were largely all that was required to create the landscape, this is in contrast to the prevailing view of the time based on cataclysms like the biblical Flood. Also, Darwin was of the view that evolution would have required hundreds of millions of years to lead to the diversity of species seen today.  The great age of the earth was subsequently confirmed using radioactive decay measurements. Also discussed is time and it’s merging into space which is central to Einstein’s general theory of relativity. Benford is a scientist and science-fiction writer, I can recommend Cosm, a story about physicists who create a universe in a particle accelerator and drive it off in a pickup truck.

And finishing off with a chapter by Lord Rees, the current President of the Royal Society. Rees looks forward  to discoveries in the next 50 years; at various times in the past people have claimed we are coming to the end of science. Rees points out that each new discovery opens up new areas, so feels there’s no risk of us running out of science to do. He also writes of the continuing role of scientists as advisers, a task that the Royal Society continues to coordinate and drive. And the finally on moral responsibilities of scientists, on which I wrote a little previously with regard to the atomic bomb.

All in all I found this a very enjoyable read, some of the philosophical and literary chapters I would not have read as full length treatments but enjoyed in shorter form. The links to the Royal Society are tenuous in many of the chapters, so perhaps it’s best to approach this book as a sampler for fine science writing.