Some notes on SQL: 2 – Basic SELECT

Some notes on SQL: 3 – changing a table 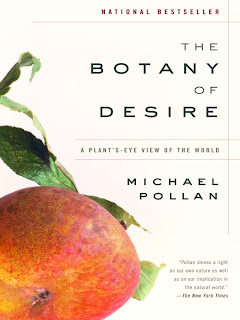 The introduction lays out the land of the book, sections on apples, tulips, marijuana and potatoes and the central thesis: that it’s a useful idea to consider that not only do we domesticate plants but that in a sense plants naturalise us. As stated in the introduction this thesis felt a bit hardline, grating a little for my taste but once into the reading this feeling receded since the illustrative stories are enticing and nicely written.

First up, are is the story of apples in American and the folk hero, Johnny Appleseed, who travelled the mid-West, setting up ad hoc orchards from seeds, a little way in front of the settler-wave, and sold them trees as they moved into the area.

The point about apples is that they don’t grow true from seed, take a fine apple and plant its seed and what you get is a lucky dip. This is a recurring theme, plants amenable to domestication appear quite often to be those amenable to quickly producing a wide variety. To grow “true” from an apple you need to graft from the parent onto a root stock. It’s always struck me as something of a miracle that grafting works and that people managed to discover it.

Apples were significant to the early settlers since they offered sweetness (sugar would not have been very available), a sense of order when planted in neat orchards and cider. It seems cider played a big part in the popularity of Johnny Appleseed during his life, since the apples grown from seed were most often best suited to cider-making rather than eating. After he died the temperance movement gained strength in the US, and this aspect of apple cultivation was pushed into the background.

Despite the focus on Johnny Appleseed (and comparisons to Dionysus) the thing that will remain with me from this section is the descriptions of the wild apple forests around Alma-ata in Kazakhstan. You can get a flavour of the place from the fabulous images here, in an article in Orion Magazine and here, on the BBC website. These wild trees are important because they represent massive genetic diversity. The drawback of grafted plants is that they are genetically identical to their parents, so over time they become more and more susceptible to pests and diseases which evolve freely to take advantage of their stasis. After the apples come the tulips, and Tulip Mania amongst the unlikeliest of enthusiasts: the Dutch. Tulips are a relatively recent addition to the pantheon of flowers, unlike the rose and the lily which appear in the Bible, tulips appear to have been introduced to Europe from Turkey in around 1550.

Interesting thought from this section: flowers became beautiful before there were ever humans to appreciate them – in a sense flowers are the result of the aesthetic decisions of bees (and other pollinating insects).

Tulip Mania was a speculative bubble in the Netherlands slightly before the middle of the 17th century wherein the prices paid for tulip bulbs skyrocketed, a single bulb fetching the equivalent of a acres of land or a fine townhouse, only to crash thereafter.

The flower in the picture to the left is Semper Augustus, emblematic of the most valued of the tulips during tulip mania. The interesting thing is that the most prized of these flowers – those that had “broken”  – were actually suffering the effects of a virus from which their line would eventually weaken and die. “Broken” refers to the variegated appearance with a dark colour, appearing in streaks on a lighter background. The modern Rembrandt tulips are similar in colouring but, according to Pollan, less impressive than the best of the virus “broken”.

The third section is devoted to marijuana, clearly a plant for which the author has some fondness. Marijuana has long been cultivated for two reasons: one for fibre as hemp, and one for drugs. Since the early 80’s and the American “War on drugs” marijuana production has been pushed underground, or rather indoors. Pollan recounts the story of the recent cultivation of marijuana by Dutch and American growers. The plant has undergone fairly rapid change in the last few years with the crossing of the large, traditional cannabis sativa and the more compact, frost resistant cannabis indicas. A substantial amount of work and horticultural ingenuity has gone into this process, leading to plants that can produce high yields of the active material in small, indoor spaces. The prize being the $13,000 that a hundred plants grown on a 6 foot square table can yield in a couple of months.

For Pollan there is an element of horticultural challenge in this process, he clearly grows a wide range of plants  in his own gardens (from each of the sections of this book) valuing the challenge and the diversity. The garden at SomeBeans Towers is similar: more a plantswoman’s garden than a designer’s garden.

He digresses at length on purpose of intoxication and whether drug taking really does open the doors of perception, or just lead to inane blithering, falling eventually for the former. There’s an interesting section on the neuroscience of cannabis.

The book finishes with a chapter on potatoes, in particular on a genetically modified potato called NewLeaf which was developed by Monsanto to express the pesticide from the Bacillus thuringiensis bacteria (Bt). Organic certification schemes allow the limited ‘manual’ application of the Bt pesticide. In this chapter he visits various potato growers, spanning the ultra-technological to the organic. He highlights the dilemma that he finds GM potatoes more palatable than the non-organic equivalent when presented with the choice, in large part because the level of inputs, in particular fungicides and insecticides, to conventionally grown potatoes is very high.  His visit to an organic highlights something from the organic movement in which I’m in favour: which is a willingness to explore different methods of cultivation (and a wider range of cultivars), where I part company is where they say “There must be no X” where X is a somewhat arbitrarily drawn list, enforced with religious fervour.

The section also covers the history of the cultivation of the potato, from the wide variety in the mountain gardens of its native Peru, to its introduction into Europe as a favoured staple crop. Prior to the introduction of the potato bread was the staple food in Europe; wheat is somewhat fussy in its growing conditions particularly in Northern Europe and getting bread from wheat is quite an involved process. Potatoes, on the other hand, are less fussy on growing conditions and exceedingly simple to prepare for eating (stick in fire and wait, or if feeling extravagant: boil in water).

Overall I enjoyed this book, each section seemed to divide into two unlabelled parts one largely factual and one rather more philosophical – I preferred the more factual sections but appreciated the philosophical too.