Some notes on SQL: 4 – Advanced select

How does a magnet work? 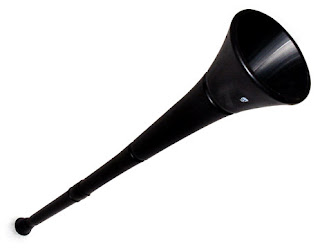 How does a magnet work? This question arose on “I’m a Scientist, Get me out of here“, a fine piece of science communication which involved putting scientists in contact with school children. This is my attempt at an answer, which says a bit more about science in general but is utterly untimely. The short answer to the question is that magnets are made from atoms which act like little magnets and in a proper magnet are all lined up, but as an answer this is somewhat unsatisfactory.

The individuals in this group are atoms in a material, and the vuvuzelas represent the magnetic field of a single atom. Groups of players facing in the same direction represent magnetic domains and the band leader represents an applied magnetic field. The point about ferromagnets is they massively enhance an a magnetic field applied by something like a coil of wire with a current flowing through it – this is how you make an electromagnet. The difference between a “magnet” and any old bit of ferromagnet is that in a “magnet” all the domains have been lined up to face the same way.

In paramagnetic materials vuvuzelas players ignore their neighbours and play away in random directions, they respond in a somewhat feeble fashion to the directions of the band leader.

In diamagnetic materials the crowd have no vuvuzelas but use their hands as a substitute, rather petulantly they face the opposite direction to that proposed by the band leader. In scientific language the hands represent induced magnetic dipole moments.

We really don’t know why the electron acts as a magnetic dipole, it is ascribed to a property known as ‘spin’ but it can’t be spin as we normally define it since electrons are, as far as we can tell, point-like – nobody has every managed to measure the diameter of an electron. Therefore how can we meaningfully describe it as spinning? In a sense the origin of the electron magnetic dipole moment is not important, it exists, we know what it is and we can use the measured value in our calculations for designing magnetic materials. This question of the “why” of fundamental properties of sub-atomic particles is what string theory seeks to address. For most scientists the answer is unimportant for practical applications, but for physicists in particular it is a nagging unpleasantness that we don’t know why.

Magnetism and electricity have been known since antiquity but as two very separate phenomena, and unsurprisingly really. Magnetism is a property of some funny rocks (lodestone) whilst electricity is a property of rubbed materials, and lemons. The connection between the two is far from obvious, the link was made in the early part of the 19th century. This is a recurring theme in science, we blithely teach that such and such is true, implying that it’s truth is pretty much self-evident and elide the fact that for most of history we have not believed these things and that it has taken the painstaking work of a number of very great minds to reveal these self-evident truths. I must admit to being a little unsure of the history in this area, taught in England the key figures were Michael Faraday who did much of the experimental work in linking electricity and magnetism followed by James Clerk Maxwell who formulated a mathematical theory. In the experimental area in particular there were many other participants in the story, I suspect who takes centre stage depends on where you are taught.

So there you have it: magnets work because the vuvuzela players copy each other and play in the same direction.