God and the scientist 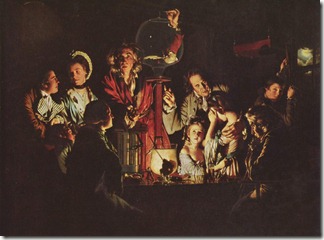 I’ve written previously about the Royal Society via the medium of book reviews: Seeing Further, Joseph Banks and Age of Wonder, and also in a data mangling exercise. This post is about “The Fellowship: The Story of the Royal Society and a Scientific Revolution” by John Gribbin, it describes the scientific world before the Society and the founding of the Royal Society. As with many books about this period, the front cover of my copy features “An experiment on a bird in the Air pump” by Joseph Wright of Derby and so that is the image I use to decorate this post. Following my usual scheme this review is really an aide memoire as much as a review.

The book opens with a set of brief biographies, starting with William Gilbert of Colchester (1544-1603), and his scientific study of magnetism: de Magnete (1600). This work on magnetism was unusual for it’s time in that it was very explicitly based on experimental observation, rather than the “philosophising” of Aristotelian school which imputed that the world could be understood simply by thinking. William Gilbert is relatively little known (ok – I didn’t know about him!), perhaps because his work was in a relatively narrow field and was superseded in the 18th century by work of people like Michael Faraday furthermore Gilbert seems to have spent most of his life practicing as a doctor with his scientific work playing only a small part of his life.

Next step is Galileo Galilei (1564-1642). He continued in the tradition of William Gilbert, eschewing the philosophical approach for experiment. In contrast to Gilbert, Galileo made contributions across a wide range of science for a long period – promulgating technology such as telescopes, microscopes and computing devices. This likely explains his greater fame. A detail that caught my eye was that as a professor of mathematics at the University of Pisa he was paid 60 crowns per year, whilst the Professor of Medicine gained 2000 crowns. For many early scientists, medical training appears to be the major scientific training available.

Francis Bacon (1561-1626) was more important as a parliamentarian, lawyer and courtier than a scientist. I link reluctantly to wikipedia in this instance, since in the opening paragraph they seem to be repeating the myth that he met his end through stuffing snow into a chicken to see if this helped preservation. His fame as a founding father of modern science is based largely on a book he didn’t write in which he intended to describe how a scientist should work – a scientific method. Perhaps more notably he had a vision as to how science might function in society at a time when there was no such thing as a scientist. It is apparently from Bacon that Isaac Asimov got his “Foundation”; it is the name of an organisation of scientific Fellows found in Bacon’s fictional work New Atlantis. Finally we are introduced to William Harvey (1578-1657), who identified the circulatory system for blood in the human body by a process of observation and experiment (published in De Motu Cordis (1628)) he was primarily a physician.

The point of this preamble is to say that, as the founding of the Royal Society approached, a number of people had started doing or proposing to do a new kind of science (or rather natural philosophy as it would have been called). The new natural philosophy involved doing experiments, and thinking about them – it was experimental science in contrast to the “received wisdom” from the ancient Greeks which was certainly interpreted to mean at the time that thinking was all that was required to establish true facts about the physical world. It’s not really accurate to say that one person did this and everything changed: rather that a shift had started to take place in the middle years of the 16th century. The foundation of the Royal Society can be seen as the culmination of that shift.

The Royal Society was founded at Gresham College in London on 28th November 1660, although it’s origins lay in Oxford where many of the group that would go on to form the Society had been meeting since the 1640’s. The Royal charter of the Society was agreed a couple of years later. The central figure in the Oxford group was John Wilkins (~1614-1672). The original Society included Christopher Wren, Robert Boyle and Robert Hooke amongst others. What striking is the political astuteness of the founding fathers as the monarchy returned to England in the form of Charles II, the first President, Viscount Brouncker, was a Royalist and the Society clearly identified that a Royal seal of approval was what they required from the very beginning. The Society had an air of purposefulness about it, not of airy philosophising for the amusement of gentlemen. The Society started publishing the worlds first scientific journal, “Philosophical Transactions”, and commissioning a history of their founding by Thomas Sprat only a few years later.  As a scientist I have picked out those names that mean most to me, however it’s very clear that the Royal Society was more than a group of scientists meeting to talk about science and the other less scientifically feted Fellows were equally important in the success of the Society.

Gribbin’s book then goes on to consider three men important in the early life of the Royal Society. Firstly: Robert Hooke (1636-1703), originally scientific assistant to Robert Boyle (1627-1691) who became the Society’s first “Curator of Experiments”. Prior to his appointment the Fellows appeared to be poorly organised in terms of providing weekly demonstration experiments for the Society’s education. Hooke was a really outstanding scientist, a skilled draftsman and maker of scientific equipment. The reason Hooke is not better known is largely down to Isaac Newton, with whom he had a longstanding feud and who outlived him. Newton (1643-1727) does not need further introduction as a scientist, his role in the Royal Society was to provide scientific gravitas (after Hooke had died) he was also President of the Society for the period 1703-27. Edmond Halley (1656-1742) was more important to the Society on the administrative side, he is chiefly remembered from the scientific point of view for his prediction of the return of a comet calculated using Newton’s theory of gravitation. He also spent a great deal of time persuading Newton to publish and trying to extract data from Flamsteed (the Astronomer Royal). In addition to this he invented a diving bell, wrote the first article on life annuities, published on the trade winds and monsoons, made observations of the stars of the Southern hemisphere and went on several scientific expeditions.

Some miscellaneous thoughts that arose as I read:

Overall I enjoyed this book, although it does sometimes have the air of a collection of short biographies of men who are already relatively well known. The most interesting part to me was the core part around the founding of the Society, bringing in some of the lesser known members and also highlighting the importance of the non-scientific aspects of the Society in it’s success.

In terms of scientific history reading, where next? “God’s Philosophers” by James Hannam seems relevant to understanding scientific activities prior to those covered in this book. A deeper investigation into Edmond Halley seems worthwhile, and I should also make another attempt at the Thomas Sprat history of the Royal Society.