Book review: The Signal and the Noise by Nate Silver

Once again I travel for work, more specifically to a NewsReader project meeting in San Sebastian, or in the Basque language, Donostia.

My trip there was mildly stressful, Easyjet fly direct Manchester-Bilbao but only on three days of the week – the wrong days for my meeting. Therefore I travelled via Charles De Gaulle Airport, which made a 1.5 hour transfer rather tight and led to me being obviously irritated with an immigration official. I should add that Charles De Gaulle Airport was the only stressful part of my trip.

Once at Bilbao it is a little over an hour on an express bus to reach Donostia. And it’s a rather odd experience. I’ve only visited Spain once in the past, to Barcelona and the rest of my knowledge of the country is from trashy TV about Brits on holiday and art house films (and books). The Basque country reminded me of the transfers from the airport to the ski resort I’ve made across the Alps. Steep-wooded valleys, chalet-style buildings scattered across hillsides with orchards and hay-meadows. Small towns wedged into the bottoms of valleys, apartment blocks creeping up the hillsides in the manner of the French rather than Austrian Alps. The only oddity is the occasional palm tree.

There is a fair amount of geology on display, I didn’t catch any photos from the bus but you get a hint of it from this photo of the bay at Donostia. 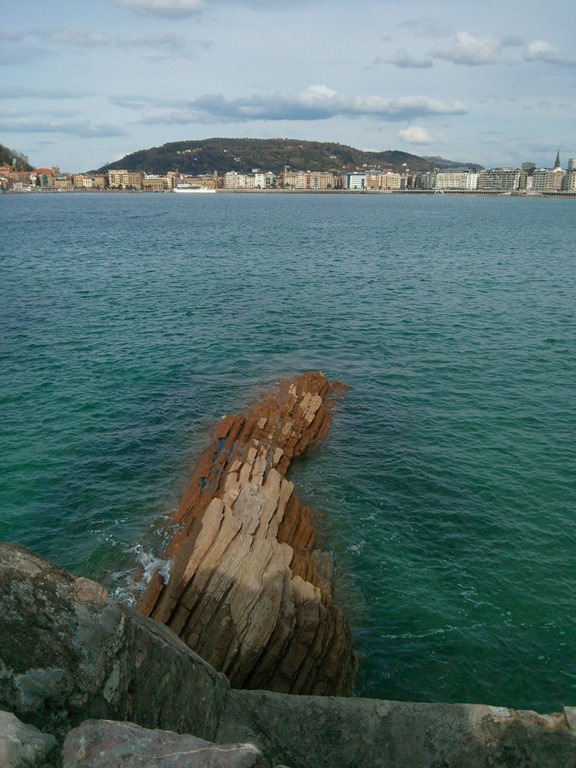 It was unseasonably warm whilst I was in Donostia, I remarked that I’d consider the temperature normal for Spain to one of my hosts, who replied; “You’ve made two mistakes there: (1) you’re not in Spain…”.

Once in Donostia, it is strikingly reminiscent of the North Wales coast and Llandudno! Fine buildings along a bay with a steep promontory looking down on the town.

The quality of the street furniture is rather better, and the buildings have a rather more wealthy feel. The local vegetation also reminds you that you’re not in Llandudno. 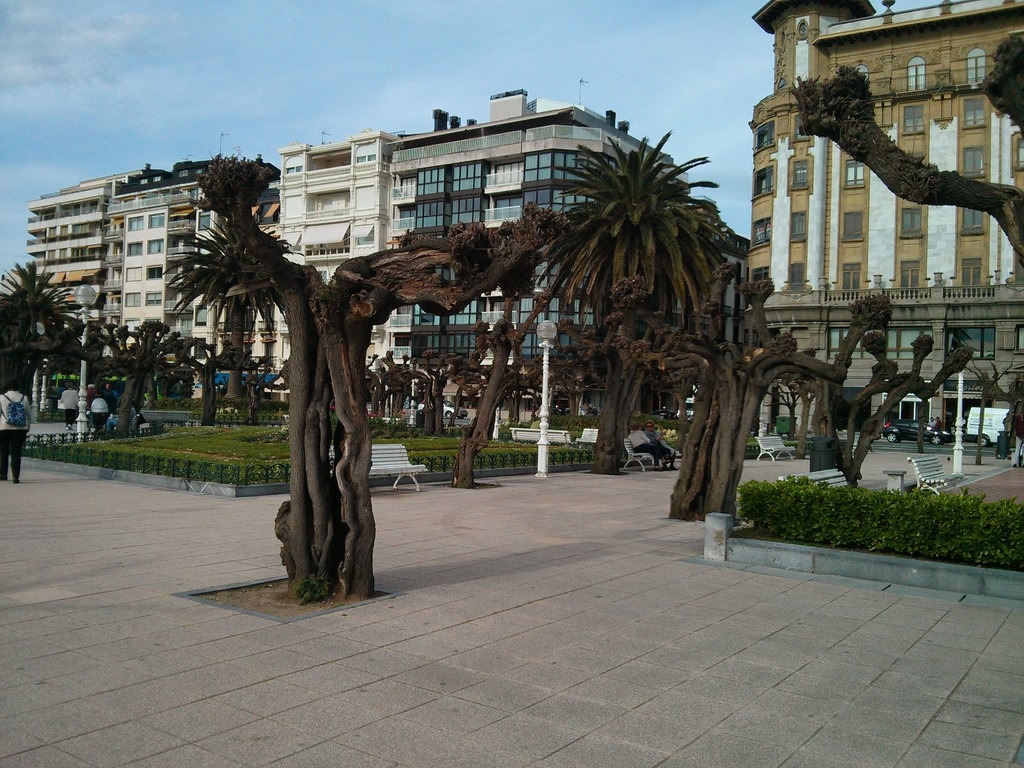 Apparently the Spanish royal family used to holiday in Donostia at the Miramar Palace, not really that palatial but it has fine views over the bay and the grounds reach down to the sea: 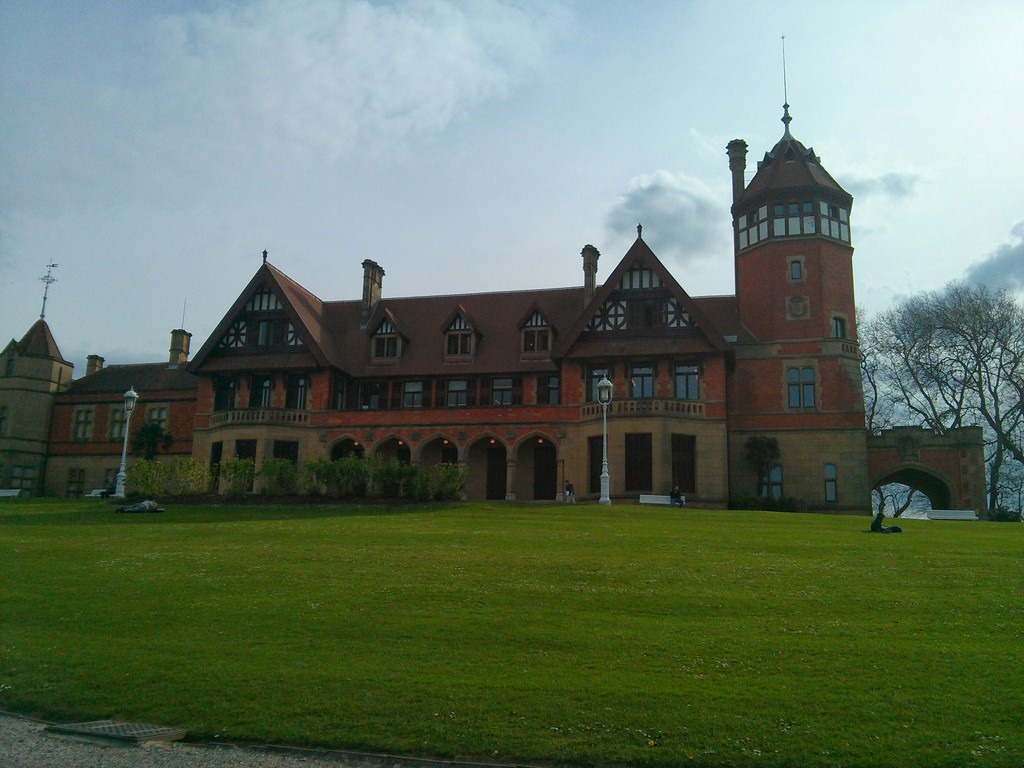 I wonder whether they used this rather ornate beach house: 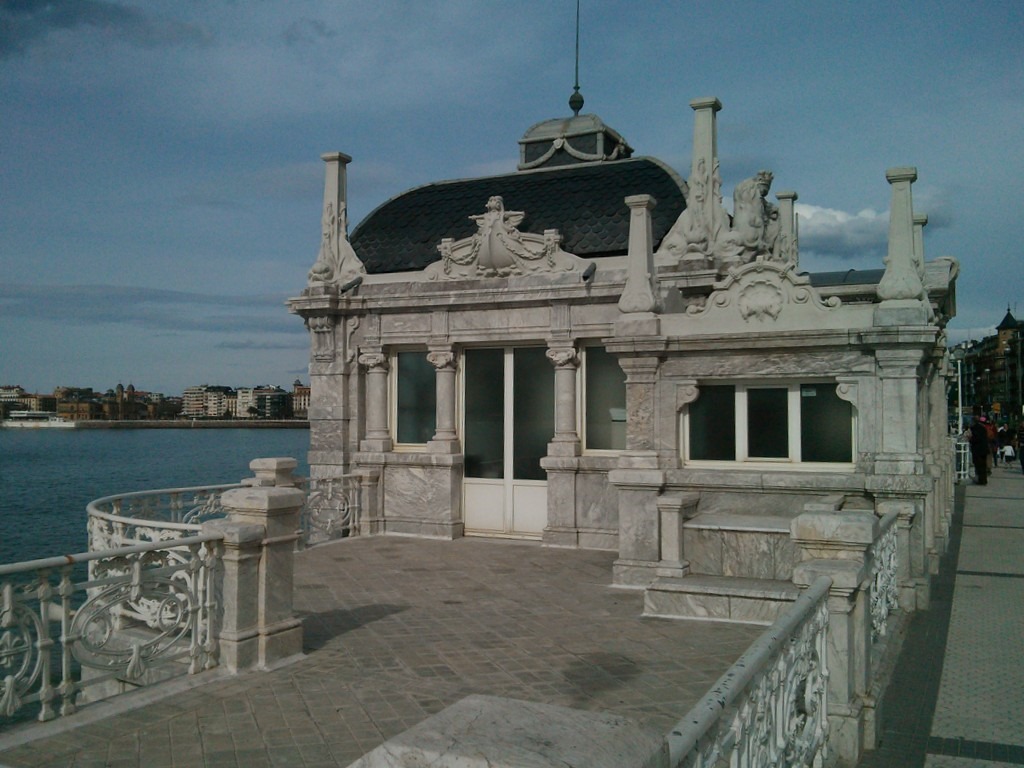 The town hall is pretty impressive too: 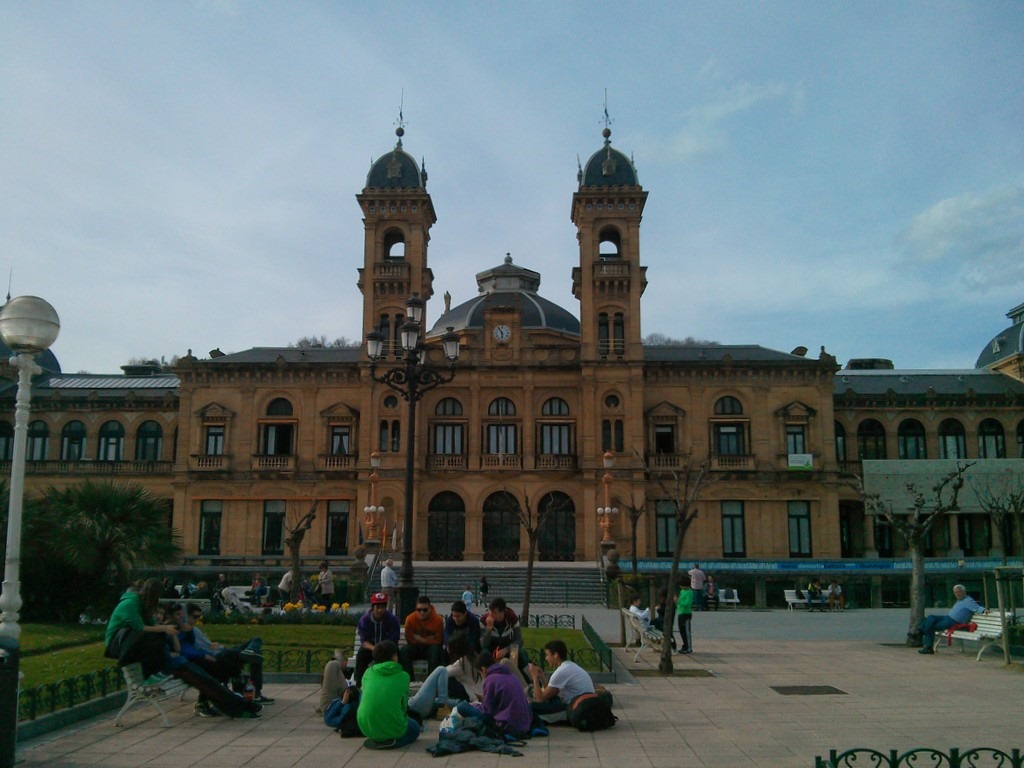 I failed a bit on local cuisine only making it out one night of three, to the Cider House. Apparently a typically Basque thing. The dining room is reached past large barrels of cider, which are the main event. The cider drinking scheme is as follows: at regular intervals the patron shouted something, and the willing and able followed him to a selected barrel. He opened a small tap producing a two metre or so stream of cider, projected horizontally. The assembled drinkers catch a an inch or so of cider each in large plastic beakers. Points are awarded for catching the stream as far from the barrel as possible, and once started the drinker moves up the stream. The next drinker aligns themselves to catch the stream when the previous drinker moves out of the way. The result is quite splashy.

Between drinks there is a fixed menu of bread, cod omelette, cod and greens, the largest barbeque steaks I’ve ever seen, finishing with walnuts, quince jelly and cheese.

Aside from this my colleagues were keen on pintxos, the local take on the more widely known tapas.

I stayed at the NH Aranzazu which was very nice, not particularly expensive and very convenient for the university but not so much for the town centre.