The London Underground – Can I walk it?

This last week I have been reading 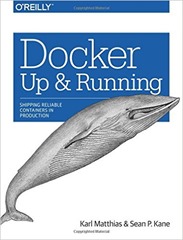 Docker Up & Running by Karl Matthias and Sean P. Kane, a newly published book on Docker – a container technology which is designed to simplify the process of application testing and deployment.

Docker is a very new product, first announced in March 2013, although it is based on older technologies. It has seen rapid uptake by a number of major web-based companies who have open-sourced their tooling for using Docker. We have been using Docker at ScraperWiki for some time, and our most recent projects use it in production. It addresses a common problem for which we have tried a number of technologies in search of a solution.

For a long time I have thought of Docker as providing some sort of cut down virtual machine, from this book I realise this is the wrong mindset – it is better to think of it as a “process wrapper”. The “Advanced Topics” chapter of this book explains how this is achieved technically. This makes Docker a much lighter weight, faster proposition than a virtual machine.

Docker is delivered as a single binary containing both client and server components. The client gives you the power to build Docker images and query the server which hosts the running Docker images. The client part of this system will run on Windows, Mac and Linux systems. The server will only run on Linux due to the specific Linux features that Docker utilises in doing its stuff. Mac and Windows users can use boot2docker to run a Docker server, boot2docker uses a minimal Linux virtual machine to run the server which removes some of the performance advantages of Docker but allows you to develop anywhere.

The problem Docker and containerisation are attempting to address is that of capturing the dependencies of an application and delivering them in a convenient package. It allows developers to produce an artefact, the Docker Image, which can be handed over to an operations team for deployment without to and froing to get all the dependencies and system requirements fixed.

Docker can also address the problem of a development team onboarding a new member who needs to get the application up and running on their own system in order to develop it. Previously such problems were addressed with a flotilla of technologies with varying strengths and weaknesses, things like Chef, Puppet, Salt, Juju, virtual machines. Working at ScraperWiki I saw each of these technologies causing some sort of pain. Docker may or may not take all this pain away but it certainly looks promising.

The Docker image is compiled from instructions in a Dockerfile which has directives to pull down a base operating system image from a registry, add files, run commands and set configuration. The “image” language is probably where my false impression of Docker as virtualisation comes from. Once we have made the Docker image there are commands to deploy and run it on a server, inspect any logging and do debugging of a running container.

Docker is not a “total” solution, it has nothing to say about triggering builds, or bringing up hardware or managing clusters of servers. At ScraperWiki we’ve been developing our own systems to do this which is clearly the approach that many others are taking.

Docker Up & Running is pretty good at laying out what it is you should do with Docker, rather than what you can do with Docker. For example the book makes clear that Docker is best suited to hosting applications which have no state. You can copy files into a Docker container to store data but then you’d need to work out how to preserve those files between instances. Docker containers are expected to be volatile – here today gone tomorrow or even here now, gone in a minute. The expectation is that you should preserve state outside of a container using environment variables, Amazon’s S3 service or a externally hosted database etc – depending on the size of the data. The material in the “Advanced Topics” chapter highlights the possible Docker runtime options (and then advises you not to use them unless you have very specific use cases). There are a couple of whole chapters on Docker in production systems.

If my intention was to use Docker “live and in anger” then I probably wouldn’t learn how to do so from this book since the the landscape is changing so fast. I might use it to identify what it is that I should do with Docker, rather than what I can do with Docker. For the application side of ScraperWiki’s business the use of Docker is obvious, for the data science side it is not so clear. For our data science work we make heavy use of Python’s virtualenv system which captures most of our dependencies without being opinionated about data (state).

The book has information in it up until at least the beginning of 2015. It is well worth reading as an introduction and overview of Docker.