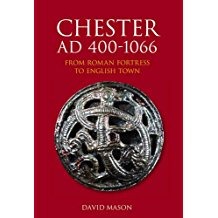 I couldn’t resist more Chester history, so now I am reading Chester AD400-1066: From Roman Fortress to English Town by David Mason. I’ve just read Jane Laughton’s book on late medieval Chester covering the period 1275-1520 (review here), and read David Mason’s book on Roman Chester (review here) towards the end of last year. This book fills most of the gap between those two books, but not quite.

Evidence for the early part of the period is sparse, particularly in the earlier years between about 400AD and 600AD – it isn’t known as the “Dark Ages” for nothing. During this time, after the Roman withdrawal, no durable mass-produced items such as coins or pottery were being produced. Elsewhere, in nearby Wroxeter, archaeological evidence suggests that the early Britons built wattle-and-daub huts within substantial Roman buildings. In Chester there is little such evidence. The various Roman buildings in Chester would have decayed at different rates. The baths under the now Grosvenor Shopping Centre had metre thick walls and would have only fallen down slowly, whilst the barracks in the north east quarter of the city were less substantial. At the barracks there are black deposits, possibly pigeon droppings, deposited between Roman and later date-able layers. It would seem that for most of the period from 400AD to 900AD Chester was a Roman ruin with some desultory farming and living taking place within its walls.

A little after this earliest period to 600AD there are are some written records, such as the Anglo-Saxon Chronicles, and Bede’s History which were written some time – dozens, even hundreds of years – after the event. There are songs and poems from Wales, transmitted orally, which refer to the period.

Chester enters the historical record of the period with the Battle of Chester in AD616, for which there is archaeological evidence in the form of a mass burial at Heronbridge, just south of the city. Here 120 skeletons were found dating to the same period as documentary evidence for the battle and with wounds consistent with dying in battle.

St John’s church, founded in 689AD sits next to the old Roman amphitheatre from whose remains it was built, although there is some suggestion that Christians were martyred at the amphitheatre, so it wasn’t simply a case of being unwilling to carry heavy stones further than necessary!

In common with the Roman period, and the later period covered by Laughton’s book Chester holds a key strategic position between Wales and Ireland on the one hand and the rest of England, variously inhabited by Dane’s and Anglo-Saxons on the other. I found some of the discussion here confusing with what I would refer to as “Celts” from Wales, the West Country, Scotland and Ireland described as “British” and those from Mercia and Wessex as “English”.

The final third or so of the book is devoted to Chester as a burh one of the network of fortified towns set up by King Alfred – Chester was established in 907AD. It’s at this point that Chester appears to turn into a proper town, and a moderately important one at that. In the years after its establishment as a burh Chester had “moneyers” – effectively a mint, twice the size of London. This is reflected in the discovery of coins minted in Chester being found in Ireland and around the Irish Sea. The establishment of the burh mandated taxation and physical labour to build its defences and bridges – it’s likely in this period that the modern circuit of the walls was constructed. There is more archaeological evidence from this period and the start of some form of systematic written records, rather than the non-contemporaneous writing alluding to previous periods.

It is during the period after the establishment of the burh that King Edgar holds his coronation in the city, in 973AD. By the time of the Norman conquest and subsequent Domesday census Chester had 431 houses and a further 56 belonging to the Bishop (presumably of St. Werburgh’s church which was founded by in Edgar in 758AD). It also had a system of laws and taxation detailed in the Domesday book.

The book ends with Chester suffering a setback in the years after the Norman conquest as a result of its part in rebellion against the incoming King William.

Chester AD400-1066 is a fairly slender volume but more readable than Roman Chester. As a result of the sparsity of the archaeological and written records for the period it is wider in its scope than books set before and after this period.