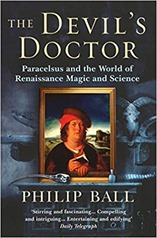 The Devil’s Doctor by Philip Ball is a biography of Paracelsus, and a view of Renaissance magic and science. Paracelsus, who lived from 1493 to 1541 was a contemporary of figures such as Copernicus (1473-1543) and Vesalius (1514-1564), who preceded closely William Harvey, William Gilbert,Galileo and Francis Bacon.

Each chapter says something about Paracelsus and something about the time in which he lived. So we start with his early life growing up in a small town in Switzerland, his father a physician. Before moving on to a town in what is now Austria, where his father worked as a teacher in a mining school. The aside here is on the early mining industry, in this case in the Austrian Tyrol, dominated by the entertainingly named Fugger family who had gained their pre-eminent position by lending money to the nobility with silver mines as collateral.

Mining, or rather the refining of ores into metal is a “scientific” process, mixtures of seemingly unpromisingly materials are heated and, as if by magic, a shiny and valuable metal appears. In the 16th century we would not recognise the theories by which the refining process was rationalised but they highlight the importance of understanding what was to become chemistry for profit.

What’s notable about these two chapters is that one can easily see how Paracelsus started learning early. Subsequent chapters cover Paracelsus’s own education as a physician, although it is not clear whether he ever “qualified”, and a tour of Europe chased by war.

Paracelsus was a contemporary of Martin Luther and on the face of it they and something in common in their desire to overthrow the status quo. However, Luther was very focussed on solving what he saw to be the shortcomings of the administrative side of the Catholic church. Fundamentally, he wasn’t interested in science and its reform away from the scholastic creed. Luther’s view was that God was Divine and had no need to construct a Creation amenable to scientific understanding.

Paracelsus was interested in overthrowing the status quo, particularly in medicine. To that point medicine was largely about following the teachings of the ancient Greeks whose surviving medical practice was based on the four humours. Medicine was about substances and processes to correct imbalances in the humours which arose in specific diseases. Paracelsus emphasised practical study and observation rather than cleaving to these old theoretical models for medicine. He advised seeking out folk remedies specific to places, believing that diseases and their cures were localised. So his world view was something akin to our own but not exactly so, he represents a transitional state. He also counselled only undertaking minimal surgery – exceedingly wise advice at the time.

Paracelsus’s study of “chemistry” went hand in hand with his medical work. He experimented to make medicines extracting chemicals from natural sources, combining them with other materials. At the time this type of work was usually tied up with alchemy, which was interested in turning base materials into gold and elixirs for eternal life. Alchemy was part chemistry and part mysticism and secrets. Paracelsus practicised each of these elements although it seems he was less enamoured of the secretive side. His alchemical writings were more straightforward than some of his contemporaries and predecessors. The theoretical underpinnings he provided for his work seem bizarre to us but chemistry is a difficult thing. It took hundreds of years to reach the point at which we are now and Paracelsus came early in that time.

Local man (to me) Robert of Chester gets a mention as a translator of alchemical texts. Authorship seemed a fluid concept in the early period with some people attributing their work to more renowned writers – difficult to disentangle after so many years.

For the chemists amongst us, it seems that Paracelsus discovered diethyl ether whilst trying to make sulphuric acid palatable by mixing it with wine. It is mindboggling that sulphuric acid was used as a medicine!

Many of the chapters end with Paracelsus having fled a city, typically because he had offended one authority or another. He was certainly cantankerous, it is difficult to say whether he was personally unpleasant. The way he practiced medicine was, to a degree, out of tune with the times and seemed more caring than his contemporaries. I was struck by how well documented Paracelsus’s life seemed to be, perhaps this is partly a result of his peripatetic nature.

The book finishes with a couple of chapters set after Paracelsus’s death, the first of these looks at how his writings were collected and published after his death by a band of supporters, and how a weaker band of opponents also wrote about him. This conflict probably also contributed to the relatively high level of documentation for his life. The final chapter looks at his longer term impact, this is a mixed picture. Unlike Copernicus, Vesalius, Harvey and the like he did not leave discoveries which are valid today. Rather his methodology informed the changes that were to take place in the 17th century.