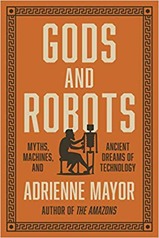 This is a review of Gods and Robots:Myths, Machines, and Ancient Dreams of Technology by Adrienne Mayor. The book is about myths from mainly ancient Greece, and how they relate to modern technology. Material from the Etruscans, and to a lesser extent Indians, Chinese and Romans play a part.

The central characters in the book are Talos, Medea, Daedalus, Hephaestus, Pandora, Prometheus with a small part for Pygmalion.

Talos was an animated bronze statue, made by Hephaestus – the god of the forge, to guard the island of Crete. He appears in a number of stories but most notably in that of Jason and the Argonauts. He is killed by Medea, who promises him eternal life but instead kills him by removing a bolt from his ankle which releases the vital fluid that fills his body. Talos appears in mythology in the 5th century BC. Medea is a witch who offers Pelias eternal life but instead tricks his children into killing him.

Prometheus was one of the mythical Titans, and was responsible for creating humans, and giving them fire – for which he was punished by Zeus. Depictions of his act of creation vary, with earlier representations showing him manufacturing humans in the way one might assemble an automata whereas later representations show him animating human figures.

On my first reading Daedalus appeared to be a semi-mythical character, that’s to say a historical figure whose actions were extended in the telling. However reading more widely it seems he was mythical. His actions, designing the labyrinth for King Minos, making wings for himself and Icarus to escape the King and making highly realistic statues are on the boundaries of the possible.

Pandora was constructed by Hephaestus at Zeus’s direction to bring evil to the world. Again she is a constructed being, and representations of her show her as being different from other figures with something of an “uncanny valley” look to her. Pygmalion carved a statue of a beautiful woman which Aphrodite brought to life. I was intrigued to discover that the self-propelled mops and buckets in Disney’s Fantasia have antecedents in Goethe in the late 18th century and Lucian of Samosata in 150AD.

Bronze statuary seem to be a recurring theme in the book, for the period when these myths arose bronze was seen as an almost magical metal. Artisans had learnt the lost wax process for casting which enabled them to create hyper-realistic statues of people and animals. In myth these bronze statues were associated with heat, Talos kills his victims by crushing them in a burning embrace, Hephaestus’s Colchis bulls were made from bronze and had burning skin.

Another theme of the book is immortality, something that mortals seek to gain from the gods. Reflected today in modern life extension research.

The Greek mythology I know I believe I learnt as a fairly young child from films like Jason and the Argonauts (cited in this book), and I think the book of the Clash of the Titans film amongst other modern reproductions of these tales. What is missing from this education is an appreciation that the characters in these stories are not singular, in the historical record there are multiple versions of each character stretching back over many hundreds of years.

As someone with no classical training I am very curious as to how the stories in this book reach us. As I understand the earliest original writing on paper is something like 1500 years old which leaves a thousand or so years back to some of the stories in this book. Mary Beard’s book SPQR touches on this briefly. Gods and Robots does not explicitly address this question, it shows us pictures of ancient vases and talks about works that have been lost but are recorded by later writers but does not join the dots.

What do these antecedents to robots in ancient myths mean to us today? Perhaps the striking thing is that the robots we see in cinema dating from the early 20th century, and being realised now, have precursors dating back thousands of years. We have been imagining robots for a very long time similarly we have been imagining life extension for a very long time. However, machines for computation and factories do not figure in this book. The Antikythera mechanism makes a brief appearance – it dates from something like 100BC – but it is more an illustration of how sophisticated Greek artisans had become. In some ways the striking thing about the Antikythera mechanism is its uniqueness, it is the only device of its type from this period and we don’t even see simpler devices as far as I am aware.

The book finishes with some instances of mythological devices appearing in real (ancient) life. It has to be said that a number of these are of a gruesome nature, more than one tyrant took pleasure in forcing people to jump from great heights with Daedalus-like wings leading to their death. Phalaris used a bronze bull to roast people alive.

This is a fairly short book, I think the main thing it leaves me with is a desire to know more about the myths of the ancient world have reached us rather than the central topic of the book.