Type annotations in Python, an adventure with Visual Studio Code and Pylance 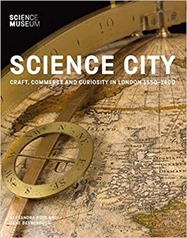 On Twitter I hang out with a load of historians of science, and this has lead me to Science City: Craft, Commerce and Curiosity in London 1550-1800 by Alexandra Rose and Jane Desborough. This is an edited volume which accompanies the new Linbury Gallery at the Science Museum, combining objects from the Science Museum, King George III collection and the Royal Society. This book touches on many of the books I’ve read previously on the Board of Longitude, the transit of Venus, surveying and map making.

The main part of the book is four roughly chronological chapters covering the development of an instrument making industry in London, the Royal Society, public displays of science, and global expeditions. At the beginning of the period covered by the book, 1550, London was not a particularly notable city – it was a quarter the size of Paris and only twice the size of Norwich – England’s second city at the time. It had no universities, in fact it wasn’t to have a university until 1826.

The instrument trade in London started with a need to fulfil the requirement for “mathematical instruments” for surveying, gunnery and architecture. It was boosted by immigrants from the Low Countries fleeing persecution. In 1571 5% of the London population were “strangers” – born outside of England. These immigrants were not unwelcome, foreign manufactured goods were often seen as better quality which caused some resentment in the Guilds. Skills were developed and maintained by apprenticeships. These were typically found by personal contacts in the 16th century, there was no advertising of positions. Science City traces some apprenticeship “lineages”. In the early days there was no specific Guild for instrument making.

The second chapter brings in the Royal Society founded in 1666. As well as the instrumental needs of Robert Hooke, its Curator of Experiments, it stimulated a wider trade in instruments. The members of the Royal Society were keen to replicate experiments, or do their own experiments to share with the Society (or at least keen enough to spend money on instruments). Variants of the air pump demonstrations Hooke did were still being done 40 years later. The Royal Society put London at the centre of a network of scientific correspondents, and to some degree defined the way to be a scientist that maintains to this day.

In the ensuing years public science became a popular entertainment. Popularisers of science needed instruments to ply their trade. By this point in the first half of the 18th century there are 300 instrument makers in London, their business is divided into mathematical instruments (theodolites, sextants and the like), optical instruments (microscopes and telescopes) and philosophical instruments (those used to demonstrate physical principles). Its interesting to see the birth of branding at this point, makers were known by their shops signs and for clarity they would typically use a consistent image across there pamphlets and shopfront (rather than simply words). Examples include Benjamin Martin’s “spectacle” logo, and Edward Culpeper’s crossed daggers.

The final chapter covers the second half of the 18th century, this is at a time where the Ordnance Survey is founded alongside triangulation surveys with France. The chapter speaks to the global reach of London in trade and in science. This is the time of the Board of Longitude which was founded, making its major awards to John Harrison for his chronometer in the second half of the 18th century. The expeditions to view the transit of Venus in 1769 were also significant – the Royal Society petitioned the King to fund an expedition to Tahiti, this was accompanied by other expeditions which led to a requirement for moderately standardised instrumentation to make the measurements. London was able to supply this demand.

Science City finishes with interviews with an instrument maker (Joanna Migdal), the President of the Royal Society and the Lord Mayor of London (also a trustee of the Science Museum). The first of these I found really interesting I wish there were photos of the sundials the interviewee made, you can find some here on their website. Migdal’s work, individual, handcrafted items, is probably in the character of the instrument making of this book but differs from the typical instrument ecosystems these days.

The book is rather smaller than I expected but it is beautifully illustrated, more a bedside table than a coffee table book. I enjoy these catalogues of museum exhibitions more than the exhibitions themselves. In the gallery you are pushed for time and space, reading the descriptions can be difficult cross-referencing to other things you have read is impractical. A book makes it a more comfortable process but just lacks the immediacy of seeing the objects “in-person”.