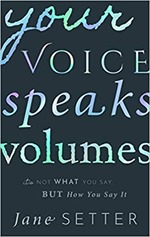 I have a habit of reading the books written by people I follow on Twitter, Your voice speaks volumes by Jane Setter falls into that category. It is a book about how we speak (if we speak English, and largely if we are British).

Your voice is divided into seven chapters which cover seven separate themes.

It starts with a description of the mechanics of speech, and how we annotate sounds. I particularly like the chart of when children typically manage to produce different sounds, the earliest part of English come between 18 months and two years of age, with the last appearing between 5 and 8. I dutifully touched my larynx to feel the difference between the voiceless /s/ and the voiced /z/. Setter underestimates my ignorance by not explaining the difference between vowels and constants – I can tell you which letters are vowels but not why those letters are vowels.

The second chapter on accents is the one I found most fascinating, it turns out that certain features of accents follow the lines of the Anglo-Saxon occupation of Britain. So called rhotic, and non-rhotic pronunciation. Coming from the West Country my accent is probably a bit rhotic – I pronounce r’s more strongly. It is interesting to see accents cross a thousand years. This chapter also talks about how we are judged by our accents, a recurring theme is that women are more often criticised for their voices.

Chapter three talks about how we make judgements of a person based on the basis of how they speak, and how we might try to change those perceptions. Here we get an anecdote about Setter’s partner at university who had a masculine voice that did not match his slight physique! As in the previous chapter it is women who get the brunt of criticism for being perceived to have changed their voices. Men struggle to change their voices to sound more masculine/sexy – this is probably an evolutionary side effect – a voice indication of fitness that could be faked would not be very helpful. Included in this chapter are “uptalk” and vocal fry, uptalk is lifting the intonation at the end of a sentence. Uptalk I understand, I always associate it with Australians. Vocal fry is probably best understood by search youtube, it makes me think of Britney Spears.

I was shocked to discover that actors are still expected to have “received pronunciation RP” as their default voice and the ability to do General American as a “second language”. This is reflected in newsreaders where accents are largely notable by their absence. The chapter starts with some comments about Alesha Dixon singing “God Save the Queen”, she was criticised, purportedly, for Americanising her pronunciation by certain sections of the press. Setter highlights that Dixon’s pronunciation is only slightly Americanised and is most likely as a result of background in R&B music. It is an unwritten rule that different styles of music conventionally are sung in different accents, Country music and R&B “sound” better with an American accent. Hence bands like The Rolling Stones often have vocals with a hint of an American accent. Singing is a performance, rather than speech and so singers tend to learn a song, accent and all rather than sing with their speaking voice.

The chapter on forensic speaker analysis, based on Setters work in court this divides into auditory analysis, done with the ear, focused on the larger scale features of the voice and acoustic analysis which is done using software and looks at the frequency spectrum. It was interesting to learn how voice line-ups are constructed. The message of this chapter is that voice matches tend are indicative rather than absolute, analysis can show that two voice recordings could be from the same speaker but not confirm that fact.

The penultimate chapter talks about the importance of voice to the transgender community, to a degree trans men have an easier job, taking testerone leads to a natural lowering of the voice but the same is not true in reverse for trans women. Although pitch is the primary discriminating feature between male and female voices, it is not the only one.

The book finishes with a chapter on English as a second language. Setter has worked with call centre staff from India to help them provide a better service. Some of the complaints about such call centre staff boil down simply to customers not wanting to speak to foreigners. But in other cases the way in which English is spoken in England and India leads to misunderstanding in the manner of a conversation. What to an Indian English speaker is normal may sound like annoyance or frustration to an Indian speaker which makes me think of The Culture Map by Erin Meyer.

Your voice is written in quite a chatty style with a number of anecdotes to move the story along. It provides a useful overview of at least part of the work of a phonetician. The accompanying web page is a bit sparse (here) but includes a PDF of the introduction, so you can try before you buy. Your voice is endorsed by David Crystal whose books on the English language I feel I grew up on – to be honest I was pleased to discover he was still alive!