Book Review: History of Britain in Maps by Philip Parker 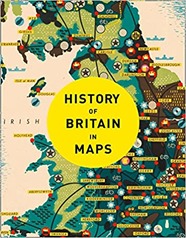 I’ve always been a fan of maps, so the History of Britain in Maps by Philip Parker is right up my street.

The book is ordered chronologically with each map getting a short page of text facing a page of the map, with some maps earning an additional double page spread. Except for the earliest periods the maps are contemporary.

The book has the air of written as a set of separate map captions with some repetition between maps relating to the same period.

There are some recurring themes through the book, maps for the pleasure of maps seem to play a role, as do military maps showing defensive positions or explaining military actions. Maps of ownership are also common. Finally there are maps for travel, first by road and then later by canal and railway. Also apparent is the evolution of mapmaking skills.

Aside from the exceedingly schematic representations of Britain on the Roman Rudge Cup from 130AD the earliest maps of Britain date to the medieval period and Matthew Paris, a Benedictine monk who was active around 1250AD. There are religious Mappa Mundi from slightly earlier but Britain is very much on the edge of these schematic representations of the religious world with Britain perched at the very edge, if visible at all.

The earliest map of Britain that looks like a map is Matthew Paris’s map of 1250AD. The shape of coast is heavily distorted but some names recognisable to the modern eye appear (such as my home county of Dorset). Rivers are prominent most likely because they were the key method of transport over longer distances. There is a strand of maps that portrays the nations of the British Isles, the counties within them and cities, particularly London which are about place, belonging and power rather than navigation or even defence. Towards the end of the 16th century such maps start to look very much like modern maps, they are relatively accurate and follow modern mapping conventions (rather than being panoramic views or schematic views).

Also produced by Paris is an "itinerary map" showing the progression of towns a pilgrim to the Holy Land would pass through on their trip from Britain. This type of map is a recurring theme through the book, it is not interested in the details of the landscape, it is not a plan view, it is a linear track with distances. This is highly relevant to the traveller who is constrained to travel along the roads rather than view the landscape from above, as a bird does. In some respects this path turns full circle with Beck’s highly schematic but very clear London Underground map.I was interested to learn that road signage was not introduced until 1696.

Although there are earlier examples of coastal maps Henry VIII’s dissolution of the monasteries in the 16th century which led to open season being declared on Britain by the Pope, produced a number of coastal maps of the South of England. These are a recurring theme. The monarch, and his counterparts in Europe, were both keen to map the defences of the South Coast. Similar maps were produced during the Napoleonic Wars and the Second World War. Also falling into the military remit are the various maps of military engagements of the Civil War. The earliest work of what was to become the Ordnance Survey in Scotland in the mid-18th century and then in Kent related to military interests (the clue is in the name).

Maps of ownership are another recurring theme, these start in the early 15th century typically establish the land and rights of the monasteries. Later maps, in the early 19th century, show the results of the Enclosure Acts which took from Common land from everyone and gave to the wealthy now-landowners. Similarly the tithe system whereby a tenth of the produce of an area was owed to the parish was converted to a land taxing system where money was given instead.

There are the 19th century "social" maps of cholera by Jon Snow’s, deprivation by Charles Booth and the census of 1841 by August Petermann. Fi

The book ends with a map of the votes cast in the 2016 EU referendum, a bitter topic as I write in January 2021.

Obviously as a fan of maps, I enjoyed this book. It is a nice skim through British history if you don’t want anything too heavy going, it is also a good overview of what types of maps people were making and when. I’d seen quite a few of the maps shown in other books, you can get a flavour of these here on the maps tag of my blog.