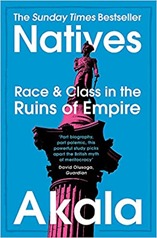 A return to the Black Lives Matter theme with Natives by Akala. Natives is an autobiography which illustrates many of the points made in Why I am no longer talking to white people by Reni Eddo-Lodge and Black and British by David Olusoga. Akala highlights that his working class origins are as much an issue as his race.

Akala is a rapper, poet, journalist, songwriter, author and activist – see their wikipedia page here. I don’t know what the etiquette is for using someone’s "birth name" when they publish under a pen name. Although I had not heard of Akala previously, I am familiar with the work of his older sister Ms Dynamite.

Akala has a white Scottish-German mother and a black Jamaican father. He grew up in Camden in the late Eighties. As he points out this is as some of the overt racism in Britain, which his fathers generation had experienced, had started to recede. He went to Jamaica once as a child but subsequently has visited many times. Alongside Black America, Jamaica and Shakespeare are his major cultural influences. He visited also visited the family in the Outer Hebrides, finding Scotland less racist than England.

He clearly remembers the occasion on which he realised that his mother was white, talking about coming home school having been racially abused at the age of five by another child. For racists there is no mixed-race, no being a little bit Black – for them it is all or nothing. This is reflected in the South African apartheid era laws. So although Akala is mixed-race this is pretty much meaningless since he is considered Black by the white world. Interestingly there are gradations in the Black community where in the Caribbean the paler skinned are seen as a higher social class (I think the same may be true in India), and in South Africa being successful is "acting the white man". At secondary school a teacher once stated to him in an argument that "The Ku Klux Klan stopped crime by killing black people" – this incident gets a whole chapter, you perhaps won’t be surprised that there were no adverse consequences for the teacher.

As a child Akala was academically gifted, going to various extra classes and a pan-African school at the weekend. This was a result of his mother’s drive but does not seem to have been uncommon for Black families.

I think the thing that really hit me was that when my (white, middle-class) son, aged 9, demonstrates his academic ability we get an email from his teacher praising him. When Akala achieved academically at school he was criticised (and was actually in a special needs class at one point). A recent incident with a friend of ours suggests this attitude for children who are not white has not completely gone from the teaching profession.

Despite these academic talents he still fell into something of the gang culture for a period, as he describes it he simply snapped out of it at the age of about 25 – something he says is typical. His less fortune cohort were either imprisoned or killed by this point. This is an odd juxtaposition of someone who has friends who are classical music composers and hospital consultants, but at the same time know people who are in prison or have been killed in street violence.

Why was Akala and his cohort susceptible to gang culture? He sees it as a working class problem, rather than a race problem – citing the high levels of gang violence elsewhere in the UK where the black population is small. A second factor is the utter distrust of the police in the black community, driven by years of prejudice. They simply don’t see the police as there for them (with pretty good reason).

You can see this happening today in the UK. There is a steady stream of stories in the press of successful black people stopped in their cars (car not registered here, this car looks too expensive for you to own it), and stopped in the street (crime by a man matching your description). As a middle aged white man I don’t get stopped by the police because I don’t look right.

Tony Blair was happy to talk about "black on black" violence, although he would never describe violence in Northern Ireland or in Glasgow or Newcastle as white on white violence.  In fact I was surprised to learn that violence in Glasgow is a bigger problem than in London but the media like to report the violence in London and imply it is about the black population. The Labour party are happy to talk about the difficulties of "white working class boys" ignoring the fact that this is largely down to class not colour.

Akala talks a bit about South Africa and Cuba, it’s interesting the emphasis that he puts on the role of Cuba in ending apartheid with their military support against the South African regime in neighbouring countries. Overall his view of Cuba is more positive than mine. I think I have been corrupted by 50 years of anti-Castro propaganda. On Mandela and the ANC he is not quite so positive as your average middle-aged white man.

I found Natives a useful complement to Black and British by David Olusoga and Why I’m no longer talking to white people about race by Reni Eddo-Lodge because it talks of the individual impacts of what these other books described in a more abstract way.