Book review: Railways and The Raj by Christian Wolmar

A way of working: data science 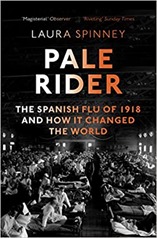 Pale Rider: The Spanish Flu and How it Changed the World by Laura Spinney is obviously very topical at the moment, it was published in June 2017 which makes it more striking how relevant it is than if it had been published in the last two years.

The book starts with an overall chronology of the 1918 flu pandemic before return to specific themes, generally through the medium of personal accounts or individual incidents. It is worth highlighting that the "Spanish" label is highly misleading, essentially the 1918 flu pandemic arose somewhere between the American mid-West, Northern France on the battle fields of the First World War or, a remote possibility, in China. Spinney discusses the link with viruses found in wildlife and livestock.

Initial estimates as to the death toll of the 1918 flu pandemic were around 25 million but these have been revised upwards recently to up to 100 million. Furthermore, the 1918 flu pandemic largely took place over September to December in 1918 with smaller waves in the spring of 1918 and in the following spring and with there were some variations by geography as to exactly when the worst effects were felt. So 1918 flu pandemic was a shorter, more devastating pandemic than the 2020 covid pandemic (which has killed around 3 million of a much large population). This was against the back drop of the First World War which killed more people in Europe than the pandemic, although around the world Europe was the exception with more killed by pandemic in all other continents.

The context for the 1918 flu pandemic was different too, the 19th century had been one of epidemics driven by industrialisation and the associated urbanisation. Amongst those were flu pandemics and 1830 and 1890. The 1890 "Russian" flu pandemic, was the first to be measured as a pandemic. The 1918 pandemic was at a time when the germ theory of disease was being developed, and the value of hygiene was understood. However, viral diseases were not well understood and it was not until the 1930s that the mechanism of transmission for flu was discovered with the first flu vaccines coming in 1936. It was not until the 1950s that it was confirmed as a viral disease. The symptoms of this flu pandemic were quite different from those of the covid pandemic with a mahogany colouration forming on the cheekbones that spread progressively until death, teeth and hair falling out and delirium (leading to suicide).

The health measures taken to address the 1918 pandemic were not that different from those used recently with sanitary cordons and quarantine used extensively. Religious ceremonies were exempt from restrictions in Spain leading to more cases. Closing schools was argued over with those in favour seeing schools as better for the monitoring of outbreaks, communication of health information, and offering better sanitary conditions, and food, to children. Starvation was a problem with supply chains effected from start to finish.

It is interesting to see the varying responses of Australia and New Zealand between the 1918 pandemic and the covid pandemic, Australia isolated in 1918, as it did in the covid pandemic but in 1918 they did not. The disproportionate impacts of the 1918 pandemic were also in evidence, with the recent Italian immigrants to the US, India and remote native American communities in Alaska very badly effected with mortality rates of up to 40%.

The pandemic had arguable impacts in world affairs, Woodrow Wilson had a serious stroke probably as a result of a bout of flu, and was not present to limit the war reparations against Germany.The independence movement in India grew. The flu impacted people in their twenties and thirties quite heavily, leaving behind a generation of orphans – their treatment was handled with new legislation by France and England. There was a post-pandemic (and war) fertility boom.

Despite the enormous death toll, even compared to the First World War, the 1918 pandemic appeared to have little impact on art and literature although scholars will look for signs of post-viral fatigue in paintings. Spinney argues this is because insufficient time has passed, noting that there are approaching 80,000 books on the First World War and but only 400 on the 1918 pandemic – but this number is growing rapidly. It has made me wonder about the lost siblings, in my grandparents generation which were never spoken of – similarly the absence of stories from fighting age men of the Second World War. Essentially these stories were too painful to handle at a human, personal level and the culture in the UK at least would not have been to speak about them. So it is left to historians and the passage of time for the stories to come to light.

A second factor, proposed by psychologists, is that pandemics lack a good story line with a clear beginning and end and a selection of heroes – unlike the First World War.

The Pale Rider is very readable, it is difficult to use the word "enjoy" regarding a book which tells of the deaths of 100 million people. I was struck by how relevant the 1918 flu pandemic was to our current situation with the disparate impacts depending on country and social conditions, the debates over school closures, the dedication of medical staff, the measures to address the pandemic and the debates over the compliance with public health measures. The covid pandemic is different – it has played out over a longer period, it has a far lower death toll, our medical knowledge is much improved, our world is much more connected but nevertheless The Pale Rider feels very prescient.