This post is in memory of my paternal grandmother: Dorothy Hopkinson. This isn’t going to be a maudlin post: granny died about 18 months ago at a fair old age. I remember her for her cheery smile, ultra-competitive playing of cards and Scrabble (whilst simultaneously claiming to be unconcerned by the outcome), her white drop-handlebar bike which she rode into her sixties, spectacles at a jaunty angle as she slept: snoring in front of the TV, icecream made from evaporated milk in battered aluminium dishes and nettle soup. When she died she left some money which I used to buy a direct water heating solar panel which I have christened “The Dorothy Hopkinson Memorial Solar Panel”.

So to the panel: bought from Solartwin it cost about £3000, it comprises a single panel about 6ft by 4ft which is on our roof. Installation was in September 2008, took about four hours and is minimally invasive. The panel takes cold water as it is heading towards the hot water tank, circulates it around the panel (as long as it’s sunny) heating it as it goes, then feeds it back into the top of the hot water tank. Our roof isn’t ideally oriented, it faces west rather than south, so it catches the afternoon sun. There’s only two of us in the house, we use gas for heating, hot water and cooking – so the solar panel is replacing some of that water heating. Our gas bills are already pretty low (~£360 per year). At the same time that we had the solar panel installed we added to our loft insulation and also significantly improved the insulation on the hot water tank (previously it had a flimsy red jacket, worn off the shoulder). As a side note, I found the rolls of loft insulation from B&Q to be rather huggable ;-)

I have, of course, been recording my gas and electric readings every Saturday morning for the last couple of years. Okay, I appreciate most people don’t consider this “natural” but it isn’t hurting anyone and it does give me some nice numbers to play with. Obsessive data collection has a fine track record in science: Tycho Brahe for example spent years collecting data on planetary orbits, Nevil Maskelyne collected data for determining the longitude from the location of the moon, J.D. Bernal’s poor lab technician spent what must have been an incredible amount of time fishing balls out of a bag, recording their exact location as he went (that’s more data collection by proxy) (these are just the ones I can remember off the top of my head). Of course computers and electronics have meant that a lot of data collection can be automated but there’s still a place for a bit of tedious manual data collection in the modern lab (or home). Feel free to add to tales of heroic data collection in the comments.

I give the gas and electricity numbers to a little program I wrote in C# (a relatively new programming language), which plots them out. I used C# as a little exercise to get me using the language – normally I use Matlab (which is a language environment more suited to scientific programming).

Making graphs with numbers comes very naturally to me, and I find it very easy to read a graph. But I observe when we go walking that I’m much happier reading an OS map than my wife who prefers words in a guide book – so I’m not sure everyone reads a graph in the way I do. Perhaps you’d like to comment? 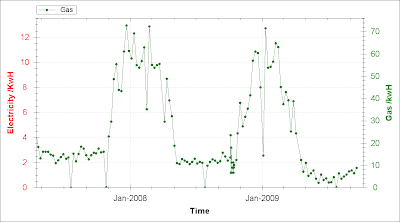 So in the graph above, time runs along the bottom axis from left to right, the gas used in a week runs in the vertical direction. The mountainous bits are the winters, when the central heating is switched on. The relatively flat bits in between are the summers. First thing that strikes you is that the amount of gas used for central heating in the winter is huge (about ten times more) compared to the amount used just to heat water, during the summer. The solar panel was installed in September 2008 (almost a year ago),  over the winter it probably had relatively little effect, although looking at the raw numbers gas usage over Winter 2008/09 was about 20% lower than Winter 2007/8 despite this year being a colder winter. This is probably due to the improved insulation installed at the same time, we went from about 10cm thickness to about 25cm thickness. In the summer the reduction in gas usage is pretty large – down by 55%. Through this summer you can see that the gas usage drops gently to a minimum around June, this is due to the increasing height of the sun in the sky and the lengthening day.

Was the panel worth it? Well, it is quite exciting seeing your water getting heated for “free”, and during the summer months (even a relatively poor summer) we used a lot less gas. In financial terms the payback time for us is very long, although with a larger household and larger hot water tank the pay-off time would be reasonable (i.e. <10 years). Personally, I think the financial argument is missing the point, if we only change our behaviour for short term financial benefit we will all steam, gently over the next 100 years or so.