Book Review: The History of Clocks & Watches by Eric Bruton 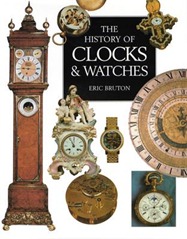 Earlier, it was telescopes, now I’m on to clocks! Here I review Eric Bruton’s book “The History of Clocks & Watches”. I came to it via an edition of the Radio 4 programme “In Our Time” on the measurement of time (here). The book was originally published in 1979, the edition I read was from 2002. I mention this because there is some evidence that the text has not been fully updated.

The book starts with a slightly cursory look at the use of the sun to measure time, and mentions briefly the use of candles. The first mechanical clocks were based on water, and in Europe were used as timekeepers in monastic communities. No direct physical evidence appears to remain for these clocks, although there are detailed descriptions in books from the time such as Su Sung’s 1092 “New Design for a (Mechanised) Armillary (sphere) and (celestial) globe”. They appear to have been used widely in ancient times. The sandglass, superior to the water clock because of the flow properties of sand when compared to water, first appears in illustrations in 1337.

“Clockwork” clocks started to appear started to towards the end of the 13th century, they were found in monasteries to call the monks to prayer. The key components of a clock are a mechanical oscillator, initially a bar with weights at the end know as a foliot, an “escapement” to allow motion coupled to the mechanical oscillator to work a display and a driving force to keep the oscillator going. In these early clocks falling weights provided the driving force. The first escapements were known as “verge escapements” and were in use until 1800, several hundred years after they were introduced. In fact it took an awfully long time for mechanical clockwork to replace solar clocks. Improvements to timepieces are in the quality of the mechanical oscillator: making it insensitive to pressure and temperature, and making sure the driving force and display train interferes minimally with the going of the oscillator.

The first spring driven clocks appeared around 1430, the spring enables a rather more compact clock but the problem is the power it generates varies with how far it is unwound, this problem was addressed using a fusee which moderates the output power, apparently adapted from siege engines where it is used in reverse to enable men to wind up catapult style devices. Another trick is to use the spring only in a small part of its unwinding.

It was not until 1657 that Christiaan Huygens introduced the pendulum as the oscillator for clocks, which produces a big improvement in accuracy – it actually becomes relevant for a timepiece to have a minute hand. Huygens made repeated contributions to the development of the clock, although he had a clockmaker implement his ideas in much the same manner as Robert Hooke had Thomas Tompion implement his ideas.

5 The Time at sea

As early as 1598 Philip III of Spain had offered a reward for a method to find the longitude, it was a well-recognised problem well before the Board of Longitude was created in England to provide a prize for its solution. John Harrison and his marine chronometers for determining the longitude are covered in some detail, extending beyond his life to cover the developments of other clockmakers including John Arnold, Thomas Mudge, Thomas Earnshaw and Pierre Le Roy. Harrison is famous for his dispute with Nevil Maskelyne, the Astronomer Royal, and something of an embodiment of the Board of Longitude that funded his work but it seems that clockmakers of the time were disputatious with each other and the Board.

The fields of astronomy and timekeeping are tied together, many early clocks went to great lengths to show astronomical information such as the phases of the moon. Even in the 20th century the most precise mechanical clocks were made for astronomical use, in the past Thomas Tompion was renowned for his precision timepieces supplied to the Royal Observatory. Whilst Christiaan Huygens made revolutionary advances in both clock design and telescopes. There is a relationship between dividing a quadrant, a device for measuring angles in astronomy, accurately into increments and dividing the gear wheels of a clock accurately to position the teeth.

6 The development of the watch

Personal timepieces date from the late 15th century, in fact prior to this people carried personal sundials or even used themselves as the pointer in a simple sun clock. The challenge with a watch is to produce a compact timepiece, meaning small parts, which is robust to the forces that being carried around all the time exert. I have to say here that the watches that Abraham-Louis Breuguet made at the end of the 18th century are absolutely gorgeous (see here, for example).

I found it surprising the degree of precision achieved in the pre-Industrial age in the manufacture of timepieces, but then I also found pre-Industrial lens grinding semi-miraculous. This probably says more about me then anything else but perhaps the message is that bespoke precision pre-dated the Industrial Revolution whose strength was in standardising components, introducing continuous workflows and making use of less skilled labour. At points in time specific areas of England, France, Germany, Switzerland and the US were predominant centres of manufacture with the US leading the way in mass production but the Swiss picking it up in Europe.

The 19th century saw the arrival of trains and telegraph, these bring the need to standardise time and the means to do it. Scheduling of trains means that standardising time is to some degree a safety issue, the adoption of time zones in the US in 1876 was also driven by the railways. The adoption of Greenwich Mean Time occurred in 1880, the Greenwich Observatory had been providing a time single in the form of a dropping ball since 1833. The telegraph enabled such time signals to be distributed more broadly, and used automatically. Electricity was also incorporated in the running of the clock, the 1921 Synchronome electromechanical clock providing the ultimate in accuracy until the introduction of quartz and atomic timekeepers.

9 Watches for the people

The final part of the book covers the reduction of cost to mass produce watches which all could afford, this process includes simplifying the mechanisms and sacrificing accuracy where possible. It highlights the development of digital watches in the 1970s where the prevailing mechanism for testing the quality of electronic components was to sell them and see how many were returned!

For my own amusement I present the following table which presents the accuracy of various landmark timepieces in standardised form, the first two entries are from this wikipedia article whilst the remainder are from the book:

Coincidently the improvement in accuracy for successive entries in this table is 100-fold.

The book is heavily illustrated with pictures of timepieces, diagrams of mechanisms and engravings of workshops. I rather like this, but in places it feels like you’ve seen an image before in relation to an earlier section of the book. Although the book is logically arranged, in fact I borrowed the logic to structure this post, the presentation of how clock mechanisms work is disjoint, and scattered throughout the book.

My follow on reading from this book is on Christiaan Huygens, he isn’t a central character here but he just turns up in so many different places!