Not Waving but Drowning

I thought I’d write a little post about Google Wave, and more generally the uptake of new software. 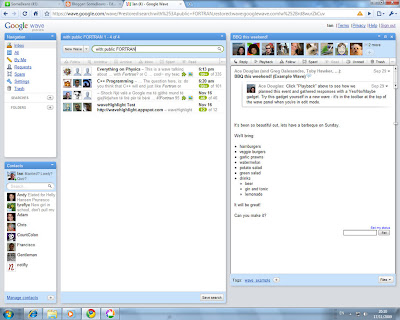 So, broadly it looks like an e-mail client. I won’t describe the details here but you can get a better idea from the very fine Complete Wave Guide.

At the moment the problem with Google Wave is that the a relatively small number of people have been given the equivalent of e-mail addresses and told to randomly e-mail each other. Unsurprisingly they’re spending a lot of time “e-mailing” each other about Wave. However, there is serious potential in Wave, aside from the traditional Waving about Wave I got lucky and managed to have a non-Wave useful discussion on Wave. It started with a thing that looked like an e-mail (I had a bunch of questions), my interlocutor started answering the questions in real time. Wave allows you to launch chat at any point in an e-mail, not only that it always you to see  your colleague typing character-by-character. In earlier forays this had been irritating but for a ‘real’ question it was actually rather useful – I could see my colleague getting the wrong end of the stick and put him right promptly. We managed to usefully flit between several conversations, adding things as they occurred to us and the end result is a nice record of a branching conversation.

As a wiki / document preparation system I’m less convinced. The core formatting available in Google Wave is fairly basic, although it can be extended significantly using gadgets and robots, but I can’t see it being a comfortable way of working together on anything other than quite a short document.

I can see this being a great replacement for interminable e-mail threads between multiple participants, and even a way of writing minutes for a bunch of people sitting in a room with each other. If Google Wave were ubiquitous and people were willing to use it, then it would be a significant improvement over e-mail. Ubiquity may be attained in the future for the domestic user – I could imagine it becoming available as an option in Google Mail. To be honest I see far more applications for the business user and there, for larger organisations, uptake will be much slower.

This leads to another issue, even if they have access will people use such a tool? I’m dubious about this, I work in the research arm of a large commercial organisation. So you’d expect this group to be more tech savvy than average, but uptake of new software is pretty slow, people have taken to instant messaging but not wikis, reference management software, revision control, all things you might expect them to find useful. Once you get past the standard business suite of Word, Excel, PowerPoint and Outlook enthusiasm peters out and arguably mastery of even these applications is limited. This isn’t a criticism of my colleagues, it highlights how difficult it is to gain traction with new software. When it comes down to it remembering how to use software is  hard and unnatural so not surprisingly we don’t do it very well.

Ultimately Google Wave is another tool, in a toolbox that is overflowing.