We are the angry mob

I thought this week I would talk about conferences, since they are something that is very much part of life as a scientist and which are perhaps are a little alien to people.

My first scientific conference was in Durham, where I did my PhD, I took the opportunity to find accommodation in the town before I moved up from Bristol. There was a problem with this: the conference supplied us all with name badges on which we were to write our names in our own fair hand. I was sitting opposite to an elderly academic at lunch who felt my name was somewhat small and indistinct. So I re-wrote it in large capitals with my biro, going over the letters repeatedly to get a “bold” effect. Now my handwriting isn’t great at the best of times, doing large-size capitals freehand has the look of the scrawling on the lunatic asylum walls. Later I went off looking at rooms in houses, but felt I was getting funny looks when I asked for directions. Later I realised why: not only did I still have my lunatic-asylum name badge on, I had it on upside down!

In many ways that first conference set the pattern for future ones, accommodation was primitive: in Durham Castle, which is used as student accommodation during term time. I met an old chap who, on hearing what I was doing swore blind he had done it all 10 years ago (I checked, he hadn’t, they never have). I learnt interesting things from esteemed academics in the bar.

For most the price of attending a conference is to present a poster, or a talk. This means I am accustomed to public speaking, just an odd sort of public speaking. In fact when I’ve had to speak at weddings, I’ve felt the lack of an overhead projector and had to resist the temptation to “thank the organisers for inviting me”, this is nearly appropriate but needs rephrasing. Conferences have also given me ninja buffet skills, and an appreciation that if you march off confidently in any direction (in my case in search of lunch), then quite a few people will follow you for no better reason than it looks like you know what you’re doing.

I’m not sure how widespread the idea of a poster presentation is outside of science, the idea is you convert your most recent work into…. a poster, a jumble of text boxes, figures and graphs (see below). If you’re flash, and organised, you print it out as a single sheet on laminated paper at some central service and then carry it around in a special tube. Otherwise you print it out on a load of A3 sheets. Posters are typically viewed in an over-crowded hall whilst drinking warmish white wine and eating finger food, text on the posters is normally too small and you’re too far away – the combination of these things always gave me a splitting headache. Supervisors attempt to get their students to defend their posters, that’s to say chat to anyone who wanders up. 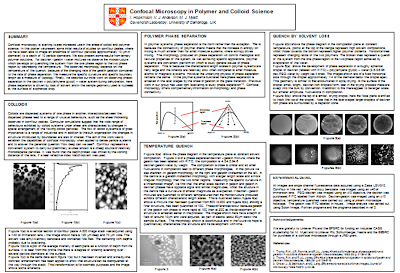 Conferences are where you learn all the interesting stuff that people don’t write down, like how it took some poor PhD. student months to get an experiment to work once and they’ve never quite managed it again, or how a little fix is required to get a numerical simulation to work. You also learn lore from the more senior members of the community: how X has been doing Y or small variants thereof for the last 20 years. How Z has been wrong for all of living memory. How W, although publishes great work is not a very nice man. You may get some idea of what someone’s master plan is (you’re certainly not going to get it from journal articles), you’ll get to appreciate that other academic groups work in radically different ways. I also learnt that science transcends barriers of language and culture, the scientists I meet on tour are my tribe, my closest relatives beyond my real family.

All these conferences mean I’ve done a fair amount of travelling, personally I don’t consider this a great benefit. Business travel rarely gives you much time for sightseeing and the places you end up there may not be sights to see, and if there were I’d much prefer to go with my wife rather than a random collection of other scientists. I’ve visited Rhode Island, Boston, Sante Fe, Heidelberg, Sitges, Akron (Ohio), Philadelphia, Cancun and numerous towns around the UK. The only upsides of Cancun were the tropical fish just off the shore, the ever present iguanas and the Mayan ruins, otherwise it’s an overpriced tourist hell-hole.

The best conferences I’ve been to have been the smaller ones, the invitation only ones, the ones where discussion is programmed into the schedule, the specialist meetings for young academics. The larger conferences tend to be soulless and confusing: which of the 10 parallel sessions should I attend? And is it physically possible to switch sessions? There is a fine conference in the UK for the polymer community, which used to be based near Moretonhampstead, but now lives in Pott Shrigley. The presence of the golf courses is significant here, the organisers liked their golf so we had a morning session, an evening session and an afternoon off for golf. The non-golf players went off for walks in the country, which was a fine bonding experience. I remember distinctly my future postdoc supervisor standing on a tussock in the middle of boggy ground suggesting to the rest of the group that we proceed no further. It turns out being a Fellow of the Royal Society does not guarantee good navigation skills!

Is there still a need for conferences, in these days of electronic communication? Although the prospects for online networking via various social media are great, currently uptake by scientists is pretty low in percentage terms and the bandwidth of the communication is low. The amount you learn about a person from just one face-to-face meeting is enormous compared to what you get through electronic media; electronic media are great as an introduction and for maintaining contact but there’s nothing like meeting people.

The “caverns measureless to man” title is in homage to the SIGGRAPH conference I attended in Boston, there were somewhere in the region of 20,000 delegates. It was held in the vast Boston Convention and Exhibition Center.