Book review: The Map that Changed the World by Simon Winchester 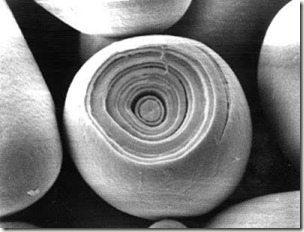 Nature is good a growing fancy structures. It takes air and water and turns them into sugar, a small molecule, which it then stitches together in chains to form starch and these starch chains arrange themselves into starch granules: organised structures with a diameter about that of hair, found in plants. The electron micrograph to the right* shows one that has been eroded to show some of its internal structure.I have my name on a couple of pieces of work on starch. I played a small part in the piece of work described here:

Tom Waigh was a PhD. student in the group I worked in, he was studying starch granule structure. This meant visits to the ESRF in Grenoble; source of mighty x-rays and a micro-focus beam-line, to do experiments. Tom had several days of beam-time, with experiments which essentially required continuous attention (a starch granule in the x-ray beam lasted 15 seconds), therefore a collection of warm bodies were required to press buttons and stuff through the night. Mike Butler and I stayed up late and pressed buttons. Florian Heidelbach and Christian Riekel designed and built the beam-line, and Athene Donald was the boss – supervising Tom’s PhD. and raising money to do the work. Starch granule structure is interesting and funding-worthy for several reasons: we eat lots of starch based things both natural like potatoes and not so natural, like Cheesy Wotsits; it’s used in processing paper and fabric and as a glue. There’s also work going to make plastics from starch, little extruded starch worms can also be found as a replacement for expanded polystyrene packing. Understanding starch granule structure is useful to people who run industrial processes, better knowledge of the granule structure leads to a better understanding of its processing properties which might lead to seeking out or breeding plants, which produce different sorts of starch granule, with different or better properties.There are two types of starch: amylose and amylopectin. Amylose makes shorter, less branched chains, whilst amylopectin makes longer branched chains. Starch granules are onion-like structures with alternating crystalline and amorphous regions. (Crystalline means nicely ordered, amorphous means not nicely ordered). Crystallisation in polymers is one of those puzzling things, how does all that long stringy polymer get folded up into such a nice neat structure. Blind physics is the answer, it’s broadly understandable but when I was active in the field it still wasn’t clear how it got started; once the nucleus of a crystal had formed, its growth was understandable but the formation of the nucleus was not so clear. X-rays tell us about the structure of things on very small length scales, since we’re interested in the variations in structure of an object only 0.1mm across we need to use an x-ray beam much smaller than this. The beam at the ESRF is only 0.002mm across so we can get a very detailed picture of the crystalline and amorphous regions of the starch granule. If you want to find the structure of a car by poking it with a stick, then you need a stick which is much smaller in diameter than the car. All we know of starch granule structure is summarised below:

The experimental procedure was entertaining: the starch granules were deposited on an electron microscope grid – a very fine wire mesh with numbers and letters allowing you to identify where you were on the grid. The starch granules were visible under a low power optical microscope, as were the numbers and letters. The numbers and letters were visible under the harsh stare of the x-ray beam but not the starch granules. So we would print out an optical micrograph, and take it off to the instrument hutch where we would get a shadowograph of the grid from the x-ray beam (sans starch granules). Then there would be a process of half-blind navigation, this was far from leisurely since once the x-ray beam was shining on the starch granule it lasted a few seconds before becoming irreversibly damaged. Once we’d found a starch granule we would take sets of closely spaced scattering patterns in a quest to discover the structure of the crystalline and amorphous bits of the granule.  It was like Battleships but rather more sophisticated expensive. To make a microfocus beam line you take the output of a synchrotron – a big wide beam of x-rays and direct it down a cone – known as a capillary. At some point we decided to be cunning and reduce the power of the micro-focused x-ray beam by offsetting the capillary so that the incoming x-ray beam didn’t hit the open end fully. This failed, because it turns out the beam wobbles up and down very slightly. What we should have done was put the attenuators in, but we were a bit tired. These experiments didn’t solve the structure of the starch granule, they filled in another little corner of the big picture. This is how much of science works. The story of the starch granule structure is one of a repeating theme in nature: it can do subtle things with structure without a large machinery to make it happen.
Update: Athene Donald has written on her side of this story -“Am I having impact?” some nice detail on the origins of the work and the problem of impact. *Images from Braukaiser.com