Book review: The History of the Royal Society of London by Thomas Sprat 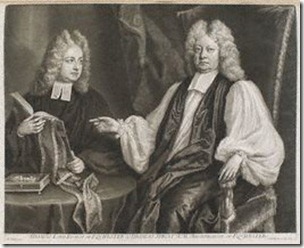 In which I venture into original material, in the form of Thomas Sprat’s “History of the Royal Society of London, for the improving of Natural Knowledge“. Published in 1667, under the direction of the Royal Society which had first met in 1660, receiving their royal charter in 1662. I must admit to having attempted to read this book a couple of times before and failed; the copy I have is a facsimile of the original therefore written in early modern English with heavy use of the “long s” inevitably leading to an internal voice with a pronounced lisp! It’s probably useful to replace “History” with “Prospectus” in the title, to satisfy modern tastes. Despite it’s age the writing style is surprisingly readable to my modern eyes.

Unlike any other book I have read the book starts with a dedication to the King, followed by a poem praising Francis Bacon (1561-1626). Bacon’s presence recurs throughout the book, Sprat clearly sees him as the intellectual godfather of the organisation. The book is divided into three sections; the first is a prehistory describing the state of natural knowledge before the Royal Society, the second section details the founding of the Society and the final section discusses the value of the knowledge the Society seeks.

The tour of prehistory is rapid; starting with the ancient priests who held knowledge to themselves, followed by the Greek philosophers (described as the Ancients) who Sprat feels were too fond of rhetoric in determining questions of knowledge and who he accuses of “hastiness”. The Romans receive relatively short shrift. Following the Roman Empire, Sprat sees the rise of the Church of Rome and a relatively barren period dominated by war, he cites here William of Malmsbury (1080-1143), an early English historian in support of this. He then bemoans the time spent by the Scholastics in what he considers pointless theology in the later period, presumably 1000-1500, William of Ockham falls into this group. Finally he comes to the recent era where he lists five groups involved in natural philosophising. Francis Bacon is cited reverentially once again, those taking on the philosophy of the ancients – tidying it up after it’s release from the abbeys in the Reformation, are less venerated. “Chymists” receive a mixed review with the more pedestrian welcomed but the alchemists, often seeking eternal life or some other fancy, are scorned. Isaac Newton, a later president of the Royal Society was a keen alchemist but by this time it was seen as not quite proper. He also comments on the coming of specialisation to different areas of science.

The founding fathers of the Royal Society started meeting in Doctor Wilkins lodgings in Wadham College, Oxford – it’s not stated explicitly when this started but it ended in around 1638 when the meetings moved to Gresham College in London. Sprat skims over the Civil War (1642-1651), although this period was clearly much on his mind in writing the book, then happily reports: “For the Royal Society had its beginning in the wonderful pacifick year of 1660”, the year of the Restoration when Charles II returned to the English throne. Sprat goes on to describe in some detail the guiding principles of the society, explicitly ruling out a teaching organisation citing the time required to do this and the potentially unhealthy Master-pupil relationship as damaging to the purposes of the Society. It is a principle of the new organisation that men of all religions and nations are welcome. This internationalism is a hallmark of modern science. Also highlighted is the idea that the Royal Society becomes a central repository for written information, the first of its kind. The Royal Society was funded from the subscriptions of it’s fellows, although they were open to public funding.

Sprat then provides a rather detailed description of how the Royal Society is constituted including how they go about their business in terms of doing and reporting experiments, I must admit to finding this a bit dull. It has the air of an organisational fanatic describing his perfect organisation, it’s questionable how closely the Royal Society managed to keep to this ideal. However, in his description of the processes of the Society we can see the genesis of the still used scientific literature, with the primary literature comprised of relatively short papers containing experimental results and theoretical developments based on those results. Charles II makes several appearances here, unsurprising given the recent granting of the Royal charter, but he also seems to have been moderately involved in the Society and had his own chemistry laboratory.

A substantial portion of the middle of the book is taken by a compilation of reports by the early Royal Society, these include:

I shall write on these reports in a separate post.
The book ends with a lengthy rebuttal of various criticisms of the Royal Society, including how “experimenting” is entirely compatible with the Christian religion and specifically the Church of England; this is perhaps unsurprising given Sprat’s occupation as a churchman. In addition to this there is the appeal that experimental philosophy as demonstrated by the Royal Society can benefit the nation by improving its industry and trade, including such things as importing plants across the emire. It also defends the interest of the nobility in this area, claiming that their country estates are the ideal places to conduct such studies, whilst the lower orders go off to fight wars!

Reading this book was an unusual experience for me. In contrast to the modern histories I more usually read I felt much more obliged to ask questions like: Why is this person writing this book? Why was Bacon so important? Is this some reverence to a politically important forbearer? Why the need for the book at all? A book length defence of such an organisation only 5 years after its formation seems a bit odd.

Reading this has given me a taste for contemporary material, I think I might have to look into Pepys and some original scientific publications.